Hey Poptropicans, more news on the Design Your Dream Island Contest is finally here — two months after the contest ended.

The third and final winning idea, which will be made into the game at some point, is Secret of the Jade Scarab Island created by Girl Power!

If you were starting to feel jaded (heh) about when Poptropica would get around to this long-awaited announcement, well, we don’t blame you! It turns out that the Creators reviewed all the submissions 12 times to determine the final winner, and that really took a hot minute.

So what’s this adventure about? We don’t know much yet beyond the name, as this is all the Creators have said about it so far:

We were looking for a great story, for intrigue, and for a great mystery to solve. We wanted something challenging, exhilarating, and that had a touch of real-world history to it.

And it’s certainly got one of the longest island names in Poptropica history, second only to “Charlie and the Chocolate Factory Island.”

UPDATE: Girl Power has commented on this PHB post to share a little more about her island idea! Here’s what she wrote:

The concept work I did for Secret of the Jade Scarab included lots of archeological references, curses, and Egyptian culture. The main plot featured the player investigating a string of accidents to determine whether or not a pharaoh’s curse was threatening an archeological dig site and visiting a nearby market to learn about hieroglyphics.

While we wait for more details to be revealed, we can draw some speculations from the name. Secret suggests a mystery to be solved, centered on this jade scarab: jade being an ornamental mineral and scarabs being a kind of popular artifact in ancient Egypt, often used in amulets or impression seals. There’s that touch of “real-world history”!

Scarabs were “typically carved or moulded in the form of a scarab beetle” and were often green or blue, though jade stone would not have been commonly used in ancient Egypt—instead, jade has roots in East, South, and Southeast Asian art. So the Jade Scarab may be a unique Poptropica invention, perhaps one that takes us across cultures.

Meanwhile, the Creators’ Blog goes on to share that the first Dream Island winner, which would be Fairy Tale Island, is already in the works, and it’s going to be different from the traditional island experience:

We have so many great things in the works for you this year and can’t wait to share them all! The first dream island is already in development and it looks SO GOOD! It’s a whole new take on an island experience and we think you’re going to love it!

Now that all the winners of the Dream Island contest have been announced — Fairy Tale Island, Goofball Island, and Secret of the Jade Scarab Island — we can look forward to these upcoming, promising adventures. 🧚‍♂️😜🐞 Fairy Tale is promised to release this year in 2021, but then again, if choosing the contest winners took two months, who’s to say when an entire new island will be ready?

Anyway, what are your theories on Secret of the Jade Scarab Island? Which of the winning islands are you looking forward to the most? Share your thoughts in the comments and on our Discord server, the PHC. 😄

Keep on popping on, Poptropicans!

Hey everyone! After hardly six days since the Creators’ first announcement, Arabian Nights Episode 1: How Bazaar has appeared on the Haxe map! And, as promised, it’s open for members and non-members alike to play.

I’ve just run through the new How Bazaar, and here’s what’s I found to report: it seems that, unlike Mythology Island, the Creators made the decision to keep Arabian Nights the same as its Flash equivalent. Most of the scenes remained almost exactly as those in Flash, and the only differences I could spot in the entire island were minor dialogue changes.

Better yet, I experienced very little lag whilst playing. Despite the pop-up ads between scenes, the gameplay was quite smooth! I’d say that overall, Arabian Nights has given me fresh hope for what can be done on Haxe. If Arabian Nights can be executed so well, maybe the islands still waiting for a port will turn out awesome too.

By the way, bring along the PHB’s Arabian Nights Island Guide for handy help as you play through the episode!

For the first time in a while, Quippy has appeared on time! You’ll find the little droid—sporting a cunning thief garb—in the Rumi’s Rugs common room, waiting to deliver his newest stash of Arabian Nights gear.

The Creators haven’t yet mentioned if the later episodes of Arabian Nights are planned to be released as well; although, in separate news, they did mention in their most recent post that they’ve already received hundreds of submissions in the Create Your Dream Island contest! Wow. Competition is getting real, and there’s still plenty of time left to submit your ideas! All this Arabian Nights stuff is sure to get creative juices flowing.

That’s all the news today! What are your opinions on the new Arabian Nights? What islands do you hope to see converted next? Share your thoughts in the comments!

Heyo, Poptropicans! Big news: the Creators recently announced that Arabian Nights will be coming to Haxe in less than a week! And, unlike many islands before it, it’ll be available to all players—non-members included—right from the release! Pretty awesome, huh?

It’s not clear yet whether the Creators plan to remaster Arabian Nights (like they did with Mythology Island) or if they’re keeping it relatively the same as the Flash version. Most players, myself included, weren’t very happy with the lack of challenge in Haxe’s Mythology; but who knows what’ll happen with Arabian Nights? A new island port is progress in itself, and the most we can do is hope that the new version turns out as awesome as the original Arabian Nights!

Speaking of Arabian Nights, this fun island trilogy was the winner of the 2013/14 Create Your Dream Island Contest! It’s not a coincidence that the Creators decided to release Arabian Nights at this time, to commemorate the current Dream Island contest happening right now. (There’s still plenty of time left to submit your island entries!)

In other news, a second Creators’ Blog post appeared not long after the Arabian Nights announcement, this one sharing a Halloween Poptropica fan video by Invisible Ring (inspired by the Zomberry Hero special event)! Though the post is quite late for Halloween, it’s never too late to be zombified. 🧟‍♀️ Check out the spooktacular video below:

There’s something in the title of the Creators’ post that caught my eye: “Video of the Week.” Hmm… is this another weekly promise? The store rotations that were planned to change every week don’t always live up to the promise, but it would be pretty great for the Creators to recognize their (very creative) fans with weekly videos. Between their showcasing of fan art in place of ads, social media spotlights, and now fan video features, the Creators have definitely been giving the Poptropica fandom lots of recognition lately!

Welp, that’s all for this one! What are your hopes for the new Arabian Nights? Thoughts on the Creators’ fan interactions? Let us know in the comments!

Update: Our 24 Carrot Island Guide for Worlds is here!

Hey Poptropicans, look what’s popped up on the map…

Wait, uh… no one cares about that. But there is something else that’s new on Poptropica Worlds: 24 Carrot Island! 🥕 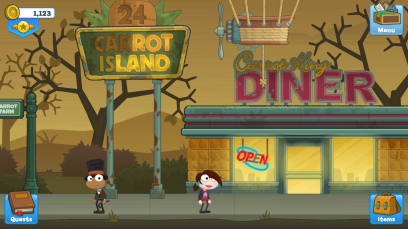 As we’ve rumored, it’s not a copy-and-paste version of the 24 Carrot from Poptropica Original, but rather a remastered version of the classic island. Those on the PHC who’ve already played the island have remarked that the differences include: an extended plot, improved scenery, and a new carrot museum. Considering the visitors’ center on Crisis Caverns, it looks like a museum will be a regular feature to new islands on Worlds!

We’ve also just added a guide page for the new 24 Carrot, complete with a written walkthrough and other tidbits here on the PHB. (You are welcome to help us out!) You can also find it on our Island Help page.

In other news, you can now buy swords for your house for 1 coin! That’s quite the bargain, even beating out the previous “cheap favorite,” the potted cactus (4-5 coins depending on whether you’re a member). It can be placed repeatedly with no limit, but will not save once you leave your house.

Update: This item seems to be gone now. 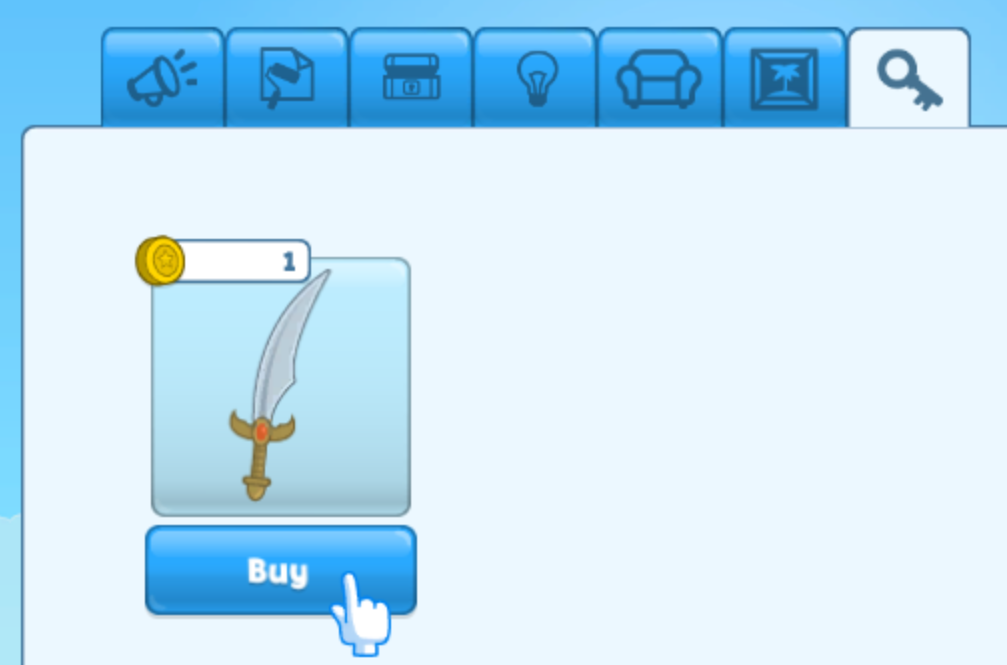 Finally, the clothes shop is currently promising 8 new summer outfits, but upon scrolling all the way to the end, I (and others) have yet to see any such new outfits. A glitch, perhaps?

Share your thoughts in the comments – the Creators tend to read them! 😉

Greetings Hawk-tropicans! This is Giant Hawk speaking, and today, the Creators have decided to reveal Poptropica’s next island! Well, at least some info about it… check out this pic: 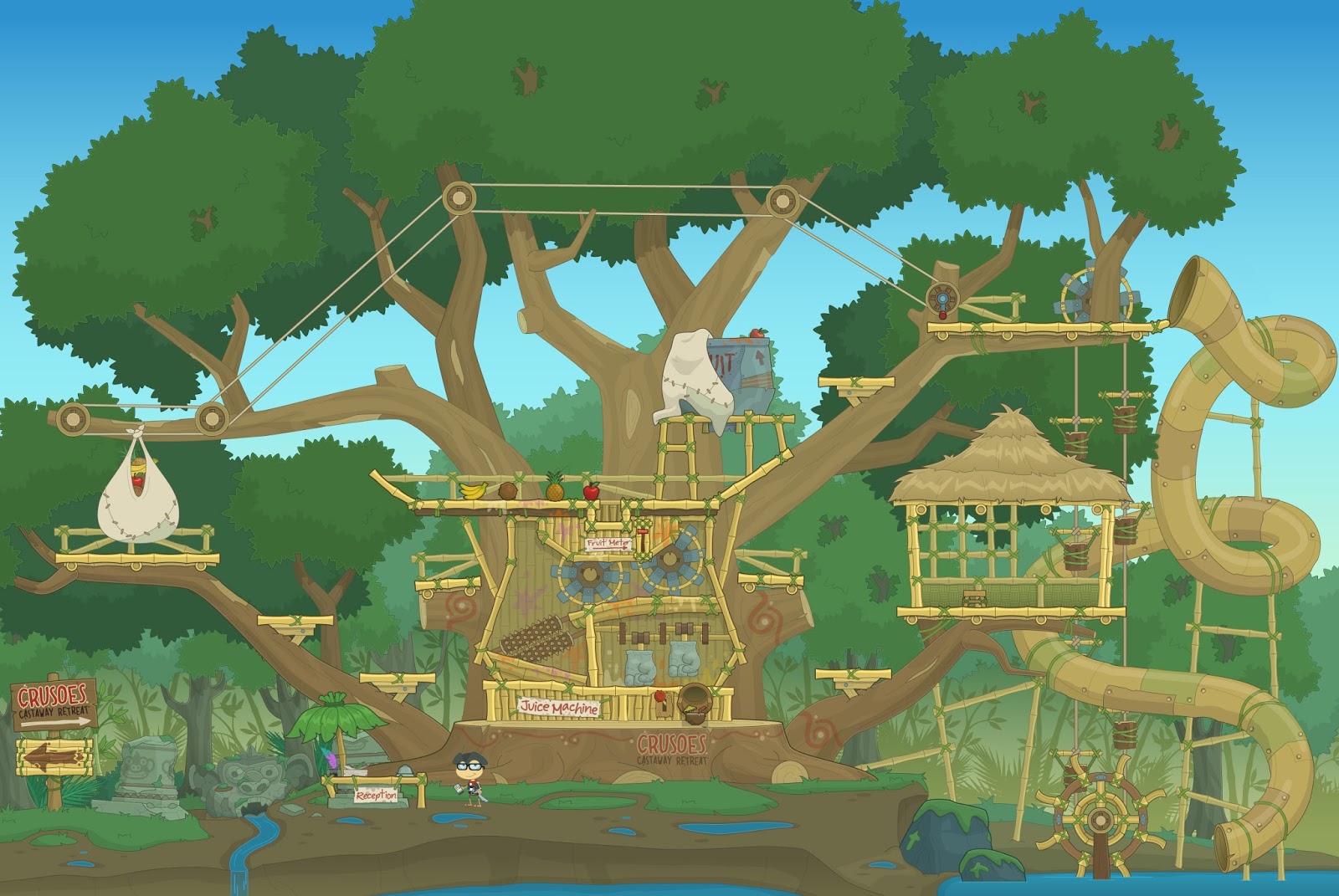 This is very cool looking! The sign tells us this is “Crusoes Castaway Retreat”, and based on the environment shown, this could be related to the jungle/aviation sneak peeks we’ve been seeing on the Daily Pop. The jungle-esque background is very nice, and is that a giant stone monkey head I see back there? The only problem is that the fruit on this large contraption/fruit stand structure is starting to make me hungry…

So, here’s what the Creators mentioned in their latest post (we’ve taken the liberty to emphasize the important parts in bold):

Well, we’re trying something a little bit different this time. We’ve got over 40 full Islands on the site already. That’s great for most players, but some of those Islands — okay, most of them — are very complex and challenging!

That’s why we’re putting our efforts toward a new Island especially for first-time players. It’s shorter than most, with simpler objectives. The idea is to let new players understand how to approach the challenges of Poptropica and give them the tools they need to crack some of the tougher Islands, like Escape From Pelican Rock.

If you’re already a Poptropica expert, fear not! We think you’ll like this Island too. It’s got some fantastic art, great gameplay, and hilarious characters. In other words, everything you love about Poptropica!

This sounds great – and as you may already know, sounds similar to a request Slanted Fish made in her open letter to Poptropica. (Plus, have you read the response?)

In other news, the Poptropica Creators’ Twitter (and other social media accounts) have recently been updated in a much more personal way with a new identity. The Twitter bio now reads:

The one and only official Poptropica Twitter account, moderated by Poptropica’s community liaison, Jessica (also known as Skinny Moon!)

The account’s avatar has changed as well. Gone is Zeus’ evil mugshot, and in its place is a shot of Skinny Moon, aka Jessica, the Creator who’s been running the Poptropica social media accounts lately. (Remember when we joined her Multiverse party?) 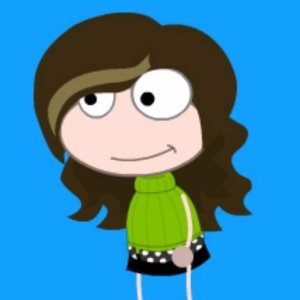 So are you all excited about the new island? Do you like the changes made to the Creators’ Twitter?