It’s Happy Lobster here, with a new Pop 5: about the best scenes, gameplay-wise, to have ever been created in Poptropica.

While island bonus quests are only available to members after completing the main island quest, Super Villain Island’s one probably tops all other bonus quests. The player gets to experience Mythology Island scenes from a much more thrilling point of view — all the colors are completely inverted, the player can only move upside-down — overall it ensures for an exciting play.

Kerplunk is a game show within Game Show Island, and it fully incorporates the ethos of Poptropica: running and jumping around. There are plenty of fun obstacles here, from running across slime-covered, turning platforms and trying not to fall off or get hit by slime, to dodging kicking mechanical shoes, to trying to land on a tiny hovering platform when thrown up by a massive inflatable — all while trying to be as fast as you can!

There are many obstacle cchases within Poptropica: being chased by Mr. Silva and his shrink ray in Shrink Ray Island; goblins in Twisted Thicket; Myron Van Buren and his dogs in Survival – just to name a few. But this chase, where you are both chasing Mademoiselle Moreau and being chased by policemen in Mystery Train Island, beats all the other chases, with excellent obstacles that vary immensely, unlike most of the other chases in Poptropica, and superb game art.

Armed with multiple ninja weapons, this section of Red Dragon Island requires great skill to pass through it. With samurais swarming all over the fortress, you need to be quick in action – from jumping to swinging to sneaking unseen. The fortress offers even the most experienced Poptropican players an excellent, exhilarating challenge.

Astro-Knights Island probably features the greatest boss battle in Poptropica. The player has to fight Binary Bard from the perspective of his owl, Merlin, to try and save Princess Elyana, while dodging his eternally-swinging swords, shooting laser and flying stars that follow you around – while trying to actually damage Binary Bard by getting close enough to him and trying not to die from his relentless attacks. The design of the cathedral and Binary Bard’s knight automaton is simply spectacular, and is no doubt one of Poptropica’s defining scenes.

And with this Pop 5, I am also leaving the PHB.

I’ll keep this short and sweet, but no I longer do I have the same passion for blogging about Poptropica as I did in 2016, when I joined the Poptropica community as well as the PHB. This doesn’t mean I dislike Poptropica, but I also have other things to focus on in life. I’ll still be in the Pop community to a small extent, like posting some Poptropica art on my DeviantArt account, or very occasionally going onto the PHC chat on Discord.

I’d like to thank the ever-helpful PHB team, as well as other members of the Poptropica community during my time here for their amazing support.

A new Poptropica Portfolio is here – and in this case the featured artist is Kyle Fox, a designer who has been working with web and mobile products for kids for over 10 years now. He’s posted lots of his work with Poptropica and Poptropica Worlds on his Behance portfolio, and it’s pretty impressive!

First up, we have a Zomberry Pitch Bible, a compendium of Zomberry information used to pitch the idea of Zomberries as “The Walking Dead for kids.” Essentially it’s a series of infographics covering everything Zomberry Island, like the details of the Zomberry outbreak, setting, Zomberries themselves, and more. (Click on the pics to enlarge them!) 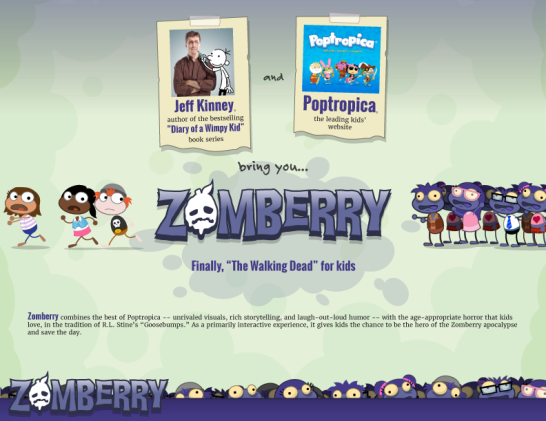 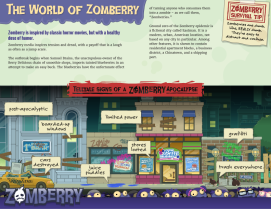 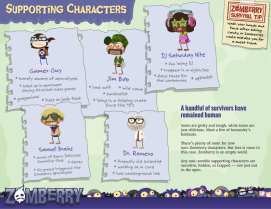 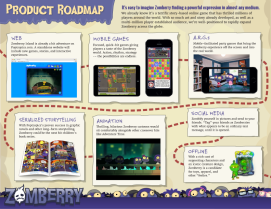 He’s also made some spectacular art for past advertisements on Poptropica. Check out the ad designs for Moana, Mr. Lemoncello’s Library, and Coco!

Then we come to some character designs, which include Poptropica Worlds Mythology Island NPCs, plus store costumes of modern styles, Wild West fashion, and the app-exclusive Fall Fashion and Winter bundles. Also, jungle animals for some ads. 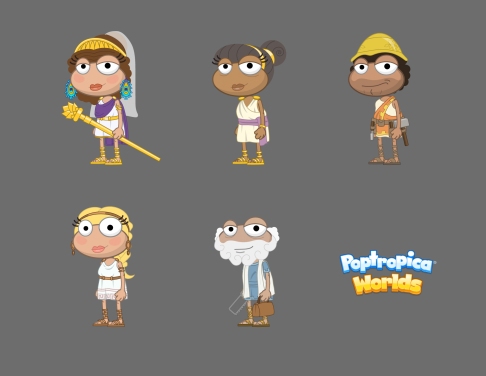 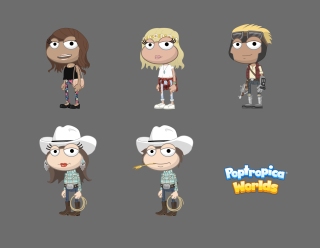 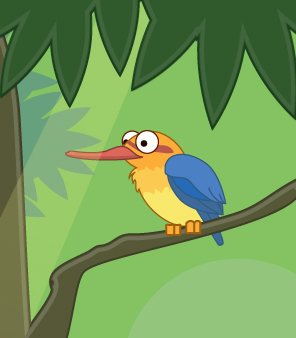 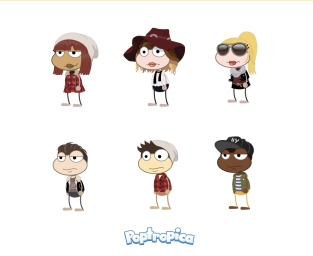 Kyle has also built up a small but impressive collection of printable posters for various islands, including Virus Hunter postcards with body-themed puns, Zomberry prints resembling movie posters, and a Monster Carnival poster reminiscent of a circus flyer. 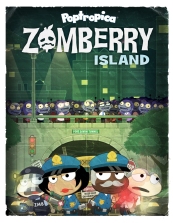 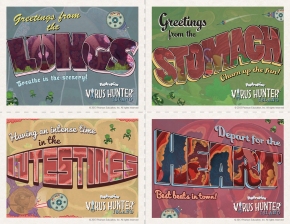 Quite a few infographics on Poptropica for the years 2012 and 2016 are also among his works. These cover descriptions and statistics about various islands, the Friends feature, and Poptropica as a whole. 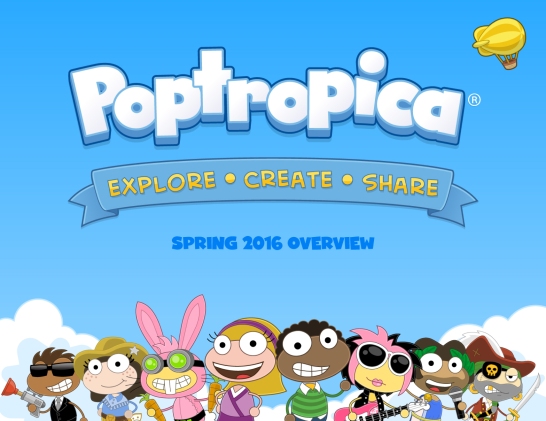 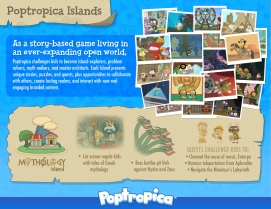 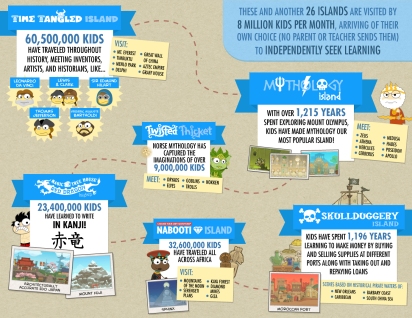 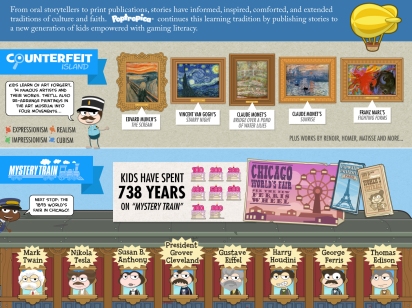 Additionally, Kyle has engineered sound effects for Worlds and composed music for Poptropica. The most noteworthy in his collection is a demo of a proposed theme song for Poptropica, which has never been used (but totally should be!). The playful tune incorporates a tropical theme, with flutes, various percussion instruments, and ends with a group of kids singing in chorus: “Poptropica.”

There’s lots more Poptropica work for viewing on Kyle’s Behance site. If you enjoyed these highlights, check out the rest of his portfolio here!

Hopefully you enjoyed this Poptropica Portfolio! If you did, you might also like the many other Poptropica Creators’ portfolios we’ve featured here. Check them out, too!

It’s Happy Lobster, with some sp00py updates for Poptropica Original! First off, if you head over to the Store, you’ll find old Halloween favorites back and moved up to the front of the selections. 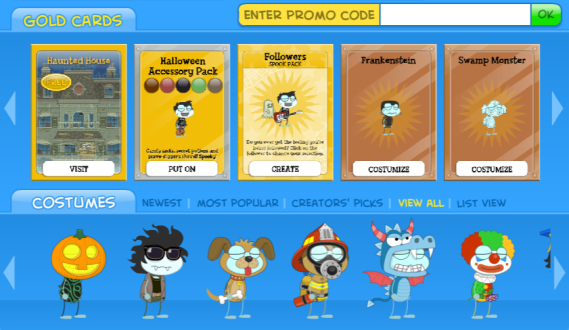 To celebrate Halloween coming up, the Creators have placed at the front of the Costumes section in “Newest” and “View All” sections a handful of Halloween costumes: the Pumpkin Head (which you can also activate using the hotkeys Ctrl + Shift + P without having to pay 275 credits), the Vampire Boy/Girl (which is absolutely free, by the way), and the Clown.

As for the Gold Cards section, there’s the Haunted House (miniquest guide here), the Halloween Accessory Pack* (which released last year), Followers Spook Pack, Frankenstein’s Monster* and Swamp Monster at the forefront for this Halloween. ( * indicates members only)

Moreover, the Creators’ Blog post states that the Haunted House mini-quest is “back for a limited time only,” so better get on it now because it’s not staying year-round! They also state, erroneously, that “The Haunted House is free with Membership” — but this is not the case, as non-members can get to it too (notice the “free” label on the card). Besides, why would they ever, ever make the Haunted House members-only?

Update: The Creators’ Blog post has been corrected, per our suggestion.

By the way, if you haven’t already, make sure to participate in both the PHB’s 9th Annual Halloween Costume Contest and this month’s Community Creations, with the theme of Halloween! We look forward to all your sp00py entries! 👻

Thanks for reading this post, and see you soon!

Heya there! It’s Happy Lobster, with yet another Pop 5!

So, Poptropica is full of brilliant and likable characters… but there are also a lot of Poptropicans who are more than a bit of a pain to be around. This post is all about the latter. Here’s a list of 5 characters who are out to ruin Poptropicans’ lives!

Well, this slightly pretentious warden from EFPR Island isn’t exactly the most likable person: he has no respect for any of his prisoners (which maybe isn’t a great surprise, being the warden of a prison), particularly you.

That’s to be expected, but still, he’s a little more cranky than your average prison warden.

For the king of the gods in Greek mythology, he definitely doesn’t make a great impression throughout Mythology Island. From sending you off to collect some sacred items in return for immortality to laughing in your face once you obtain them, he’s definitely not doing you any favors… just trying to dominate Poptropica.

Then [spoiler], when he re-appears in Super Villain, he asks you to fetch some more powerful objects, and once you get them, he laughs in your face and tries to take over Poptropica, again. Bit of a one-track mind, Zeus has. 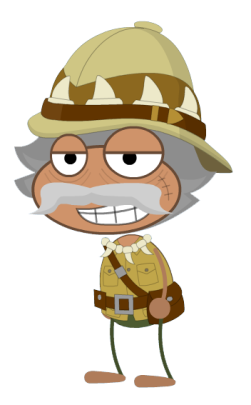 Over in Survival Island, MVB spies on you during three of its episodes, where you nearly freeze to death, nearly starve to death and nearly fall off a radio tower multiple times. Then, when you manage to get the radio tower working, he conveniently arrives to rescue you as if he only found you because of the radio.

Then he gives you a warm bed, a “kind” gesture only slightly ruined by giving you a poisoned meal to make you drowsy, locking your bedroom door, and then announcing that you get the honor of being the subject of his hunt, as if you were some prize animal. Well, at least he fills just about all villain conventions. 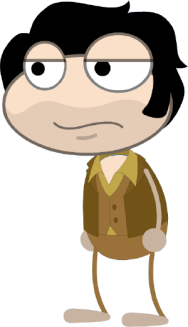 Kirk Strayer is supposed to be one of the greatest and most famous actors of all time in Poptropica. (Well, I’d never heard of him till I set foot on Back Lot Island, but I digress.) Anyway, when you actually meet him in person… well, he turns out to be a bit of a disappointment.

He throws a temper tantrum when you interrupt his acting and storms away to his caravan, forcing you and the director Carson Willis to chase after him. He says he’ll only come out if you fetch him a “half-caf leviathan latte-espresso, on the double!” and throws a coffee cup out of the window. (Well, at least you learn some random coffee information no-one asked for.) Then, you find him arguing with Carson yet again about how he doesn’t want to act as a gorilla.

Well, at least he does a exceedingly superb job of acting a spoiled brat. 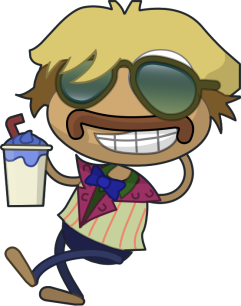 This guy was the whole reason the Zomberry epidemic began – it was all because of his infected blueberries – and, to make up for it, he gives out his deepest sympathies and apologies about it by… giving free certificates for his own smoothies?!

Moreover, why does he look like he picked out his outfit while blindfolded? Maybe that’s one of the reasons Sarah Snooty didn’t enjoy her birthday party so much. For someone with the name Brains, you’d think he’d have some, huh?

And on that note, that concludes this post. Is there any other Poptropican who’s even more irritating and annoying who deserves to be on this list? Share your thoughts and loathing in the comments below!

This round has ended. Check out our Poppies 2017 Recap to see who won!

Hey, Poptropicans, welcome back to the PHB’s 2017 Poppies, where the second part of the Poppies is just commencing: the voting round!

Not sure what the Poppies are? Take a look at this post.

Anyway, the nomination round has ended, so hopefully you had a chance to nominate! If not, don’t despair: the poll for the voting round is now open!

What’s the Voting Round, you ask?

The voting round includes the same categories that were in the nomination round, but this time you’re voting from a smaller pool of options under each category. These options (about 5-7 per category) were the most popular nominations from the first round.

You may also notice a few new categories in this round that weren’t open to nominations in the previous round, due to options already being set. These categories are: Best Adventure Island, Best Common Room Game, Best Tribe Common Room, and Best PHB Author.

The Voting Round closes on Saturday, July 22, so make your voice heard while you can!

We’ll be announcing the winners LIVE at our PHC party next next week, which will be on July 26, the PHB’s birthday. You won’t want to miss it! We’ll keep you posted on more details in the following week. In the meantime…

Keep popping in to keep up with Poppies events throughout this month!