Out of a hole in the ground, you emerge into a spooky graveyard, cluttered with grave stones and a single crying angel. As you get near the house, you see a sign on the old boarded up door. “Gone to the grave. Fill our yearning.” That’s what it says.

You try to open the door, but it is boarded shut. To the side of the house, you find a small locked door to the basement. Try as you might, you cannot get the door open. Right as you’re about to give up, a blue bat swoops though your hair and hits you with a heavy key. “That must be the key to this hatch,” you think to yourself. After chasing the bat up to the roof of the house, you finally catch it and grab the key from its feet.

As you open the basement door, years of dust and grime blow into your face. When you step in, something white and sticky engulfs your face. “Oh, gross!” you yell as you pull the spider webs off your face. As you walk down the old creaky stairs, you notice writing on the wall that says “Find the Draught of the Dead” and a barrel full of kerosene, a type of fuel. “I don’t know what that means, and I don’t need any kerosene right now, but I’ll remember this for later…” you mutter to yourself.

Further on in the basement, you see a water boiler and a furnace. The odd thing was, all the pipe pieces to connect the two were out of place and floating in midair. By rotating the pieces, you reconnect the boiler and furnace to make it work again.

Suddenly, you’re swept up in a burst of steam from the boiler and launched up onto a high shelf. Once you regain your feet, you notice a bottle of red liquid with a skull and crossbones on it. “Perhaps this is the ‘Draught of the Dead’ I was supposed to find,” you think. You look to the right and walk up the stairs that were there.

“Looks like nobody’s lived here for years. Nobody still alive, at least,” you think as you notice the pearly (and transparent!) white cat licking itself in the corner. You slowly approach it and after much questioning, it tells you more about your quest. “When the 4 treasures are found, I will guide you to the dead,” the cat tells you.

With that in mind, you enter the kitchen and notice yet another eerie message on the wall. “Ice soothes the burning dead,” the wall reads. There was a freezer, but you have no way of getting any ice, so you move on to the next room. Walking down the halls, you notice the painting eyes fallowing your movements. You ignore this and continue on.

Still in the hall, but up the stairs, you trip over one of the suits of armor. It makes you so mad, you jump on its head. You must be stronger than you thought, because you knock the knight’s pickaxe right out of his grip. You grab it for future use.

You walk up another flight of stairs and enter the room on the right. Upon entering, you find that you were nearly hit in the head with an arrow with a note on it. The note said: “Fly to find the chalice.” As you walk along to check out the rest of the room, you spook a spider on the ground and hear a crash downstairs.

You run down the stairs to find a floating broom that had fallen off the wall. You hop on and fly back up the stairs. While flying around in the other room, you find a secret passage to the attic through the ceiling. You spot an ancient chest with a puzzle lock on it.

You study the movements of the puzzle pieces carefully, and when it stops moving, you find that you can solve it simply by retracing the moves it made, but in backwards order. You quickly complete the puzzle and take out what you find: a spooky ancient goblet with green jewels set into the rim. “I’ll keep this for later,” you tell yourself.

After going back down from the attic, you enter the room to the left of the stairs. You notice the phone ringing, so you pick up. “Darkness fills the grave. Find our light when midnight strikes twice,” a ghostly voice rasps at the other end.

“Midnight strikes twice…” you mutter again as you spot the two old clocks to the left. As you hover your hand over the one on the left, it goes faster. If you hover your hand near the right one, that goes faster. After much trial and error, you finally get both clocks to strike midnight at the exact same time. A small lantern slides out from the fireplace and you pick it up.

Back downstairs, you use the knight’s pick you found earlier to take some ice out of the freezer. Examining your inventory, you realize, “These must be the four treasures! The draught, the chalice, the lantern, and the ice. Now, I’ve got to talk to that crazy little kitty again.” You walk back over to the ghost cat and show it the four treasures you had collected.

Unfortunately, it turns out that you’re not done yet. The cat tells you to return to it once the lantern was lit. “Where am I supposed to light a lantern around here?!” you yell in confusion. And then you remember the kerosene. You go back down to the basement and light the lantern using the kerosene.

Now with all four treasures properly prepared, you go back upstairs and speak to the ghost cat again. You are told to “bring the treasure to where the cherub cries.”

So you go back outside to the weeping angel statue near all those gravestones that were mentioned earlier. Now that you have the treasures, you notice a deep hole that had been dug out near the base of the cherub. Against your better judgment, you decide to enter.

Underground, you see several dark figures staring at you through the darkness. Witches, mummies, and even a Grim Reaper (as well as so many more!). This was true nightmare. “Thank you for returning the items needed for our party,” the witch congratulates you. 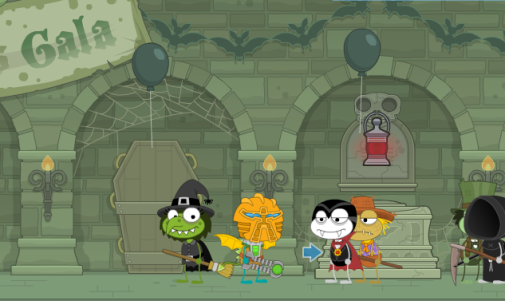 So, it was just a huge Halloween party for the dead! The draught and ice were just punch for the chalice, and the lantern was for light. The witch awards you credits to spend at the Poptropica Store, and your work here is done. The End.