Hey everyone! Have you checked out Galactic Hot Dogs Island yet? The Creators just released their official video walkthrough! But if you prefer a written guide, we’ve got one with pictures right here that will help you on your quest. 🙂 You can see the video walkthrough below:

You may or may not have noticed, but the Creators didn’t release PoptropiCon Ep. 3: Reign of Omegon yesterday (Feb. 5) despite what they said earlier in this tweet:

So, I decided to contact them, and they said that the island will probably come out next month because they are swamped over at Poptropica headquarters.

I hope they can get the final episode out soon! I want to defeat Omegon!

Lately, the Creators have been posting a lot of creations made on Poptropica Realms by Poptropicans all over the globe. Check out this or this post for some recent batches. Plus, here are two more remarkably amazing Realms they recently tweeted:

Wow – my favorite is the pirate ship! Anyway, that’s all for now! Tell me in the comments what you think about PoptropiCon Ep. 3 being postponed, and your thoughts on the Realms creations. 🙂

Hey guys! This week, the Creators have been sharing a ton of Remarkable Realms creations (mostly over Twitter), so just sit back and enjoy! 😀

Amazing work! For more on Realms, check out our Poptropica Realms Guide. Other than Realms creations, the Creators have also shared PopStorm #13, which might raise some eyebrows… if Poptropicans had eyebrows.

In other Twitter-related news, a recent tweet from Poptropica reveals that they are indeed planning for a Poptropica show someday, as we’d suspected!

@furrby01 Love it! Hilarious, our favorite tweet of the month! Or, she can see into the future…as we plan for a Poptropica show someday!

And finally, the PHB’s Galactic Hot Dogs Island Guide – written by our very own Brave Tomato and Blake – is now up! Speaking of GHD, the comic’s font is called Arnold 2.1 (thanks to Poptrickia for the random tidbit of info!). You can download it for free here.

Yeah, I know. I haven’t posted since November. Yell at me all you want.

Anyway, remember how the official Poptropica Twitter page teased us with something called Poptropica Realms? Well, the kindly Creators over on the official blog, fresh from their winter hiatus, have just officially announced this updated version of Land – starting with a video trailer:

Although not revealing much new, the trailer looks like it would hype willing players (even non-members!) to take the challenge to see what they can do.

Also, there is an official tour page for Realms, which hasn’t changed much from the Lands page besides the new title and video. This is intriguing – and although it’ll be open to everyone, members do get bonus benefits according to the official description:

Everyone can create and explore Poptropica Realms, but only Poptropica Members can unlock its true power! With Membership, create even more new Realms, and share your creations with the Poptropica Creators. You’ll also get exclusive props and decorations to make your Realms truly unique.

We know we’ll get to create new worlds and planets to share with people, but I wonder what other new things Realms will give to the table that Lands didn’t already…

The Creators have released yet another Galactic Hot Dogs sponsored quest video on their official YouTube account, this one for a new ad that’s on Main Streets.

Thanks to Slippery Raptor for the pics & insight into the ad –

The exterior of the advertisement shows the Neon Wiener with a smoking large hole behind it. When you enter, a short clip will play, showing the Neon Wiener blasting off into space.

Inside, you can talk to Humphree on your right and F.R.E.D on your left. Moving along, there are a couple of dummies (Cosmoe and Humphree for boys; Princess Dagger and Evil Queen Dagger for girls) you can Costumize from. To your right, Princess Dagger and Cosmoe are guarding the Mega Dog. By clicking on the door to the right, you’ll shoot lasers with two Jacks, Cosmoe, and Princess Dagger.

Isn’t GHD Island supposed to come out some time this month? Hmm…

In other news, the first Arabian Nights episode, How Bazaar (“and robbed from afar!” Okay, I need to stop lyrical connections…) is now available for FREE on iOS devices!

(For Android users, “How Bazaar” has already been released.)

One more thing before I go – according to Poptropica’s tweet, this is “Early concept pencil art. For something. Something February-ish.” 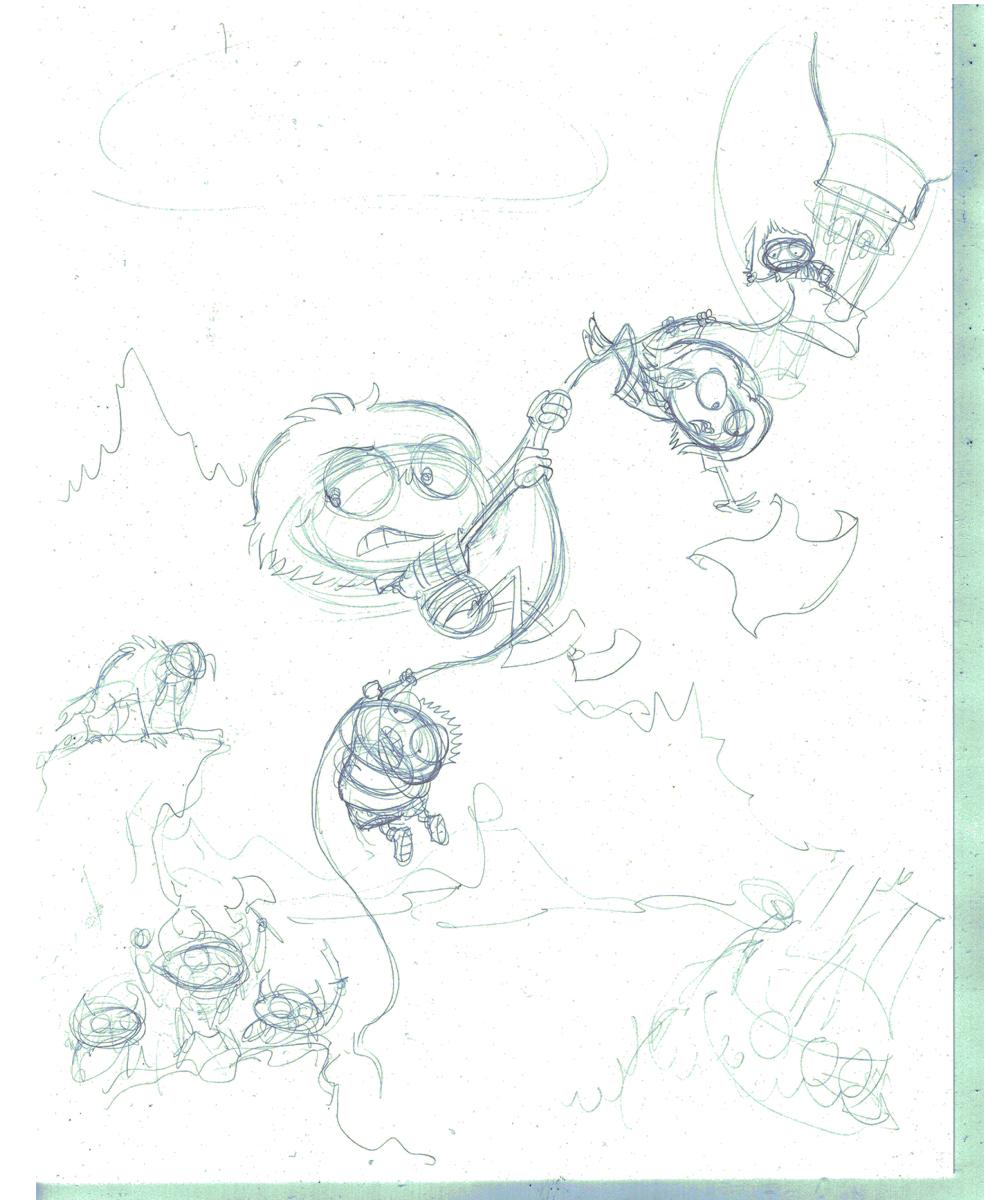 Could it be the cover for the Poptropica comic graphic novel? Is that guy in the blimp… cutting the rope from the protagonists? Uh-oh…

On that note, BT out!

Happy holidays from the PHB! It’s been a great year and being part of the PHB has been absolutely amazing. You guys really welcomed me and it’s just been really awesome. 😀

Of course, the Creators want to wish us a happy holiday too!

This is by Kory Merritt, the artist for the Poptropica comics. Hehehe, I love the Neon Wiener (Galactic Hot Dogs spaceship) in the background.

But that’s not all! Another Poptropica Creator, Dr. Lange, unexpectedly made a tribute to the PHB.

This is just the best way to top off the year. I love this so much!!! Thank you, Creators! 🙂

They also recently tweeted a couple more behind the scenes pics. First up, “a paused project….”

Well, it looks like a comic to promote an island, like the Virus Hunter: Pandemic Panic comic series from before. For what island, I’m not sure. However, it does look a bit like the abandoned geological park idea that surfaced in the Daily Pop in July 2013, around the same time sneak peeks for the underground cave island showed up. Could they be related? Will this ever be a complete island?

Rock of Ages: A very faithful bit of old geology.

Range Rovers: The park is in capable hands.

Mouth of Madness: Are you sure you want to step inside?

Pooled Resources: Value is in the eye of the beholder, of course.

The Creators also shared this Poptropica Realms sneak peek (see below). The caption: “Just grabbed from a Poptropica Creator’s computer when she snuck out to do some shopping.”

I personally can’t wait for Poptropica Realms! 😛 In the meantime, members can still play with Poptropica Land – and if you need a guide, we’ve got one right here!

That’s it for now! Happy holidays everyone!