Hey Poptropicans, here’s the latest on the not-so- paradisiacal Paradise Island. (If you haven’t already seen them, catch up on our first and second updates so this post will make more sense.) As promised last time, we’ve got a beach party coming! 🏖

Your phone notifications will tell you there’s ice cream on the promenade—and there is, but it’s exactly the same as what’s been on Home Island all summer, so y’know, been there done that. A few new decorations show up on your island, but it’s nothing compared to the mystery blonde girl’s party from the previous day.

Also, despite the notification message, nothing special happens when you change your outfit, nor is there anything new in the surf shop. So let’s move on to the only other part of this beach party…

You’ll also be sent a new task to “play the head-2-head game,” and if you head down to the sandy shore, you’ll find a game of Balloons waiting to be played. You remember Balloons, Poptropica’s reverse Connect-4 two-player mini-game, right? It’s found its way here with a twist! 🎈

If you manage to get an opponent to play “The IslandPartyBalloons” (and it did take me a few tries to connect with someone), you’ll find that it’s not the gameplay that’s changed compared to the classic (which can still be played in common rooms). Instead, the scenery has gotten a beach remodel and the balloon colors have been altered, too! (Also, check out our Balloons Guide for tips.)

Despite winning a game, that task never cleared up for me, so it looks like the Creators still have some work to do here. I also haven’t gotten any other new notifications or tasks on what’s coming up, so perhaps this is all for now?

🤔🏖 Wondering what other Poptropicans think of Paradise Island? We break it down in our previous post about this new idle-gaming feature with players’ hot takes from the PHC. That’s our Discord server, which is always open for Poptropicans to hang out and have a good time. Come join us!

🏅🏋️‍♂️ The Pop community has also been buzzing with excitement over our recently concluded 2020 Tribal Tournament, which ended with a party of our own—a grand old time in the ruins of Poptropolis. Catch the recap to find out which tribe reigns supreme, enjoy some good art, and more. Until next time~

note: The party has ended; thanks to all who came! Click here for a recap! 🙂

Hey everyone! As you may have gathered from the invitation above, you’re all invited to join the PHB in celebrating Poptropica’s 7th birthday this Saturday, September 20th on our official chat, the PHC! I’ll also be turning 15, and I’d really love to celebrate with you all! Just to reiterate, here are the details:

Update: Poptropica retweeted our tweet about the party! Whether they’ll come remains to be seen, but it would be so cool if they did! Anyway, thanks for spreading the word, Poptropica!

For those who are unfamiliar with the PHC, that’s the Poptropica Help Chat, the official PHB hangout. It’s a great place to chat with other Poptropicans anytime, not just when we’ve got a party going on, and sometimes you might even get to meet PHB staff – I’ll be there for this, naturally!

The chat is moderated for safety and we do have rules to maintain harmony, so be sure to familiarize yourself with our chat policy and ranks on our Chat page, which you can find by clicking “Chat” in the menu above. Also, it’s okay to chat about other topics besides Poptropica while you’re on the PHC!

Anyway, hope to see you there! Bring your 7th birthday balloons for the big event! 😀

There’s been a new Creator’s Blog post, which Dr.Hare posted, and he even added some entertainment with it, a poem by the one and only, Robert Frost! What? You don’t know who he is? Well, take a gander at this page to find out. Anyway, back to the post.

Some say the world will end in fire,
Some say in ice.
From what I’ve tasted of desire
I hold with those who favor fire.
But if it had to perish twice,
I think I know enough of hate
To say that for destruction ice
Is also great
And would suffice.

I’m a credit-less deadbeat in Poptropica, so I can’t buy it. 😦

Oh well. Forget about the pain I have to go through not owning these awesome items and go buy them already, if you like them.

I leave you today with a picture of Mr.Frost. 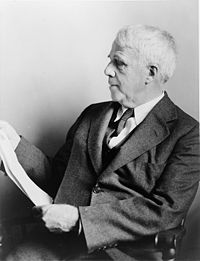 Yay! Good-bye 2008 and hello to 2009! Happy New Year from the Poptropica Help Blog! Hopefully, the new year will bring many new, exciting islands to venture on! And as always, we, the Poptropica Help Blog, will always provide up-to-date news and helpful guides! (In fact, we just added another game guide: Balloons! Check it out here: http:poptropica.wordpress.com/games/balloons/)
Happy New Year, everybody!