Welcome to another Ramble Review! This guest post comes from Incredible Fire, who will be rambling about Super Villain Island.

Super Villain Island is just as thrilling as it sounds. Poptropica’s 30th island has you slipping into the minds of the most diabolical villains ever. Full of twists and turns, this neatly pulls together some of Poptropica’s most iconic characters for a whirlwind adventure.

The settings themselves—a mysterious prison on a dark and stormy island, magical landscapes, ghostly ships—give off chilling vibes to all who dare enter. And the sometimes annoyingly difficult gameplay gives the island a challenging edge.

The plot — extracting the source of evil from a villain’s dreams, all Inception style — makes this quest an exciting journey. This island is bound to keep players challenged as they strive to save Poptropica. It’s also worth noting that other islands make an appearance here, effectively raising the stakes, and keeping Poptropica connected.

All in all, Super Villain Island is an enjoyable experience, thrilling players by bringing back so many iconic villains in a satisfying way.

Hope you enjoyed this guest post by Incredible Fire. If you did, be sure to check out the previous Ramble Reviews on Twisted Thicket and Ghost Story, and stay tuned for more! And of course, join in on the fun on the PHC Discord.

The Poptropica Help Blog welcomes interesting Poptropica insights from anyone in the Poptropica community with thoughts to share. You can find some tips and guidelines on our page on how to Write for the PHB, and share blog posts on the PHC.

Hey Poptropicans — friendly reminder that the PHB’s Land Construction Contest ends this Friday, Sept 5th, so if you haven’t sent in your greatest Land creation to us yet, get building and click here for the post with instructions on how to enter! Or, if you’ve made something that caught the Creators’ eyes like Magic Fire‘s self sculpture (she’s a PHB reader too – hi MF!) and Young Fish‘s panoramic port city have, you might even be featured on the Creators’ Blog! (click to view full images) 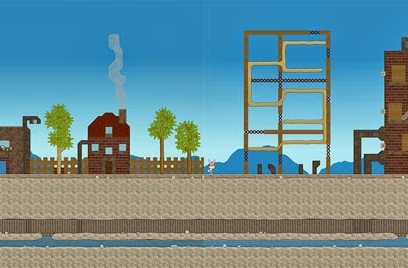 Have you ever wondered why Poptropica tends to release islands on Thursdays? While this doesn’t explain why Thursday exactly (Friday in some time zones), they did recently address the question (brought up by Poptrickia) via their official Twitter:

PoptropiCon (guide here) had its first episode debut just last week for members, but if you’re wondering what’s up next, a good place to look are the Daily Pop sneak peeks. Let’s take a look at what we’ll be seeing inside the convention center (click to enlarge images):

Collect Em All: Keep them in the original packaging and they may be worth dozens someday.

Victory: It’s in the cards.

The Help: With an attitude like that, you’ll go far.

Look Closer: It’s what’s under the cap that matters. 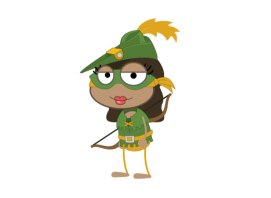 Silver Age: This archer gets right to the point. 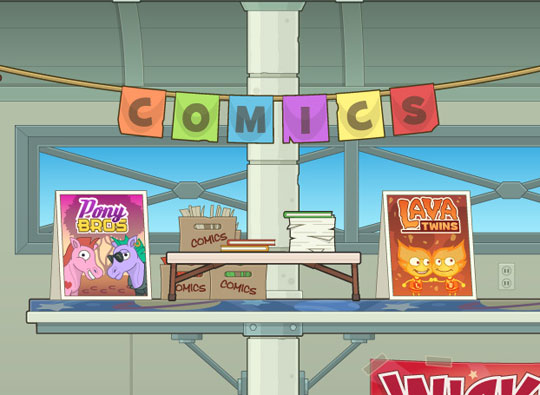 Brony: Don’t say no, here we go, off across the plain. 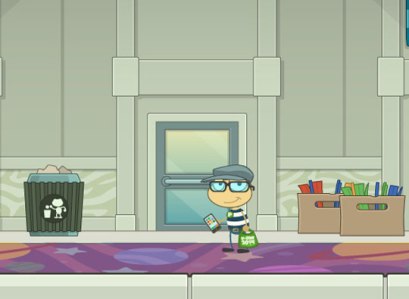 You Hall: The swag bag is loaded, but where’s the exit?

Off-Screen: But we’re monitoring the situation.

Among all the random tidbits, it looks like there’ll be a booth for a comic hero called Elf Archer — created by some guy called “Stan Ditko”: a reference to Marvel Comics co-creators Stan Lee and Steve Ditko. Plus, there’s even a Balloon Boy collectible that can be seen on a table!

And not far from the My Little Pony mimicry (“Pony Bros”… even the Daily Pop’s caption is “Brony”), there’s a poster for “Lava Twins” — it may be a long shot, but could this be a reference to a film called The Adventures of Sharkboy and Lavagirl? Yes, you read that right, “Shark Boy”: like the beloved Poptropica character who no longer is. (You can read all about the Shark Boy Mystery here!) 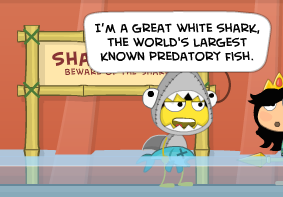 Although it’s been about two years and ten islands since Super Villain Island, Brave Tomato recently uncovered this little snippet of Poptropica Creator Jeff Kinney working on it on a computer. It may not look like much, but it’s a pretty neat find nonetheless:

This came from a “making of” bonus feature on the Diary of a Wimpy Kid: Dog Days DVD, where they talked briefly about Jeff and Poptropica. (Jeff is also the author of the Wimpy Kid series.) Speaking of Jeff Kinney, I wonder if/when we’ll get to see his ice bucket challenge? 😉

In other news, issue 19 of the PHB magazine, The POPCORN, releases this Sunday, Sept 7th, so be sure to have your creative entries sent in to phbpopcorn(at)gmail(dot)com before then! That’s all for now (or TAFN, as HP the hip one likes to say)! Keep on poppin’ on, Poptropicans. 🙂

You’re probably wondering about the title, and you should be — I have solid proof this time! Or not. But I’m pretty sure about this, so let’s get started! 😀

The picture above shows one of the numerous pop quizzes that abide in the Friends feature. This particular quiz challenges you on what your favorite Poptropica villain is – note that the villains in the list are the main ones – except one. Along with legendary villains such as Captain Crawfish, Black Widow, and Dr. Hare is a not-so-famous villain, El Mustachio Grande (from Wild West Island). Why would he be in the list? That itself seems odd.

But it goes even further; a Daily Pop from the developmental stages of Super Villain Island, which combines some of the most famous villains of Poptropica, shows an apparent mega boss combining the four villains of the island – but you may notice that along with the jester/bunny/artist/pirate look of the robot, there are a couple hints as to something else in the works. Notice the mustache and sombrero kind of hat – some main attributes of El Mustachio.

There still is one more thing about another Daily Pop around that time. Take a look at the sneak peek picture below. It’s showing a primary working of the Prison Lab where the sleep machine and Dr. Jupiter reside on Super Villain Island. Remember, there are only 4 main villains whose dreams you infiltrate – but there is one more sleep containment in the picture. It’s obviously meant for El Mustachio.

The question is, why was El Mustachio taken out of the island? Maybe because he didn’t have a Creator alias, or he wasn’t popular enough – but if that was the case, then what was the motive in the first place? Did he interfere with the story line, or did he just not cut it? What if he was put back into the SUI for Super Villain Island? That would be pretty awesome. 😀

So what do you think? Am I right about El Mustachio, or is my theory as weak as the Wild West Island pea shooter? Tell me in the comments. 😉

First of all, that island everybody’s been talking about, Super Villain Island, is now available to the public! If you are stuck while exploring the dark minds of four of Poptropica’s most devious foes, feel free to use our Super Villain Island Guide here.

In other news, the information page for Charlie and the Chocolate Factory is now up! Here’s what the island description reads:

After years of silence, Willy Wonka’s magical chocolate factory is re-opening, and you’ve got a Golden Ticket. But when a group of misbehaving kids threaten to destroy Wonka’s candy creations, he needs you to save the day. Prepare to untangle a confectionary conundrum that’s full of sweet treats and sticky situations!

So… from the sounds of things,  there are going to be SIX golden tickets instead of the usual five. Us, plus Charlie Bucket, Augustus Gloop, Veruca Salt, Violet Beauregard, and Mike Teevee.  I’m eager to find out what will happen. But as of right now…

There’s no knowing where we’re going!

The desktop wallpaper and the printable poster gives us a very first look at the star of the show, Mr. Willy Wonka himself!

And here are a few more images from the information page…

On the info page, there are also links to buy the original book as well as the movie. The PHB also has a page where you can discuss this upcoming island here.

This is going to be fun! We do need a little light in Poptropica since the atmosphere of Super Villain Island’s release darkened it.

Recent Daily Pops have been hinting at a new city-themed adventure… but what happens when the city lights start to dim? This sneak peek from the Creators’ Blog could be for an upcoming new Halloween feature!

He appears to be carrying a flashlight – is that what the battery bar is for down at the bottom left corner? Well whatever you do, don’t let that light run out… or Slenderman will get you. Maybe.

While we’re on the subject of nighttime, don’t forget that the members-only limited edition Night Hare costume will be gone from the Store when Super Villain Island is released to everyone next Thursday, October 18th! Grab it now while you still can. Super Villain is this year’s most popular island, Poptropica’s 30th island, and if you need help, our Super Villain Guide and other resources should have you covered.

Finally, check out our Fourth Annual Halloween Costume Competition! We’ve received lots of great entries so far and would love to see yours, too, if you haven’t entered yet. And even if you have, you’re welcome to enter more!