Hey Poptropicans, we’re getting right to the heart of Poptropica with OG Poptropica CEO/publisher Jess Brallier! We’ve shared his vision for Pop and even interviewed him here on the PHB before, but there’s more…

Jess recently shared a personal blog post titled “Storytelling, games, and Poptropica,” discussing how it all began with our favorite virtual world—and it’s well worth the read. (Thanks to Brave Tomato, former PHB staffer, for bringing it to our attention!)

The post starts off affirming the success of Poptropica co-creator Jeff Kinney’s Diary of a Wimpy Kid, and Jess ponders further potential…

What I really wanted (as I always did) was to publish stories for kids.  What was different this time, was that those kids were now intensely engaged in games.

Hmm.  There’s gotta be a gaming literacy with which to tell stories.

…considering that print, film, and theater all have their ways to tell stories. Jess goes on to share how, throughout his career, people didn’t take seriously his ideas for using gaming to tell stories to kids. That is, until he began collaborating with Jeff Kinney to create Poptropica.

The characters in the stories would be avatars.  The user would be the story’s protagonist.  So this avatar had to be human-like.  Able to fashionably dress in any historical or imagined time or place (just like stories!).  They would move—jump, slide, flip.  And express—facial emotions.  Just like humans.  This would not be a virtual world of cute little animals moving stiffly around getting rewards of bananas and apples. The art and design would be second to none.

Jess even quotes from an old PHB post, though without naming us. The commentary from “one critic,” about the scene of bubbles in Realms, comes from our post Pop 5: Most Beautiful Scenes in Poptropica, by Happy Lobster. Jess writes, “Good stuff! Our fans “got it.””

Jess continues his story of how Poptropica got started by describing the scramble to find room in the budget for two positions, a front-end and a back-end developer. They eventually track down Pearson’s CEO, Marjorie Scardino, who gives them ten minutes of her valuable time—and the green light to hire the people they need.

That wraps up Jess’s post, which you can read in full on his blog! The PHB reached out on Twitter to ask if he’d be sharing his thoughts on where Poptropica is at today, and he wrote back that he would. Considering how much the game has changed since his days as CEO, we’re definitely keen to hear what he has to say. Stay tuned with us!

The cool thing about all of this, which we thought about from day one, is if we did it right, we’d also be developing a next generation of storytellers, artists, and designers. Cool!

Top of the morning, Poptropicans! Today, we will be looking at a few store updates as well as a recent message from a special someone. Let’s take a gander now, shall we?

After decorating your clubhouse, why not gift your pets some St. Patrick’s Day costumes? Sure March 17th has already come and gone, but you can still dress your pets in festive green gear. Lucky pets can wear a Leprechaun Hat, a Clover Face, and a Green Backpack. 🍀

Moving on from the game to the real world, the official Poptropica Zazzle store has gone through some changes. There are some interesting new(ish?) items, like this Poptropica 8-bit Pixel Mug ($15.95) of Drs. Beev and Hare with a heart between them, a Poptropica Dr. Hare Button ($2.25) and even Dr. Hare Poptropica Wrapping Paper ($20.95).

Sticker prices have been lowered with most going from $4.95 to $2.15! Also, a Zomberry Clown Postcard is now available for purchase for just $1.10 (now the cheapest item in the store!).

To cap off this post, we a have a special update coming from the creator of Poptropica himself, Jeff Kinney! Yesterday, Jeff tweeted a photo of himself visiting three other OG Pop Creators during his recent book tour. It’s nice to see Jeff acknowledge Poptropica, even if he’s already moved on the greener (and richer 🤑) pastures.

That’s all for now. What store items (real or digital) are you looking to buy? If you were to meet Jeff Kinney or any Pop Creator, what would you ask them? Leave your comments below!

Hey Poptropicans! The Poptropica Creators have been on a roll lately with their social media, bringing us throwbacks, fun facts, and even a splash of magnanimity! Let’s pop in and take a look.

The Poptropica Creators’ Blog and Instagram spotlighted Jeff Kinney — the man who started Poptropica, yet is better known as the author of the Diary of a Wimpy Kid series — and invited fans to “let Mr. Kinney know how much Poptropica means to everyone” by sharing Poptropica memories that they promise they’ll share on social media and even with Mr. Kinney himself! You can create fan art, write letters, make videos, and more with the hashtag #ThanksKinney so the Creators can see.

On Instagram, the PHB (we’re @poptropicahare) asked if Jeff Kinney still gets involved with Poptropica’s development. The Creators liked the comment, but didn’t answer. Guess we’ll take that as a no…?

Other fans have been wondering about the founder’s silence about the game he created as well. In 2018, the PHB published a guest post that touches on Mr. Kinney’s deep investment into Wimpy Kid at the expense of leaving Poptropica behind. Even if he doesn’t come back to Poptropica, we hope his vision for the game can remain.

Still, #ThanksKinney for starting it all! And if you have Poptropica memories or creations to share, the deadline is September 20 (Sunday).

The Creators have been active on Instagram with two new stories featuring fan posts: one an animation of a dancing Binary Bard from @neon.bug, the other a fun fact about Monster Carnival characters from @happyclonetrooper. By the way, for more Poptropica fun facts, check out the trivia section at the end of all our PHB island guides!

Oh, and there’s more from Instagram: in an unusual act of spontaneous generosity, the Creators also reached out to Dimension Bros, the YouTuber duo behind Poptropica Month, to offer them free memberships! Here’s Theo’s first reaction of experiencing the Poptropica heavens open with access to newly unlocked features, including thousands of bonus credits to spend in the stores:

Theo also shared with the PHB that the gifted membership doesn’t expire until December 31, 2022 according to his account settings—which adds up to about 2 years and 4 months! That’s literally impossible for us regular plebs to attain, not counting auto-renewals, since you can only buy up to a year of membership at once.

This also seems to be the first time the Creators have ever given out free memberships outside of people winning their (and occasionally the PHB’s) contests. Pretty cool—hey Creators, want to hook us up too? 😉

In other news, as you may have noticed, the PHB website has a new look! Our previous theme from WordPress (which is the blogging platform we use) has been retired, so to keep things running for future updates, we’ve switched over to a new theme called Dara.

It may take a little getting used to, but we’ve tried to find one with similar elements to the previous. This new theme comes with bigger fonts and easy access to the PHB’s socials via the buttons on top, so we hope you’ll come to love it like we do!

And finally, after 8 days of tasks, achievements, and recycled gameplay, the activities on Paradise Island have come to a stop—at least for now. If you’ve made it past the day with the PoptropiCon “festival,” future days simply consist of logging in for daily credit rewards, which you can use to decorate your island, home, pets, or character.

With Poptropica’s birthday month in full swing, there’s plenty going on in the fandom these days! Join in on creating and/or watching Poptropica Month videos, party with Dr. Beev stans next week, make something mask-related for Community Creations, and of course, give a #ThanksKinney for making this all possible. Pop on, Poptropicans. 🎉

Captain Crawfish has announced Poptropica 3D HD. Or is it HD 3D? Whatever.

And 3D images from Skullduggery Island are there. 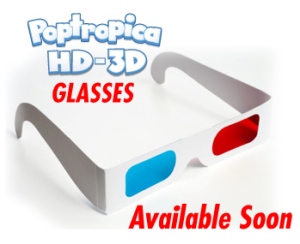 And suppossedly Jeff Kinney “approves” in a fake-looking quote.

Now, before you break your piggy banks, I’m pleased to remind you of today’s date: April 1st. There. Put the hammers down. Good. Besides, I have a pair of 3-D glasses stashed in a DVD that works with that image and for only $20 something dollars.

But like the nose thing last year, I don’t think this is really happening. I think this is the Creators way of mocking technology with its HD and 3D yakkity yak these days. XD

Now, not everything is a joke today. I actually found a promotion for Back Lot Island in the weirdest spot.

So I was wandering around on Night Watch Island when I encountered an ad.

No. It wasn’t an ordinary ad, though.

So… this is new. The Creators using the advertising spot to take a picture with Back Lot Island’s Kirk Strayer: well-known actor since 2 weeks ago. If you talk to him, he’ll say:

Those seem like epic images. And you click take photo… and a new photo is added to your album!

Now, I think there are a bunch of possibilities for your picture. Here they are:

…on second thought, I think this is the only result you get. I laughed at this, considering the epic preview images in the first screen when you first enter XD.

Oh well. At least we finally know who Kirk Strayer is. But what will go on with him in Back Lot Island? Only time will tell.

Greetings, everyone. Right now I’m posting about something major announced on the PCB. Let’s get right to it shall we?

Remember Poptropica The Official Guide? It is said to be released on October 13th. There’s guides in it, info, even a fold out poster. The guide is coming really soon, but to celebrate the creators have planned something very special 😉

A scavenger hunt will be run on Poptropica based on this book :D. This is a rare activity that I must say I’ve never seen anything like it on Poptropica. Three clues will be revealed each week on the PCB. You must have a copy of this guide with you to take part in the scavenger hunt according to the official webpage http://www.poptropica.com/books/official-guide-poptropica.html. Once you have found the answers to all three clues, you win prizes for that week! According to the website there are three scavenger hunts:

The scavenger hunts goes all through September and mostly through October. On the bottom of the webpage there’s a special video from Jeff Kinney titled “Jeff Kinney talks about Poptropica.” In the video the creator of the virtual game. The video is 2 minutes in length and basically explains the virtual world of Poptropica on “how to get started” and how “it’s an interactive and entertaining game.” Be sure to check it out if you have time.