It’s EP here with another new post. This one is actually a sneak peek, quite exciting! The creators have began to get us pumped up about the new islands coming. In the last post, there was a new trailer about a “legend coming,” possibly to do with Mystery Train Island. I’d say I’m pretty warmed up about this.

New minigame? I bet it has something to do with quickly taking the customers’ orders. Will this be a pre-island game like Shrink Shot? Or will it be a minigame actually in the island?

I’m thinking it will be a pre-release game, because if you look closely and examine the picture, you’ll actually see a gold sign that says “Mystery Train Island, coming soon” which just proves it will be one of those minigames like Shrink Shot released before the island is actually out.

PHB Header
Poptropica Help Blog staff member Coderkid worked hard to create a colorful Shark Tooth header for us to enjoy! You can view it at the top of every page at the PHB. Also, be looking forward to an upcoming Christmas header from graphics designer Codien!

New Store Stuff!
Shark Boy from the Poptropica Creators’ Blog changed his avatar in honor of one of the two new costumes to arrive at the Poptropica Store – the Tiger Shark! (Notice the amazing dead fish!) For girls, you can also pick up a Swan Ballerina outfit. Thanks to Xarr for this update.

Tiger Shark – Basically looks like the shark costume from the Shark Museum at Shark Tooth Island. But with this costume, there comes a twist where the boring gray color of the typical shark becomes a thrilling striped orange. You can also Customize the awesome fishy and toss it in the air by pressing the space bar!

Swan Ballerina – The title says it all! It’s a pretty dancing ballerina costume mixed with a taste of swan. Isn’t it beautiful? 😛

Santa Buddies Ad
For younger children (6 to 11 years old), a nice Christmas adventure awaits you at the Disney Santa Buddies advertisement building! You can find it on Main Street of most islands. Thanks goes to Incredible Fish for the update.

Once inside the building, go to the right side to be briefed by the white instructor dog, Santa Paws, about what to do. The goal is to get all five brown reindogs in time to deliver Santa’s presents so everyone can have a very merry Christmas season! xD

You have sixty seconds to round up all 5 dogs. To the right side of the Santa Paws is a snowy landscape, and if you explore the area, you should be able to touch 3 of the dogs. The other 2 dogs are hidden back inside the advertisement building, on the higher platforms. When the time is up and you have succeeded in your mission, you will watch a little cutscene where you get to drop gifts down the chimneys! 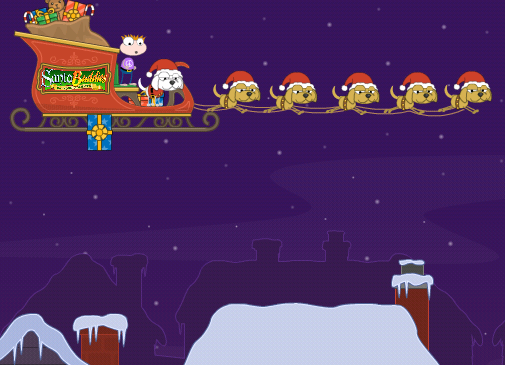 After the cutscene, you will be presented with two prizes – a green elf costume with antlers and a surprise box. The elf costume is similar to last year’s, except that there is no nose attached to the antlers and the pants are yellow.

The surprise box can be used (by clicking on the ”Use” button on its item card) to spray gift boxes all over the place, then having them magically clear up. YAY BOXES!! 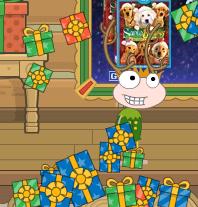 Poptropica brings out a new ad; Walt Disneys: Race To Witch Mountain. An awesome mini adventure about saving two aliens from captivity. We have even provided a video to help you.

Scary Tomato catches up with some new friends in the wickedly new Multiverse.

And we share with you some electrifying new glitches.

There’s currently a new advertisement building for all ages, which you can find on Main Street on any island! This is featuring Walt Disney’s Race to Witch Mountain, and the game in it is pretty simple. Push the boxes onto a colored button (gateway switch), and the color’s gateway will be unlocked. Collect the key inside the gateway (there are 3 of them: red, purple, blue).

Watch out for security guards – try hiding behind the barrels so they won’t see you! A tip is that if you have the jetpack from Early Poptropica or the flying power from Super Power, use it!

The most interesting thing about this advertisement is the items we we recieve. Only one of the 3 cards says that its limited time only. What does this mean? Do we get to keep the costumes? 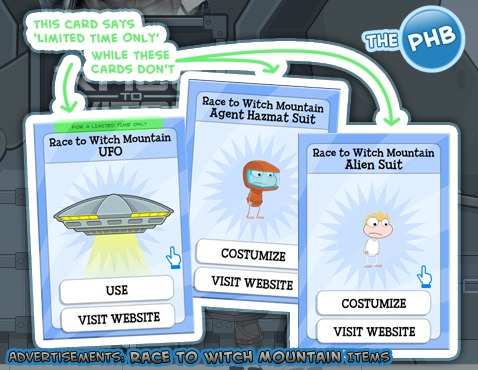 Today I met some more people from the PHF chat! Turns out that I missed Dr. Hare’s visit at ASH62, but I still got to meet many others from PHB and PHF. Most of us were doing the jumping glitch on the top floor of the crystal cavern, with Shy Turtle (AKA Anti Super Grape) being the most enthusiastic of all.

Dangerous Claw (known as Johnmoo on PHF) was wearing his Medusa hair. Jumpy Coyote, Moody Skull and I were also crazily hopping about. Tiny Star (Happyflame on the PHF chat) and Bronze Scorpion were our audience, and they supportively stood around to watch.

And according to Johnmoo on the PHF chat, Dr. Hare had been seen earlier today carrying different items such as a fishing rod, toilet plunger, flower, and some Store items, but he kept disappearing from the room.

I was also informed by Anon8348 and Lazy Feather that the caterpillar in the Shark Tooth dungeon has returned! If you’re a fan of this creepy crawlie, why not go pay a visit? 😛

Golden Eagle recently informed us of a ”Dark Purple Electrifier” glitch, which you can get using the following steps:

Note: If you change your outfit, save and come back later, it will still be there. It will disappear if you change Electrifier colors, use Phantom, etc. Golden Eagle said that she once saw dark green Electrify, but doesn’t know how to get it at the moment.

Moody Skull and Magic Storm also mentioned a ”Electrify Glitch” where the sparks do not have color!

Young Skunk told us this: “I (Young Skunk), was just having a fun Poptropica day (partying) when after a while I logged off, now later I’m back on, & I’m electrified black!”

She sent us some photos of her partying in her friends’ Multiverse rooms, in which she was wearing the light green Electrify. The photo on the right shows what happened when she logs back in – black Electrifier?! Here’s a pic:

Btw: The August 2009 issue of the PHB’s Poptropican’s 911 newsletter will be out tomorrow!