Hey Poptropicans! The Poptropica Shop is having a spring sale this weekend, and you can get 30% off any purchase of custom Poptropica t-shirts/sweatshirts by entering the code SPRING30 at checkout! (Note: these shirts currently only ship if you’re within the U.S.!)

And OMZ (which I imagine can only mean oh my Zeus), did you hear? Mythology Island has been added to the Poptropica mobile app, which is available on all iOS devices! It’s the same as the online version, so if you need a walkthrough, check out the PHB’s Mythology Island Guide! 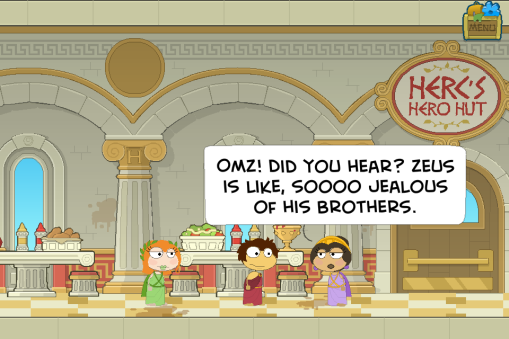 Android users, there’s some good news – according to the official Poptropica Twitter, the Poptropica mobile app will be available on Google Play around July, which is only a couple months away!

Also, there’s been a strange glitch with the inventory (thanks to KeithSammut for pointing this out!) – the “Vent Blueprint”, which belongs in the 24 Carrot items, can be found among your Shark Tooth items! What’s up with that? 😛

Anyway, don’t forget that the PHB magazine (now known as POPCORN) is looking for creative Poptropica fan stories, artwork, fashion, island ideas, and more for its next issue, which is coming June 1st! Check out the Magazines page for more details, and remember to email all entries to phbpopcorn(at)gmail.com! 🙂

The title says it all: the long awaited Mythology Island SUI is now available to everyone! Click here to get your fill of the mythological mash, and here for the PHB’s walkthrough to guide you along — you can call us the magic golden thread. 😛

For a review on all the changes from the old version of Mythology, check out BT’s post from when the Mythology SUI was released to members last week. 🙂

Enjoying the new Mythology Island? Tell us your thoughts in the comments!

“Aren’t you gonna pick it?”

“Just ignore the tree carving that says ‘Beware the Fruit’ with lightning bolts around it- some greedy kid might’ve put it there.”

“You want to live forever, don’t you? Be like one of the mighty Olympians up on Mt. Olympus, don’t you? Well then pick the golden apple, mortals, and mortals you will be no more.”

We all know where these bribes are leading us to: trouble with a divine encounter.

Just in time for its 4-year anniversary, the classic 12th island, Mythology Island, is now available for members, and it’ll release to the public next week! The Creators have uploaded a new version of the trailer video to reiterate the fact that it’s now in sound. If you need help on the island, you can find the PHB’s guide here!

Be careful, Poptropicans- as you know, you’re gonna get into a lot of trouble in this island.

Well, now that I’ve played the Mythology SUI, what do I think of it?

It was… very satisfying. I found the music to fit…usually.

For example, I’m curious as to why the music didn’t change for a moment when Zeus took the 5 sacred items from you. I’m kinda left awkwardly staring as he took them as the soothing music  played in the background. Yeah…

Anyways, about the most notable changes in gameplay…

Overall, I found the experience to be quite enjoyable- I’m pleased to see that the Zeus battle wasn’t glitchy as I feared it would be, and I’m happy with the result. As I had said when the first preview came out, I am saying hello to a new beginning.

UPDATE: The new Mythology SUI will be coming out for members tomorrow, and to all next week!

(Don’t worry, non-members — it’s not much different than the original Mythology, and you’re not missing out on much. I hope it doesn’t become a regular occurrence though. 😦 )

Hi everyone! Something’s up with the upcoming Mythology SUI, because if you change the URL of the player map, you can now find the new player map! (No one has completed it yet, though 😛 )

You can find the uncompleted Mythology SUI medallion in your medallions list as well — note that the original Mythology medallion is still there — will we be keeping both the CPI (classic pop islands) and SUI island medallions?

Lastly, they’ve uploaded the advertisement for Mythology Island saying that it’s online, although you won’t be able to view it from the in game home page.

It could be coming out tonight (the Time Tangled SUI came out at 8pm UTC), but it also could come out tomorrow. What do you think?

*stumbles out of police box* Woah. I thought I told Timmy to set a course for 2030. He is so fired…

What’s popping, Poptropicans? Blake here, in what seems to be 20th century England. Anyway, my Post Radar tells me that the Mythology Island SUI (sound-updated island) is coming soon! 😀

It may be the most popular Island the Creators have done yet, and possibly one of the more original ones (ahem, Bikers vs. Boards), and now, it’s getting the full treatment: Sound. Music. Oh, and the River Styx will be made easier too. (cue the angelic choirs!) Plus, don’t forget  the all-new Mythology desktop wallpaper and printable poster on the remade Tour page!

Also, it seems that Icarus costume was intentional after all!

After so many weeks of mystery…

HUSH, TIMMY, I HAVE NO IDEA HOW MANY DAYS IT’S BEEN!

So, that’s pretty much it for my rambling today. Stay popping, Poptropicans.