It looks like Home Island has been given a nice wintery makeover, with snow on the ground, snow in the air, and warmer attire on the townspeople. Hope you didn’t put too much money into those summer clothes – you’re going to be needing a change to stand this cold! (Nobody better make a Frozen joke. It’s been three years and I’m ready to be done with that by now. Please.) 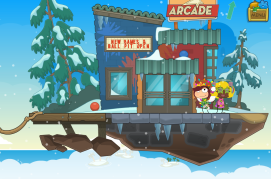 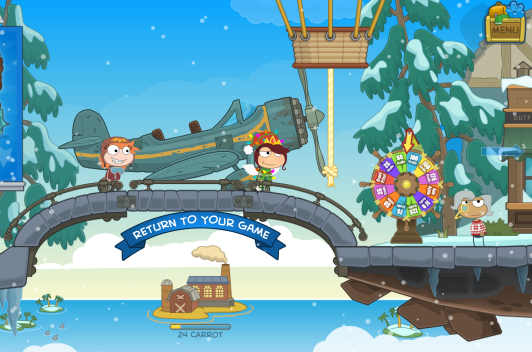 (Thanks to Pea Sea/PC for the gif, and Slanted Fish for the rest of the pics.)

They’ve also moved the winter/Christmas-themed gold cards and costumes to the front of the list for easier access to those who haven’t purchased these costumes yet. The items aren’t new, although some have been out of the store for a while, so it’s good to have them back!

In addition, there’s a new ad for LEGO Friends, also on Home Island. Just click it to get the prize – nothing too complicated. You’ll get a Sledgehammer that you can whack into the ground!

Meanwhile on social media, Poptropica’s very own Skinny Moon has found a picture of Shark Boy and even promised “more behind the scenes stuff tomorrow”! Stay tuned for that.

It’s interesting that Shark Boy is being acknowledged, considering The Mysterious Disappearance of Shark Boy that happened a couple years ago.

Found this guy hanging out at Poptropica HQ in Boston, Mass. today! More #behindthescenes stuff on the blog tomorrow… pic.twitter.com/5NNzYzfmO6

Unfortunately, I’ve got some sad news for all of you – this is my last post on the Poptropica Help Blog. Fishy and I have decided it’s for the best that this chapter of my life comes to a close.

Historically, I’ve phased in and out of fandoms quickly. This second spurt of my enjoyment of Poptropica was one of the most fun spurts I’ve ever had though. It’s not that I’ve grown up or moved past it or anything like that – my current interests include a show aimed at elementary schoolers, for crying out loud! It’s just that my interest has waned for a little bit. Until then, I’ll enjoy my other fandoms, and I plan to stick around, if you all will have me.

I’ve just started up my own all-ages personal wordpress blog over at ylimegirl.wordpress.com, so feel free to check it out if you so wish. It was fun getting to know so many of you in the community! I’ll cherish this time we got to spend together for the rest of my life. 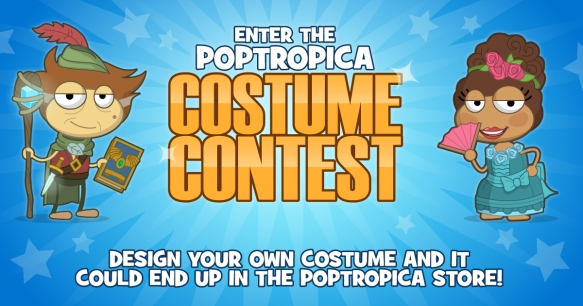 One more addition: I forgot to say 3 entries per person, max. And entries have to be original, not a mashup of Poptropica costume parts. I edited the blog post to say that! 😀

This one is quite different from the last few held – the #MyPoptropicaCostume contest asks you to design your dream costume. If it wins, you’ll get a 6 month membership and it will be made into a real Poptropica costume and sold in the store, as well as being worn by an NPC on Home Island! How cool is that?

And yes, Skinny Moon did include a meme in her post.

Of course, there are some guidelines for this contest, as listed below:

Like the last few contests, you have to submit your creations through a social media account with the tag #MyPoptropicaCostume. If you don’t have a social media account, and don’t know anyone (adult, friend, etc) who can post for you, fret not – we at the PHB would be more than happy to post it for you on our Twitter – just contact the PHB to let us know.

The contest ends on December 31st with the winner announced in January. That means we have about a month and a half to make some fabulous costumes – get drawing!

The creators leave us with two costumes created by Perfect Sky as inspiration, if needed.

Good luck to everybody! I know I’ll probably enter (if I get around to it).

Halloween is coming up this Monday, and I’m ready to dress up for a hardcore night of… playing Poptropica, probably, since I might be a little too old for trick-or-treating (by most people’s standards).

Anyways, the Creators have certainly have been getting in the spirit this month, and even more news has poured in from the floodgates! First of all, we’ve got a lovely wallpaper, perfect for screens with a 4:3 ratio! Skinny Moon claims it’s from one island and us “longtime Poptropicans” would know, but I keep staring and can’t think of any island that features scarecrows, carrots, and spaceships.

I mean, I can think of three different islands that have these traits, but not a single one. Maybe I’m just missing something, and I’m not as much of a veteran as I thought I was. I digress though. Wallpaper! 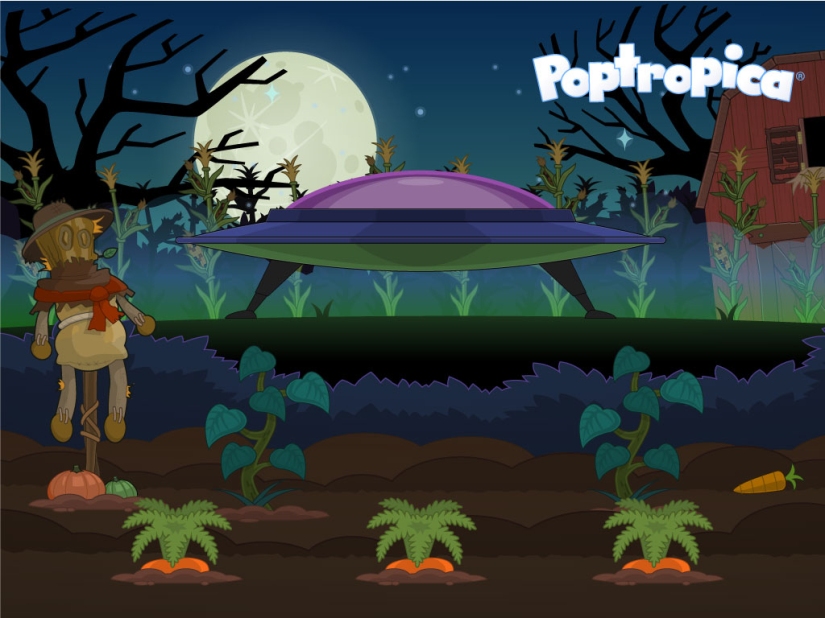 (Update: As a couple of commenters here have mentioned, this scene is from the optional video game you can play on Zomberry Island, Terror in the Garden.)

To keep up this spoopy mood, the Creators released some concept art and animations for one of the IOTM, Monster Carnival! We’ve got sketches of both the Poptropicans and monsters that made their way into the island, as well as a couple of animations.

It’s always pretty neat to see what designs creators go through before the final product. (Unless it’s my characters, in which case please don’t look into that my original designs are terrible and I want to burn them.) Be sure to check them all out!

Finally, we have Skinny Moon celebrating Black Cat Day (October 27th) with the new black cat follower. This cat can jump really high and seems far more friendly than my cats. (Mine just sleep all the way over in the corner and glance at me sometimes. I’m sure they love me though.)

If you’re a member, be sure to pick up the card from the store. If not, well … say hi to Whiskers from 24 Carrot Island I guess? Wait, Whiskers isn’t a black cat. Darn it!

Well, that’s all I’ve got for now. May your Halloween be filled with lots of candy!

Some major events happened today. First of all, the winners of the #PoptropicaArt contest were announced! To reiterate the prizes from the Poptropica Creators’ Blog:

And the winners are in first place: Maryann P., in second place: Crafty Poptropican, and in third place: our very own Slanted Fish!

Be sure to check their blog post for the Creators’ commentary! 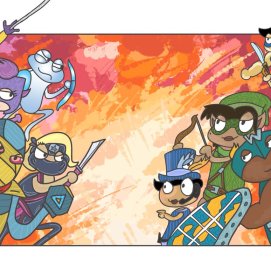 In addition, @yuneiko_, @yazz._.minne, Tiger35767, @smileyfaceorg, Shaky Skunk, @julia_henry_la, Creepy Goose, and our very own Brave Tomato all got honorable mentions! Congratulations to all the winners! 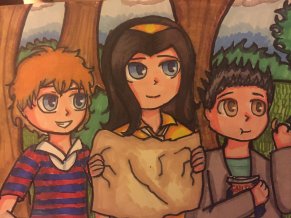 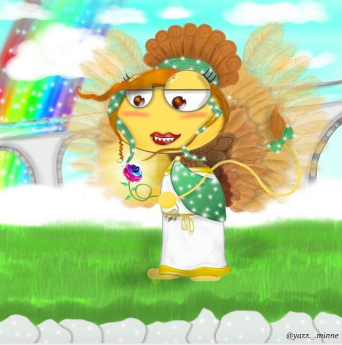 In other news, the month of October is now in full swing, so Poptropica’s begun to celebrate! The Halloween photo booth is back, along with another Photo Booth contest starting next week. Skinny Moon has also gotten into the spooky spirit, and she’s not the only one – have you seen our Poptropicans lately? 😉

She’s going to have to lay off the garlic.

In other spooky news, there appear to be some strange glitches on Home Island affecting hair color and fashion choices. No, oh wait – apparently DJ Saturday Nite and New You lady went to the hair salon together, and even Amelia’s appearance is deliberate. My bad.

Well, that certainly is a “New You”.

In addition to the aesthetic changes, some characters, specifically Amelia Earhart and the wheel-spinny-guy-dude, also have some new dialogue! Seems the creators favor the term “loot” over “prizes” now, and Amelia’s plugging the new Fall Fashion lineup. (Thanks to Happy Lobster for the images!)

Finally, the spooky Halloween-themed items of the Poptropica Store have been moved to the front of the card lineups for easy access! Check ’em out and deck out!

Whoof, this was a long update. Thanks for sticking with me!

As promised, Poptropica’s big birthday bash is under way! Talking to the Prize Wheel guy (after spinning the wheel) informs you of this news:

There are two prizes that can be obtained through the store for free, rather than any sort of balloon-hunt as in previous years. This year’s prizes are a blue balloon with a green nine on it, and a cat sitting atop a birthday cake as a hat! 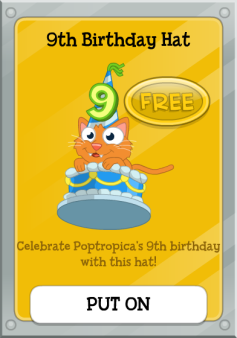 Credit to idk for the first two pictures!

Look at how happy Cuddly Eel is over these prizes! You can just see the smile on her face! I’m sure it’s there. Right Cuddly Eel? Right? …I hate it when my avatar doesn’t agree with me.

(Seriously though, this cat is adorable. I love this cat. I want to adopt this cat. Can you tell I’m a cat person?)

Get it? Cats have 9 lives? Poptropica is 9 years old? Sorry, dog people, you can’t deny that the cat wins this round.

UPDATE: In addition, Poptropica has posted photos of the Creators at the big birthday bash, with the original creator, Jeff Kinney himself, cutting the cake! 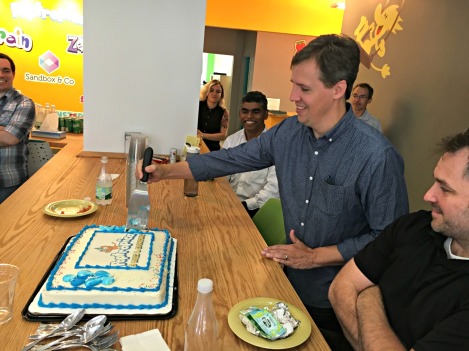 How many Creators can you recognize in the photo below?

UPDATE UPDATE: There will not be a balloon-popping event, as the Creators have since confirmed both on Twitter and in the comments below. Sorry to get your hopes up!

Thanks for the great nine years, Poptropica, even though I was only around for the last five or so. Here’s to another great year!