Just today the Creators posted about some updates coming to the Store, saying that every month items will be added, old or new. And so far, they have proven themselves…

Three items have been added to the Store on Poptropica Original, all of which are Member exclusives from old islands. These include the Berry Scary Monkey follower from Monkey Wrench Island, the Beachgoer costume from Wimpy Boardwalk Island, and the Sea Captain costume from S.O.S. Island: 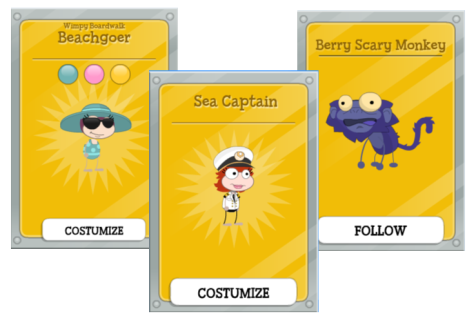 So far, I’m pretty excited about this idea. After all, we’ve all been wanting at least some update to Poptropica, and hey, Store items are a start. I especially like that fact that old items are being brought back for those who missed them.

The Creators are also asking for feedback about what you would like to see added next through their new comment system. Lucky Joker recommended some items like the Steamworks Mech Pilot costume and Vampire Count costume, and I recommended costumes from some of the earliest islands, as many of us didn’t play when the game was first created. What do you want? Leave it in their comments (and ours)!

Not only are updates being announced on the Creators’ Blog, but they are being announced on Poptropica’s Twitter (@Poptropica), too. One of the most pressing questions that has been on all of our minds for awhile now is what is going to happen to Poptropica when Flash ends in 2020, and @FordGaile finally got an answer:

We're working on making sure that Poptropica stays around long past 2020! The amazing Poptropica creators are hard at work on new updates to the technology and the game for all our loyal fans! #PoptropicaForever

It looks like the Creators are planning to transfer everything over to Poptropica Worlds or somehow avoid the Flash issue, which is very good news. Perhaps all of our progress on Poptropica won’t be lost after all!

The second most pressing question we’ve had is about what has been happening to Realms since its disappearance months ago, and this time @georgiemendes03 got an answer for us:

We're working on it! We'll let everyone know when it's available again!

This may mean that Realms had a serious bug or that some big changes are going to be made, but at least it will be back! Additionally, the Creators announced that they’re “working on a lot of new stuff” and to check the Creators’ Blog often, and the somewhat pesky ads for old islands are for the “tons of new players” coming to Poptropica.

Despite our worries about Poptropica fading out, if what the Creators said is true, it’s actually doing the opposite. Still, that begs the question: why the recent staff cuts? As Skinny Moon (@PopGirlJess) recently tweeted, the team “got drastically cut down.” So what’s really going on?

Hi! I really don’t know what’s going on now. I do know the team got drastically cut down. But there are still some originals there!

What do you think of old items coming back to the store? Any theories on what Poptropica is going to do to adapt to Flash ending in 2020? Leave your comments below!

I’m SO obsessed with the Mighty Action Force card game. I even got the rare Omegon card… dare you to challenge me 😏

To start with, Nate Greenwall, the inventor of Dr. Hare who was recently let go from Poptropica, tweeted some really cool sneak peeks of old sketches! These drawings include costumes, buildings, and diagrams of islands.

The first photo contains many of the costumes we know and love today (including Captain Crawfish’s costume itself), but the second photo is where it gets more interesting. Most of the drawings are of scenes we have already seen from Shark Tooth, but there is one piece of paper that is cut off, describing an unknown island. It appears to end with an R, and there is a sketch labeled “GHOST SHIP” that has jellyfish obstacles, requiring you to talk to ghosts to get a combination for a chest. It looks less fleshed out than the other sketches, so it’s likely that it was never planned to be released.

The items in the third photo are also interesting, especially since you can see a small portion of what looks like an early version of the Flying Squid tribe room. There are also some sketches of the cheese curd factory on Mocktropica, including an odd drawing of a machine twisting a cow to get milk.

In other news, recently on Instagram, user karin2_arts asked under one of Poptropica’s photographs (@poptropicacreators) whether there will be any more updates coming to Poptropica Original. And somewhat surprisingly, they said yes! 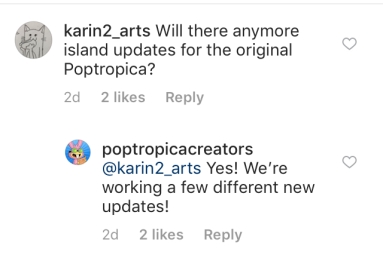 So what could these updates include? Well, I have a feeling there won’t be a new island; after all, Poptropica Worlds will likely have all of the Original’s islands eventually, so there wouldn’t really be a point. Some more plausible updates could be new costumes, updates to Home Island, or possibly even a new mini-quest if we’re being ambitious. But who knows? Maybe the Creators will surprise us again!

Speaking of Creators, the official Poptropica Twitter (@Poptropica) has unfollowed hundreds of people, narrowing it down to just 19 accounts (the PHB’s Twitter is one of the few not unfollowed). One of the people unfollowed includes Jessica, also known as Skinny Moon, the previous social media manager. She tweeted:

And they pretty much unfollowed everyone. Part of being on social media is being SOCIAL and not elitist. Follow your fans back @Poptropica. #notcool

She’s not wrong. After all, she brought the community together and made people excited for updates; Poptropica should value her opinion. Elitism creates isolation, and isolation creates unhappiness. Jessica also mentioned that this new social media direction could be because of employee changes:

I don’t know who’s running the social media, now that most of the company is gone. But it stinks seeing everything get dismantled. 😞

We’ve known that some senior Poptropica employees have recently been let go, but she says “most of the company is gone.” What does this mean for Poptropica’s future? How will updates be done in a timely manner with few employees? Right now, the future of Poptropica is looking pretty grim…

What do you think of the sketches? Or the promise of updates coming to Poptropica Original worked on by unfamiliar employees? Leave your thoughts below!

Hiya, Silver Wolf here with news about a new island on Poptropica Worlds!

Only a day ago, Brave Tomato posted a trailer for an upcoming island, Greek Sea Odyssey, and it’s already here! It came out on mobile that same day, but now it’s available on both the app and browser, so you can play at home or on the go.

Right now it’s in early access for members only, so if you don’t have a membership you’ll have to wait a little longer to play. 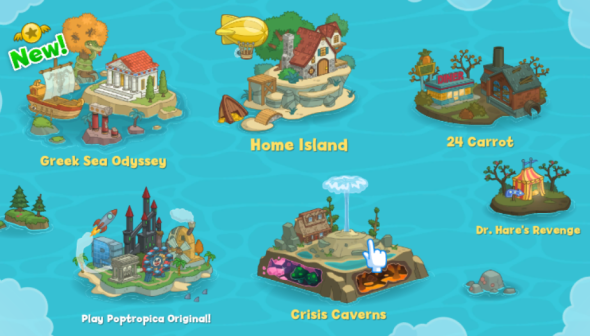 So what is Greek Sea Odyssey about? Well, when you drop off the blimp, the first person you meet is Georgios, who explains that people are trying to build a city ruled by its citizens (or a democracy, as your Poptropican points out), but Zeus, ruler of all the Greek gods, keeps interfering. That’s not that unexpected; I mean, Zeus wants to rule all of Poptropica, after all.

The island seems to be a continuation of Mythology Island on Poptropica Original, with all the gods having left Olympus except for Zeus. Athena asks for your help to overthrow him, but in order to do so, you need to — guess what — go on an odyssey across the sea and gather sacred artifacts. Will you topple the great god of Zeus, or will you fall to his wrath? And what do these sacred artifacts include?

I don’t want to go too much into detail because of spoilers, but if you really are dying to find out what happens or need help on a section of the island, you can check out our island guide. 😉

Update: There are also Greek Sea Odyssey costumes in the store, including two members only costumes and two costumes for everyone.

From left to right, we have: a generic Greek female costume, the queen Hera, a skeleton, and emo Icarus—my personal favorite character. It’s pretty cool that you can be actual Greek Sea Odyssey characters, and that there’s something for everyone!

What do you think of this island concept? Is it too similar to the classic Mythology Island or do you like the idea of a sort of sequel? And which costumes do you like? Leave your thoughts in the comments below!

First there’s EthanGamerTV, popular for his videos for Roblox and other games, who in November played Poptropica Worlds for the first time! Here’s his video:

In this video, Ethan focuses on one aspect of Worlds: playing through 24 Carrot Island. I personally thought it was really fun to watch!

Interestingly enough, he did play Poptropica Original in another video over a year ago, so some of you might remember seeing him. But StoryArc Media (Poptropica’s company) actually sponsored this video, which means he was paid for playing Poptropica Worlds.

He hasn’t made another Poptropica Original video since then, which is probably because he had other motivations besides fun, but at least the sponsorship exposes the game to another audience—and who knows, maybe he’ll even like it enough to come back to it.

Next up there’s a new video from DanAndPhilGAMES, a general gaming channel owned by Dan Howell and AmazingPhil, in which both Dan and Phil take a trip to Poptropica Original. Neither of them have played Poptropica before, but the video came about as a request from their viewers. You can check it out below:

(WARNING: In the guys’ words, this is a “15+ rated game”—or at least, their commentary makes the video such. Keep in mind that parts of their conversation are not G-rated.)

To recap the video as far as gameplay goes, Dan and Phil didn’t actually complete a full-fledged island, but they did complete the Home Island tutorial, played the Snowpocalypse mini-game, and interacted with some Poptropicans in common rooms, chatting and playing mini-games like Star Link and Hoops. All in all, it seemed like they had a fun time, and it was fun seeing their reactions!

To me, though, Dan and Phil’s video was slightly unfulfilling, as they didn’t really complete an island, but who knows what will happen next? After all, many commenters are asking for follow-up videos, like this one:

Even though I found Dan and Phil’s video to be funnier (though not for younger audiences!), Ethan’s playthrough was more fulfilling, since he did go through a full-fledged island, whereas Dan and Phil jumped from place to place and didn’t stay too long in any of them. Still, both videos were quite entertaining!

Now that you’ve read my thoughts, what did you think of the videos? Leave your comment below!