Well you heard it from the title, it’s time for me to go and disappear onto deviantArt and other stuff! Partly because of school, and drama on some chats. I may still be on the PHC, it just depends on if I feel like it or not. Don’t really want a special list of people I enjoyed talking to… Kinda lazy and it would single out people.

Another reason for me leaving would be the Daily Pop. We don’t really need to post now…. But I like coming here to see if someone has found some cool thing within the depths of Poptropica every once in a while.

Catch me on deviantArt as KittyCatDayleaf.

And I should be on the PHF…

P.S. Juyo, next time you catch me on, I have a recommendation for a new author to fullfill my awesome pawsteps.

Haha, ignore the title. I’ve been addicted to Pirates lately, but I never finished Skullduggery. xD

It’s official: The next Poptropica Island is…

Some sharp-eyed Poptropicans reported seeing the Cryptids logo in the wild a little while back. The rumors were true. You can learn more at the Cryptids Island info page.

So what’s a cryptid? Well… there’s a lot still to discover!

Well give a look there. I see a new island coming!

If you are to lazy to go and click that link for the page, here’s a little screenie I got. 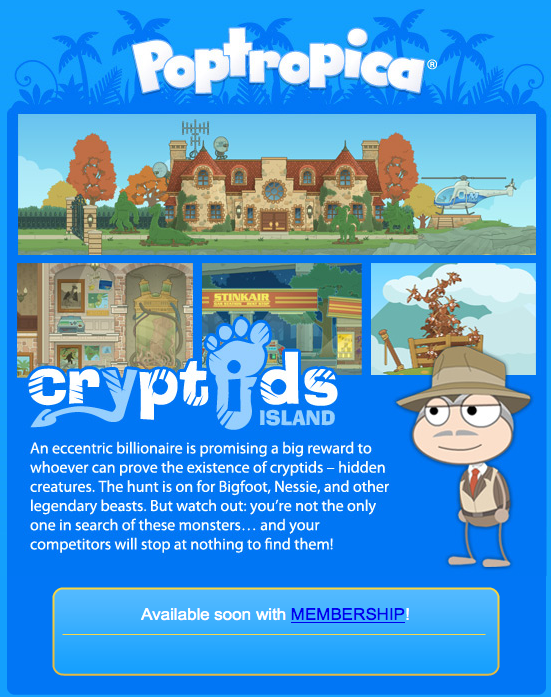 Reminds me of Counterfeit Island and a bit of Reality TV, along with some Nabooti. Think it’s worth the wait?

And BTW. If some of you were wondering why I couldn’t post lately, it’s because everyone takes the posts before I even get home from school! Luckily today was a snow day, and it is very icy outside. So I caught this one!

For realz, or just a rumor? :O

Last week we posted about a sign that read “Cryptids Island Coming Soon” that appeared for a while on the Poptropica homepage, but mysteriously disappeared. Loud Shark even took a picture for us. But now the Poptropica Creators are trying to mess with our minds!

The creators must have found our secret database. They are stating accusations! Captain Crawfish addressed this issue on the PCB today, saying:

Did you see it?

There are rumors that a new Poptropica Island was announced on the Poptropica homepage last week, only to disappear. Like some kind of mythical beast vanishing into the fog, it was there one minute, and gone the next.

Eyewitness accounts can be unreliable. Scientists have yet to prove the existence of the next Poptropica Island. The whole thing could be a hoax.

Did you see it? Was it real? Was the next Poptropica Island truly revealed?

The truth is out there.

The truth. It’s out there. WE MUST BE ONTO SOMETHING. I mean, the picture proves the rumor true, doesn’t it? What are the Creators trying to pull? Do you think they might be causing doubt among us because they’re having second thoughts about Cryptids Island, or is this all one big joke? :O

~Agent Wing and Hijuyo out!

“Generally speaking, Great Pumpkin Island is coming very soon, but every day isn’t Halloween at Poptropica HQ.” Need proof that the Creators are working on new islands? Have a look at this General Store sneak peek:

Is it just me, or are those color combo’s HORRIBLE?!

I just hate them with a passion I guess…

Now, who is ready for Great Pumpkin island? I honestly think Halloween is the best holiday, but that’s me. So I cannot wait at all, I got ants in my pants and I’m gonna dance my way TO FRANCE.

Oh by the way, did anyone else notice that the Haunted House is now 350 credits? And since I got it when it was free… I’m still skilled. 8D

Isn’t exploring islands Vlad the Viking’s job?! But no, Crawfish takes on the task now. Poor Vlad… Wonder how much he got paid.

Steamworks Island opens to everyone this week! If you’re not excited, better make sure your heart’s still beating.

During my trip to the Island, I explored all the different ways to get around. Steamworks Island has so many fun little things tucked in that it’s hard to catch them all. But this one was impossible to miss.

A giant spring! Do I even need to tell you what this does?

It bounces you a little…

And then it bounces you a lot!

After a couple of hops, you can land on this platform, throw the switch, and get back to adventuring.

…or, you can just keep bouncing away!

I made my choice, and I stand by it.

Steamworks looks pretty spiffy if you ask me… I like sparkly and bouncy things. :3