This is Mighty Gamer – coming at you with bad news, instead of the usual good news (that being a news post or a sneak peeks post). I have decided to quit blogging, and not only that, I am also leaving the community entirely. And no, this is not a prank. I really am leaving.

I’d like to thank the authors who supported my blogging. Not only the authors from this here blog, but the authors from Explore, Collect, Compete, a blog I made on the 6th of November, 2015, as well. Even to the authors – well, former authors now – of The MEGA Poptropica Blog!, which is now inactive.

Also, a huge thanks to the commenters and likers, as well. Without you guys, I wouldn’t even be here to begin with. You were the biggest supporters of all.

Oh, right. And the reason I’m leaving. Well, I have many reasons, many of which I can’t name. For the reasons I can name, however…

To explain in the most simple way I can, I lost interest in Poptropica. Period. That alone is enough for me to quit. But there’s also school, and there are real life responsibilities I must attend to.

And family. That’s where my explanation gets cut short.

I apologize for not being here very long, but I did have a ton of fun while it lasted. Thank you for inviting me, Slanted Fish. I was warmly welcomed from the beginning and everyone’s been so nice to me, but I have to go now.

For the last time, ever,

Recently on Poptropica, the anticipated Wheel of Fortune – Poptropica style – was introduced!

You can find this luck wheel (that’s what the cool kids call it, for your information) on Home Island. Really. It’s right there. As soon as you drop in. Here, take a look for yourself. This may be a tad confusing, but you don’t click the wheel itself. Instead, see that guy to the right? Talk to him to spin the wheel and see what you win! (Thanks to Brave Dolphin for her pic!) 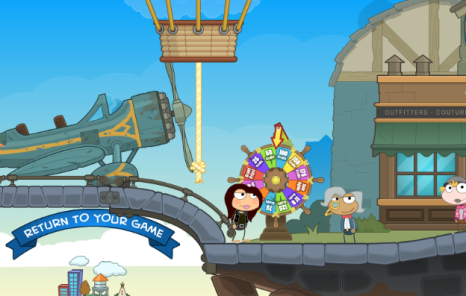 The disk of currency!

You can win a number of credits by spinning the wheel – 25, 50, 75, 100, 125, 150, or 175 at a time. If you land on ‘Grand Prize!’, you’ll win one of the many Bronze Cards Poptropica has placed in the Store! A number of these are rare item cards that are being brought back for a limited amount of time (about a month, says Poptropica), while others are Gold Cards and Store Costumes being featured.

Unfortunately, some of the older (and even free) costumes have also been removed from the Store with this update. Perhaps they weren’t popular enough?

These Bronze Cards have also increased in price, but considering all the free credits you can now get just by spinning that wheel, it seems fair enough. These Bronze Card Costumes are going for at least 200 credits, some 250, 265 or 275, and the newly-added Dr. Hare costume is a whopping 500 credits. (Thanks to Hyper Gamer for the pic below – note that it may be missing a few cards)

WimpyKidFan has also created a list of all the available wheel prizes, which you can find here.

Every day is a new chance to spin again – so be sure not to miss it!

Also on Home Island is an ad for Nine Lives, a fantasy/comedy movie coming to theaters August 5. Watch the trailer video for a Cat on the Head prize – yes, it’s what it sounds like. (Thanks to Hyper Gamer for the pics and mangle745 for the tip!) 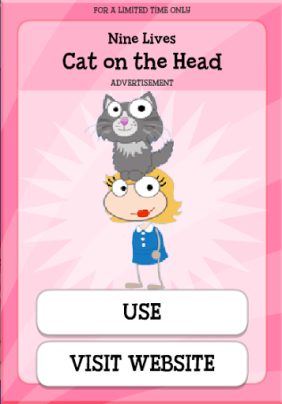 Hope you enjoyed this post, and be sure to log in every day for another chance to spin Poptropica’s Prize Wheel! What prize did you get today? Let us know in the comments!

Mighty Gamer here with another sneak peeks post. Credit goes to idk for the video and xml file, which I’ll share first, and Teen Arachnid for more mini-game sneak peeks.

Before going on about this, there’s some new information from idk that has come to light: Crisis Caverns Island is currently cancelled. Disappointing, but at least it’s the truth.

And from here on out, let’s remember to take any unofficial sneak peeks with a grain of salt – while they may be seen in the Poptropica files, they may not always become reality in the game. With that being said, let’s try to enjoy these sneak peeks!

Here’s a new Crisis Caverns video, which is of a room called “Secret Cave”, whatever that could really mean! I love the design. What do you think?

Somewhere throughout the video, you might have seen a couple stacks of stone. I thought it looked similar to the cheese in the trash can on Shrink Ray Island. I’m sure it’s only a coincidence, but it was just a little something I noticed. 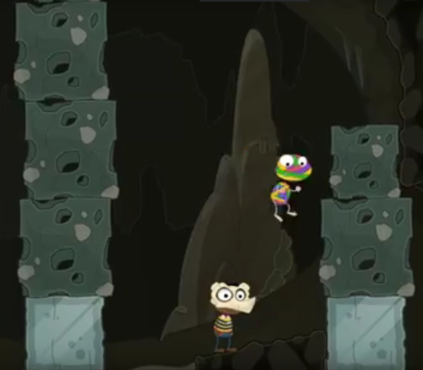 Rotten rocks (Credit goes to Brave Dolphin for the screenshot!)

You won’t believe what’s in this xml file. Yes, yes. It’s another xml file. But this one has something interesting. As you read through it, you should find this line: “Congratulations! You have completed the Crisis Caverns Episode 1 quest.” Perhaps they were making another episodic adventure, or just using that as a template, but again, since the island is cancelled (at least for now), it doesn’t matter. 😦

Here are some sneak peeks for Game Jam, an unreleased mini-game mentioned in a previous PHB post. In the game, you defend yourself by using musical instruments. And as you can see, there are 5 Poptropicans at the bottom (pictured below) those of which you control. 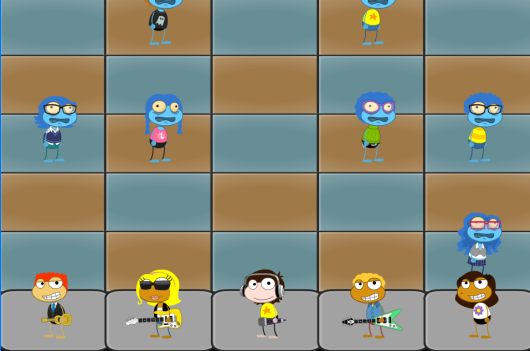 You have to click at least twice to take out the closest light blue Zomberry in a column. For the dark purple Zomberries, you have to click about five times. But if you let the zombies get to the bottom, of course, the game will end. That’s every survival game, right? Here is a popup that will appear if you lose the game:

In this mini-game that takes place on Zomberry Island, several zombies amble towards you, these are only a few of the many trying to attack you. You protect yourself with a single catapult… I guess it’s Catapult vs Zombies here, not Plants vs Zombies.

This is the catapult. There is a conveyor belt right below it, bringing things like trash, bags, sinks, rocks, etc. to your catapult. To progress in the game, you must use those items to knock out the zombies coming at you.

But there’s a catch! You can’t see the zombies as their coming, so it makes it a lot more difficult to aim for them. Once a zombie gets to you, of course, you’ll lose and have to start over. Interesting game, right?

That’s all for this post! What do you think of it? Like or dislike? Let me know in the comments below.

Hey, Poptropicans! What time is it?!

Oh, and the PHB recently reached 25 million hits! That’s two reasons to celebrate! And that means… we’re hosting a party! The party will be held at the PHC, a place for Poptropicans to talk, share Multiverse codes, and just have a good time!

If you’re not familiar with the PHC, it’s the PHB’s official chat hangout, and it stands for Poptropica Help Chat. Anyone is welcome to come and chat at any time, even when there isn’t a party going on. You can access it anytime at the link discord.me/thePHC, and we highly encourage you to make a Discord account – it’s easy and free! You might even meet a Poptropica Creator!

It’s important to note that the PHC is a kid-friendly chat, with certain guidelines in place. You can find these under the #tutorial text channel, where you’ll also find other things like formatting help, a channel guide, and more! Our party will most likely take place in the #main channel, but feel free to explore the other channels as well! Since moving away from Xat a while back, this will be our first PHC party on Discord, and we hope it’s a good one!

This year’s summer solstice is Monday, June 20, 2016 at 6:34pm EST, so if you come a little early, you can join us in counting down to the summer kickoff! From there, the festivities could go on for a few hours, so feel free to come and go as your schedule permits.

Anyway, you’re all invited, and here are the details for the event:

If you have any questions about the party, ask in the comments and we’ll answer you as best as we can! To get an idea of what to look forward to, check out our past PHB party recaps!

Well, see you there, Poptropicans! Don’t miss out on the fun. 😀

There’s a new ad in Poptropica for the upcoming Pixar movie, Finding Dory, which as you may know is a sequel to Finding Nemo! I’ve known about the movie for a while now, and I can honestly say I’ve been excited for it ever since.

You can find the ad on Home Island by running to the right until you spot it. By watching two short video clips, you’ll get two neat prizes. One is a Hank Hat – yup, that’s a squid on your head. The other prize is a Coffee Pot… and yup, that’s Dory in a coffee pot. Poptropica is realistic. Totally. I know. 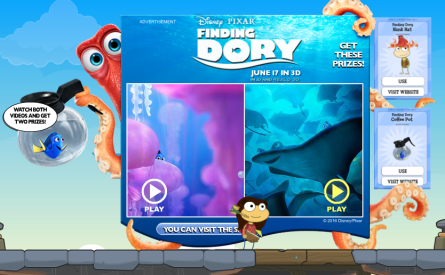 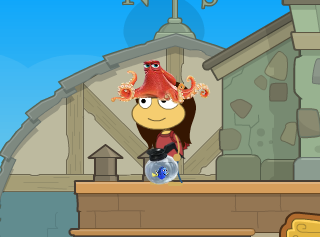 Also, another filler post has appeared on the Creator’s Blog, in which the Creators were discussing a new character for an upcoming island – but instead of giving sneak peeks, they compared characters from previous islands together, too. Most likely this is for Crisis Caverns Island, which has yet to be officially announced.

In this “sneak peek”, there’s a “crazy trapper”, “puzzled trapper”, and the “angry trapper”. Can you guess where these characters are from? (See just below this picture for answers!)

Answers: Crazy Trapper is Ed the janitor from New Jersey on Cryptids, Puzzled Trapper is Myron Van Buren from Survival, and Angry Trapper is the distressed guy in Loch Ness whose vehicle you fix, also from Cryptids.

In other news, PHB author HPuterpop recently pieced together the soundtrack for Poptropica Adventures for Nintendo DS. Here’s the video down below for those who want to take a listen. We also have a guide for the DS game if you’re interested!