Welcome to another wonderful week of ‘Poptropica Help Blog Sneak Peaks’. These posts are posted every week on Sundays. In every new post there will be stories that only we have. And only we post them. These stories are classified and are very secret.
This week’s story is ”Zoo Mascots”, its a follow up of the last story ‘Monkey Madness’, about the mysterious animals around Poptropica.

Wind was rushing past his face, chilling his spine and making his hairs stand on end. Codien was still flying in the stolen aeroplane that once belonged to the, now quite angry, Pilot of Nabooti.

Over the past hour Codien had flown past different landscapes, each flowing into the next. Large coal hills glinting with diamonds, large enough to be mountains. Gloomy trees surrounding an abandoned village. A spectacular waterfall creating a beautiful rainbow from the falling droplets of water. Codien finally decided to land his aircraft when he saw a familiar sign of a Safari Park.

He wasn’t going to land when he remembered he had seen enough animals, in one spot, to last a lifetime, and he was still trying to get the brown stains off his shirt. But he decided against it when he saw a strange man running around in circles shouting. Curious, Codien touched down the planes wheels and jumped out off his seat to see what the problem was.

When Codien got closer he relised it was Big Zeke, the guy from the brochure who owned the Safari, who was in a frenzy. Codien ran up to him and asked what on earth the problem was. Big Zeke told him about the strange animals he saw out in the wild, and when he went to take a picture he relised he left his camera behind. He had searched high and low and had not found it.

This was Codiens one chance to help this awesome Poptropican, Codien remembered he once got a camera from him. Out of his bag Codien produced a sleak digital camera. Offering to Big Zeke, he held it in awe and his eyes lit up. He span around and jumped into his truck. Codien quickly followed him and clambered into the back just in time before he sped off into the distance. Racing through the safari the passing trees were blurs. After a short trip, Zeke skidded to a halt behind some trees. In the distance Codien could here faint music. Zeke and Codien creeped closer, making there way closer to the noise. Closer, and closer they found themselves hidden behind an opening. The music was being played in the opening.

Peeping his head over Codien saw the strangest site. 4 animals were dancing, singing, crowing, and roaring to a stereo being played. Well at least codien thought they were animals. He noticed that two of them were just Poptropicans in costumes. Memorised by the groups routine, he worked out that they were rehearsing a dance piece. Before Codien could step out into the opening a tiny whisper from Zeke motioned him to come back to the truck. 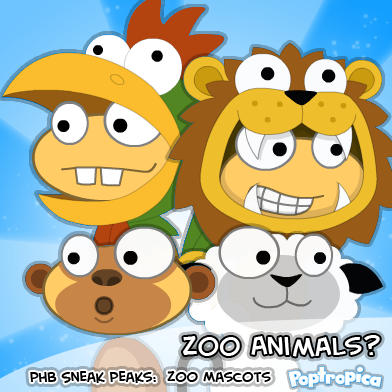 When Codien entered the truck he found Big Zeke disappointed. Asking why he looked so down even though he got the picture, he told him that the mysterious animals were just a traveling group rehearsing for their show. He reached down below his chair and pulled out a poster showing the group advertising their show. Disappointed the two drove back to the plane and Codien found himself flying in the air again.

This is a sneak peak of either some new costumes fo a new island (I don’t know what one), or an advertisement. Its most likely these are from a new island coming out because Poptropica showed us the Lion outfit, and they don’t usually show advertisement costumes. But what island?
So these are the animals i promised. You can see the Lion from the Poptropica Creators Blog sneak peak. But their is also the rooster and a sheep, plus the monkey. Silly monkey. My favourite is the lion. Also the rooster outfit reminds me of Kelloggs character rooster.
Which one is your favourite?

So that’s my Sneak Peaks this week. Next week I’ll try to have more sneak peaks on the upcoming island Astro-Knights.
See you next week.

[MESSAGE WILL BE EATEN IN 3 SECONDS…]
[!A LION, ROOSTER, MONKEY AND SHEEP ARE FIGHTING OVER THE MESSAGE!]
[THIS MIGHT TAKE A WHILE…]

Learning to write my counter thoughts. View all posts by Paul Tuohy