Ads have been getting a lot of hype recently – what with banners, cards taking you to the ads, carousel slots, and mentions on the Creator’s Blog – and the funny thing is that the actual ads themselves are just billboard ads. The two newest are for the Star Wars Rebels and the Skylanders Trap Team.

Upon logging in, you’ll obtain two cards that will take you to each ad. After watching the trailer videos for both campaigns, you’ll collect a Snap Shot Costume from the Skylanders ad, and a Stormtrooper Helmet from the Star Wars ad.

My favorite out of the two is the Stormtrooper helmet, as it has a bobblehead effect – and while the teal dragon costume does as well, I think the helmet looks cooler. 😀

I recently sent in some fan art to Thinknoodles (a popular YouTube gamer who plays Poptropica), and he gave me his “Golden Noodle Award” on his Minecraft Survival series! 😀 The idea of this is that in each episode, someone who sent in an awesome idea or cool fan art gets a sign on Thinknoodles’s tree with their name on it. Watch the video below and skip to 0:52 to see my mention. 🙂

As for the artwork, it’s a drawing of his Poptropican, Speedy Catfish (his username is thinknoodles), and I put a lot of effort into this one. I also have a new drawing software, which I think will improve the quality of my art, and thus the quality of your Poptropica Portraits. 😉 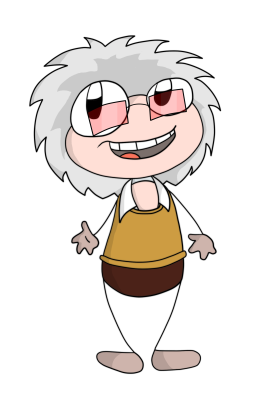 The Creators recently announced that a two week long public preview for Poptropica Land will be commencing October 16th (in 6 days!), and will end October 30th. There’s even a countdown to the big day on the front page!

During this period, everyone, including non-members, will be able to access Land. This is a big opportunity for non-members to send in their creations to the Creators. They’ll be posting their favorites to the blog as mentioned in the post. 😀

If you want to prepare for the preview, be sure to check out our Poptropica Land guide and overview here, as well as check out the recent happenings with Land – stay tuned to the PHB for more updates on this event. 😀

Poptropica recently tweeted a “behind the scenes” email from Poptropica HQ about some upcoming big launches. (Oh look, they use Gmail! 😛 ) As mentioned above, next Thurs (Oct 16) they plan to release public access to Land for a Poptropica-sponsored contest. On the same day, we’ll be getting a “New Start World” and some “polish and bug fixes” to Land as well! We’ll have to wait to see what’s new. 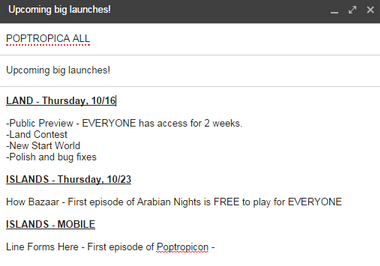 The Thursday after that (Oct 23), the first episode of Arabian Nights (How Bazaar) will be released to all! And finally, coming soon to Poptropica’s mobile app is Ep. 1 of PoptropiCon (no date mentioned).

Yet more concept art has made its way to Poptropica’s Twitter feed – this time, some beautiful black & white sketches for Mission Atlantis, Ep. 3: Out of the Blue. (Click to enlarge the pictures!) 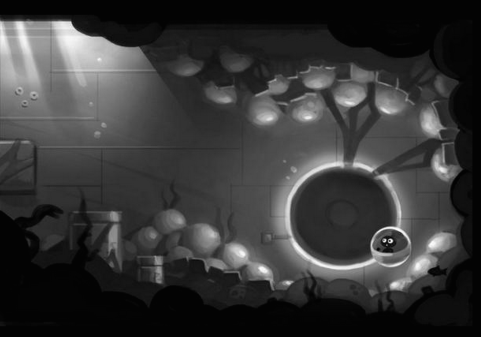 I’ve recently started a new video series on my Youtube Channel similar to Thinknoodles’ Road to Captain Thinknoodles series, entitled Poptropica Pioneers. The idea is that a few days after I release my video walkthrough for the newest release, I upload a recording of me trying to figure out the island/episode for the first time.

From the feedback I’ve been getting, people are really seeming to enjoy it, so check out the first episode below and tell me what you think. 😀 Of course you’ll be able to view new releases of walkthroughs and Poptropica Pioneers on my channel, so go subscribe to that if you’d like. 😛

If you remember a few weeks back during Poptropica’s 7th birthday, a couple of ghastly costumes popped up in the Store and then strangely disappeared. They have now returned for Halloween spirit – and if you don’t remember, they are the Egyptian Mummy and the Scarecrow from the Haunted House quest, now made into gold card items. You can get them for free in the Store!

In addition, you can get some more free Halloween-themed costume cards from the bottom half of the Store page! These aren’t new, but they’ve never been free before today either.

If you’ve been keeping up with my recent posts, then you’ll know that the Poptropican Portraits Season 1 Finale Livestream has commenced — maybe you attended. 😉 You can watch the recorded livestream below, featuring me with PHB author Blake and ATP blog owner Spotted Dragon. 😀

A couple things happened in the livestream that were note worthy — first of all, my main account (puterpop) was hacked during the livestream, and I wasn’t able to log in. It was randomized frequently while hacked, but don’t worry — I got my account back and it was fine. 😉

I also got through three (uncolored) creators, leaving Tracy West for later — but do not worry. I’ll make a speed art coloring all of them and finishing Tracy in a video on my Youtube Channel soon. 🙂

Also, hope you had fun at the PHB’s Poptropica/PHC party for our 12 million hits (if you attended) while enjoying the livestream! 😀 UPDATE: Here’s the finished product! 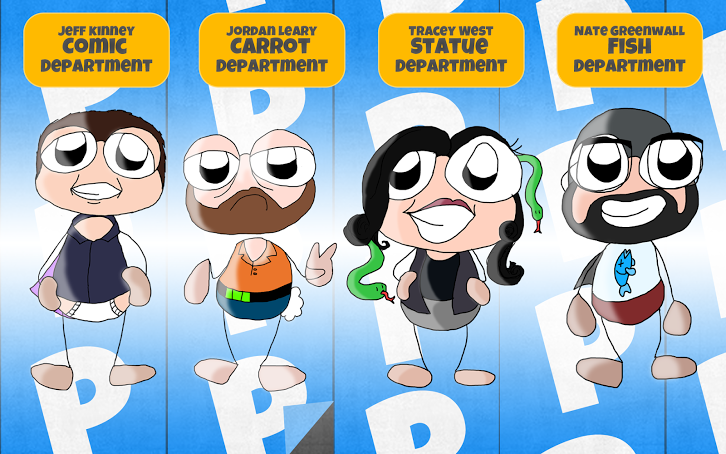 As stated recently, I’m going to be hosting a livestream as a finale for season 1 of Poptropican Portraits — and the details are decided! This event also coincides with the PHB’s Poptropica party this Saturday for our recent milestone of 12 million hits, so we hope you can make it for a couple hours of fun on the PHC, Poptropica, and Google+! 😀

The livestream and Poptropica party will be on the 14th of June (3 days from now), and will start at 4pm EST, ending at 6pm EST. The reason for the extra hour is because this livestream will be a little different than the rest — I’m going to be drawing 4 of the creators in real life as Poptropicans!

As for special guests, yes there will be two of them. Because I’m not going to be drawing Poptropicans from the community, there’s no username form, but you can vote below to choose the 4 Poptropica Creators you want to be seen drawn! You’ll find the livestream here when the time comes. 😛

Again, this will be happening along with the PHB’s Poptropica party for our dozen million hits, so come out to watch the Poptropican Portraits livestream on Google+ as well as chat with Poptropicans on the PHC and hang out in Multiverse rooms!

It’s been a long ride… is it coming to an end? Or is it just taking a break? Read on for more… Also, I have about four more portraits to do, so keep an eye out for those on the post soon. 🙂

I hope everyone is satisfied with their portrait! 😀 If you don’t see yours in there, just tell me in the comments. Rumors have been going around that I’m quitting Poptropican Portraits, and I sorta halfway am. For the summer. Season 1 of Poptropican Portraits is now complete with 100 portraits and over 100 fans. Thanks for having me draw your Poptropican — I apologize for being so lazy at times. 😉

So, what are you going to do to finish the season? Have a live stream, of course! This one will be special, however, where I try to draw multiple Creators’ real life faces in a Poptropican form! (And I wouldn’t mind if a creator or two popped up during the live stream 😛 ) The details are undecided, but lookout for info in the next couple weeks!

If you’re wondering on how to use your Portrait for a Gravatar, or save it to your computer, follow the instructions below! 😀

How to Save Your Poptropican Portrait

The Poptropican Portraits Livestream for April 2014 has commenced with Poptropicans Cuddly Lion & Pixelzy, and I’m drawing Gentle Sponge & Beefy Shell! 😀 The livestream is now over! View the archived video below:

I’m going to disappear from the community for a while, as some big tests in school are coming up in a couple weeks. During those two weeks, I won’t be active on the blog, and won’t really have time for email either — so remember that when I don’t respond.