Until we put an end to pollution, there’s no way I’m going to leave my hazmat suit. Check the Poptropica store for a new FREE Earth Day quest. Not only will you be helping to save the earth, but just for helping out, we’ll give you some free Poptropica credits! 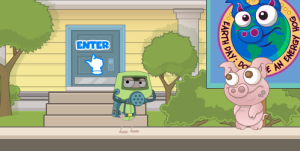 Hazmat Hermit sure is paranoid… anyway, there’s a new quest for Earth Day (which is on April 22)! You can buy it from the Poptropica Store for free (YAY! :D) And when you complete it, you’ll get 50 credits and an earth day shirt…

It’s fairly easy compared to the other ads/quests, which has disappointed other people. I honestly don’t care because, hey, credits are credits, aren’t they?  😀

So when you get in the house in the quest, you have to turn off the electronics that were turned on by “energy hogs”. I seriously thought that there were gonna be hogs chasing my poptropican, but my hopes and dreams were crushed when I found out that poptropicans were gonna be the energy hogs. 😐

There are only 3 floors, and to turn off the electronics, you just click on them. You have to keep turning them off so that your meter stays in the “Acceptable” (blue) part. Pretty easy, right?

When you’re done, you’ll get 50 credits and a cool earth day shirt. =D So, yeah… happy early earth day everyone! I’m gonna be looking for recyclables in the lunch trash cans at school with the rest of the environmental club. xD Don’t worry, we’re gonna have gloves on. 😀

Hungry for godly food? Then you’ll definitely enjoy Mythology Island! 😉 Here’s the post from the Poptropica Creators’ Blog (Thanks for the update, Bobitator!) :

A Meal Fit for a God

Today on my adventures I was especially hungry so I searched high and low for a bite to eat. Luckily for me this new island had a great eating establishment. Is that fish I see?!

You can tell it’s from Mythology Island because of the design of the restaurant is, well, Greek temple-ish. 😀 The title of the post also gives it away too. 😛

Man, after so many poptropicans gave Comic Kid hot dogs, he’s still hungry?! His poor mother… imagine how much she had to cook for him!

For Green Seal’s post about the Honey Nut Cheerios ad on Poptropica, scroll down below!

[Update] DaVinci: Everyone, there is a new PCB post. I don’t think it’s big enough to merit another PHB post, but there is some pretty sweet info in it – regarding the upcoming membership feature! For example, the Creators hint that “This is key, since we are planning on releasing some pretty sweet islands this year!”

Regarding the many concerns about Poptropica itself still being free, the PCB mentions – “Remember, even if you don’t have credits or membership, the Poptropica Islands are always 100% FREE for all to play!” So, this is ultimately awesome.

There’s a sweet new advertisement on every island on Poptropica… for EVERY AGE. :O I don’t think this has ever happened before!  This is a historical moment *tear*.  Um, anyway, it’s the Honey Nut Cheerios: Honey Defender Game Ad (Thanks Bobitator for the update!).  This advertisement doesn’t have any plot or task; there’s just a costume, a video, and a quiz game. 😀 You just go inside the huge hive and jump around.

*announcer voice* Now you can become Buzz, the honey defender!  Explore, collect, and defend the honey!

Yeah, I just took that from the video ’cause I was bored. 😀 When you click the link to the game, you are directed to the game on Funbrain.  You can also play it at: http://honeydefender.millsberry.com/, although to play the full game you have to put in a code from your cereal box.  You can play the demo version, though.  I can’t play either because I don’t have unity web player. xD

In other news, there’s another sneak peek of Reality TV Island posted in the Creators’ Blog:

Still stuck on this island, I found some people playing a game with small sliding pucks. I don’t think the mime is going to win this one.

It shows some kind of weird game that to me looks similar to pool or something… IDK.  The characters above are probably the contestants you are going against in RTV.  Some new characters are the chef, the elder woman, train/bus driver (I’m guessing), and the elder man on the right.  I think the place where the mime is is where you would be… I’m not sure, it’s just a random guess. 😀

This is all for now!  Be sure to check out the below posts:

Hey people!  Green Seal here. 😀 There’s a new post on the Poptropica Creator’s Blog, posted by Hazmat Hermit (Thanks for the update, PerfectStorm57!):

As a hermit I try to avoid meeting people but sometimes it’s hard to find a place to be alone. When I reached this island in the middle of the ocean, I figured I was the only person around for miles. I soon realized this place is full of some of the craziest people I’ve ever seen! Why would anyone run around with a jar of water on their head? It seems dangerous, especially when there’s an angry boar out to get you. I’m going to monitor the situation and see what I can find out.

0_o That boar is.. uh, creepy-looking.  This post is probably a sneak peek of Reality TV.  That jar looks about the same size as that poptropican. 0_o How can she carry that?  Well, remember in the when they said you will be competing or something like that?  This race is probably one of the things you will compete in, and I have to say that I would not like to be chased by a boar with a jar the size of me. xD

By the way, news in the Poptropica Help Forums say that the PHF has been featured in TV!  Could this be true? 0_o Check this thread for more info: http://thephf.com/forums/showthread.php?518-OMG-the-PHF-was-on-TV!!!!!!

There are two brand-new advertisements in Poptropica! =D It’s for the ages 6-11, and they’re on the Main Street on islands!  They are the:

Cloudy With A Chance of Meatballs:

Yep, there used to be another ad for this movie.  This one, however, is for the Blu-Ray, DVD, and PSP versions of the movie that are coming out on January 5th!  Here’s an image of the advertisement:

Well, first you have to enter the advertisement (obviously xD), then talk to the guy with the crazy brown hair (who is probably Flint).  He says his machine that makes food fall from the sky is broken.  OH NOEZ!  NO MOAR FOOD FALLING DOWN FROM THE SKY?!?! THIS IS A DISASTER! D:

He says the machine is located at the top of the “dangerous” ice cream mountain.  I mean, if it’s made out of ice cream, how dangerous could it be?  I could even eat it if I wanted to.

Flint tells you to go to the helicopter to bring the machine back to him.

Now jump on different items (unless you can fly) to the left until you see a helicopter in the crack of the building.  Click on it to enter it.  You have to shut down the machine by flying to the mountain!  They tell you to be cautious and watch out for falling food… hmm….I haven’t had breakfast yet…

Press the start button to begin.

Now you are at the top of the mounta- ICE CREAM!! 😀 Unfortunately, though, your poptropican cannot eat it. D: The horror!  To be on top of an ice cream mountain and not be able to eat it? THIS IS TORTURE! Well, anyway, jump on the very top and click on the machine.  Now it should be raining meatballs! :O But wait, if the machine to make food fall from the sky doesn’t work, then HOW IS THIS POSSIBLE?  Is it… could it be… magic? :O

Well, now you have to click on the pink spoon in the green ice cream.  Once you do that, you should be sliding down the ice cream mountain on a spoon.  Oh, how I wish I could just eat the whole mountain…. xD You can move your cursor to move your poptropican.  Try to dodge the falling food (even though I know you want to eat it sooo bad).  You have three chances, and you can see your number of chances by the amount of meatballs on the left.

You just press the left button on your mouse to make your poptropican jump over the food on the mountain.  Continue dodging, jumping, and sliding down the mountain until this screen pops up:

Now you win two costumes, as shown above: the Spaghetti Outfit, and the Sugar Cone Outfit! Yum.. 😀

This advertisement is for the new movie coming up on January 15th, which I want to watch! xD

Once you’re in the ad, talk to the crying poptropican with glasses (who is named Bob 😀 ).  He reveals that he’s really a government agent and tells you the kids he is babysitting accidentally downloaded secret files. :O The spies are trying to get to it! :O OH NOEZ!

Bob needs help babysitting and keeping the kids and their pet pig (aww… cute wittle piggy… :3) safe from the spies.  Now, what spy would be mean enough to harm a cute little pig? D:< After he tells you that, a screen should pop up telling you to stop the enemy spies!  You only have a short time to find the children, find the cute pig, and fix the defenses before the spies arrive.  You have to click and hold on gadgets to fill their repair gauge.  One the gauge is full, the gadget will be fixed!

Press the start button to begin.  You now have to quickly move around the house and get to all of the children and the pig and also hurry and “fix” all of the defenses (you can tell which one is a defense when it looks spy-like and the word fix should pop up when you hover your cursor over it).  This should include the TV, the plant with the flamethrower, and the lamp.

When you are done with this, this screen should pop up, telling you that you won! 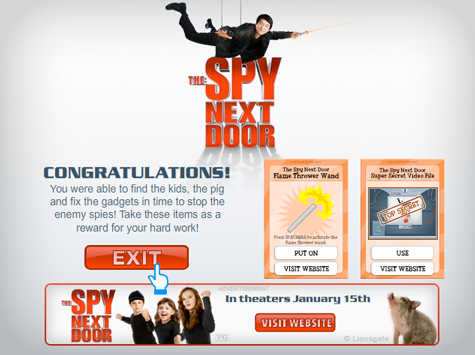 You win a Flamethrower wand, and a Super Secret Video File, which is similar to the movie room from the Monsters, Inc. ad.  The video file shows a preview of the movie, which is often used as a commercial.  The Flamethrower wand shoots out fire, and it matches the color of your electrifier, if you have it on!  😀

Enjoy your prizes, everyone!