The Flying Ace Race is underway! But one evil pilot is about to throw a monkey wrench into your plans. To beat the Red Baroness and win the race, you’ll need to build the fastest yellow blimp in Poptropica! Get ready to take flight in a compact adventure made especially for first-time players!

Note: This was the first island new players encountered on Poptropica Original from 2016 to 2019, until it was replaced by Snagglemast Island.

Welcome to Poptropica! Monkey Wrench Island is the tutorial quest that will introduce new players to Poptropica’s adventures. If you’re not a new player and you want to play this adventure, you can do so by talking to the pilot, Amelia Earhart (like the historical figure), standing by her plane on Home Island. 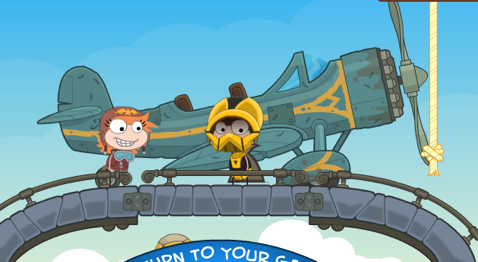 Regardless of whether you’re old or new, talk to the pilot and she’ll ask you if you are ready to start the race. Click “Yes, let’s go!” to start, or if you want, you can ask her a bit about the world of Poptropica.

The race takes place in the sky, and you and Amelia are racing together among other aircrafts. The ref will tell you the prize is a medallion. But just as you’re getting started, the Red Baroness throws a wrench at your plane, causing you to crash down. 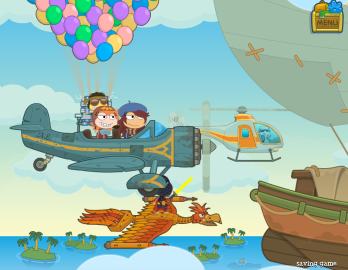 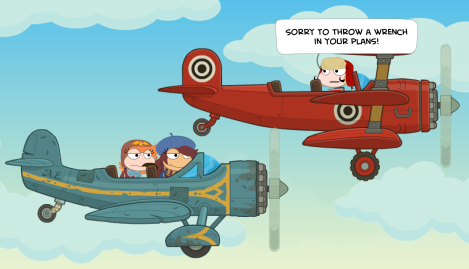 You’ll land on an island… Monkey Wrench Island! The tutorial will tell you how to move your character, and you’ll find a monkey to the right. Keep following him. 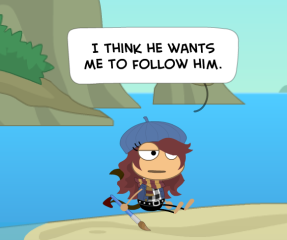 He’ll take you into a jungle, where Amelia’s plane is caught in some foliage. The tutorial will teach you how to jump, and you’ll need to jump twice on Amelia’s plane to make it fall out. Now, though, we need to find a wrench to do some repairs.

Follow the monkey back to the beach, and watch him tilt one of the platforms in the opposite direction. Do the same with the other platform, and you’ll trap the crab so he has no place to hide. The crab will drop the Wrench, and you can pick it up.

Now follow the monkey back to Amelia’s plane, and talk to Amelia. She’ll offer to show you how to use items, but if you already know how, you can skip that tutorial and go straight to your inventory to click “Use” on the wrench. 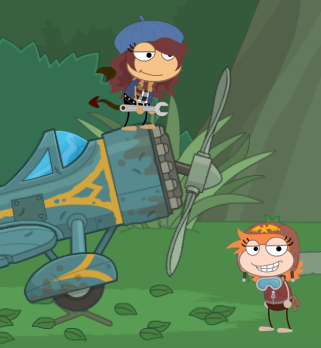 You’ll fix the plane, and you, Amelia, and the monkey will fly off. You won’t get very far, though, because the plane breaks down again.

Follow the monkey to the right, and you’ll end up at some tropical resort. The tutorial will show you how to interact with items in scenes, and you’ll ring the bell to get Crusoe to come over. As Crusoe is talking, Amelia pulls you aside and offers to show you how to change the speed of dialogue if you want. 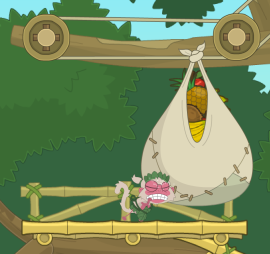 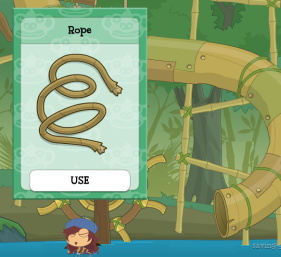 Go back to Crusoe and click on him to give him the items. He will go off to make you a better flying device. However, a while passes and he hasn’t returned, so Amelia asks you to investigate. Go up and to the right, and you’ll find Crusoe sleeping instead of working! 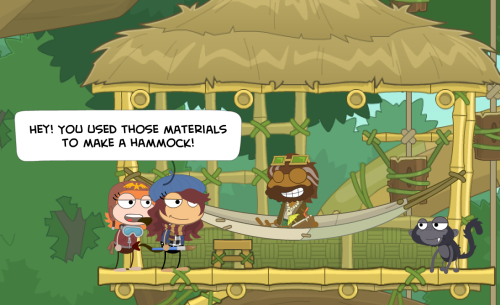 Click on him to wake him up. He will show you his plans for the flying machine and tell you to build it. 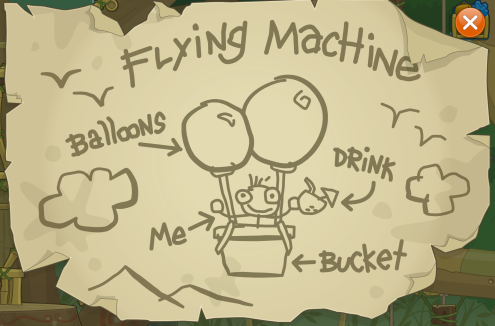 This must be some, joke right?

However, the monkey has a better idea, and you can see him excitedly waving about a stack of papers. Click on the monkey, and you’ll have his version of the flying machine – much more impressive. 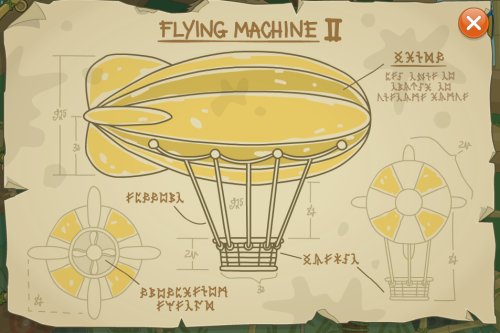 In fact, by the time you decide you’ve had a good look at his blueprints, he and his team of monkeys will have your brand new blimp ready for you to fly! Board the blimp, and you’ll be back in the race. 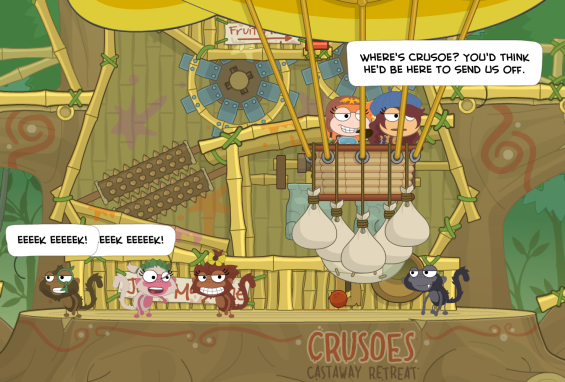 Click on the bags to lighten your load. When you only have one bag left, the Red Baroness will push you out of the blimp, but you’ll quickly fly up again. She will try and push you off the blimp. Avoid the objects she throws (or don’t – it has no effect). Amelia will tell you to drop the last bag – and there’s Crusoe, stowing away! 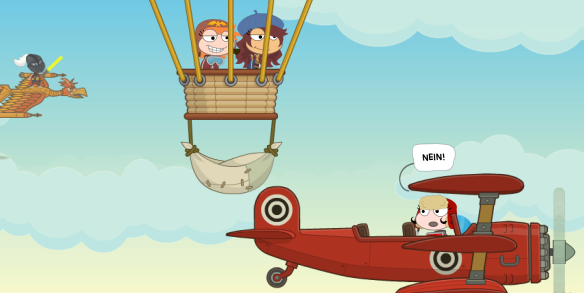 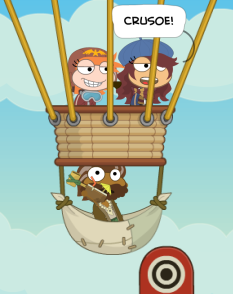 Since you can’t drop him, Amelia tells you to throw away something heavy you’re carrying. Go to your inventory and click on the wrench to throw it away. It’s still not enough.

Amelia tries to convince Crusoe to let go of his drink, but he won’t listen, so it’s up to you. Ask him, “Well…can I at least get you a refill?” to take the drink from Crusoe and throw it away, and it lands in the Red Baroness’s plane. Crusoe will jump to the plane to catch his drink, accidentally spilling some, and cause her plane to crash.

You will win the race, and the referee will award you the Island Medallion as well as 150 credits to spend in the Poptropica Store! Confetti will rain from the sky, and the islanders of Home Island—where you’ve landed—will dance. Congratulations, you’ve completed Monkey Wrench Island! 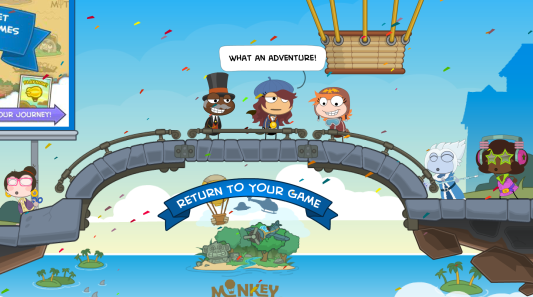 Did you know? The tutorial quest used to take place on Home Island (also formerly Hub Island) itself, and while it featured a pilot and wrench, it was a lot less interesting.

Be sure to explore the rest of Home Island while you’re here! You can alter your appearance, play with a Photo Booth, interact with other players, and more.

If this is your first time on Poptropica, hopefully the quick tutorial was helpful in getting you acquainted. Here on the Poptropica Help Blog, we have tons more Poptropica resources for you—island walkthroughs, latest news, and more—so if you’re interested in being part of the Poptropica community: welcome! 😀 We hope you like it here.