Hello, everyone! This is Gentle Dolphin here with a big Poptropica update! (In case you missed it, I’m a new staff writer on the Poptropica Help Blog.)

Ever since the first concept sketch of the new Home Island buildings back in July, we’ve been anticipating the arrival of this massive update. Now, three months later, the new Home Island is here for us to explore! Here’s a video tour from Poptropica on Facebook:

Although the old Home Island layout will be dearly missed (R.I.P. 2015–2018), this new layout is still a welcome change to Poptropica. Upon arriving, you will immediately notice a mix of old and new features.

Several features that were originally on Home Island have stayed in some form or another. The exteriors of the movie theater, the “New You” shop, and the store (now called the “Pop! Store”) have been completely redone. The interiors are still the same as before; whether or not the Creators plan to renovate the interiors is unknown.

The billboard, daily spin wheel, and photo booth are untouched except for the fact that they have all been moved to different places across the island, like the wheel being taken out of the theater to be placed outside the store (and run by Captain Jack Sparrow?). 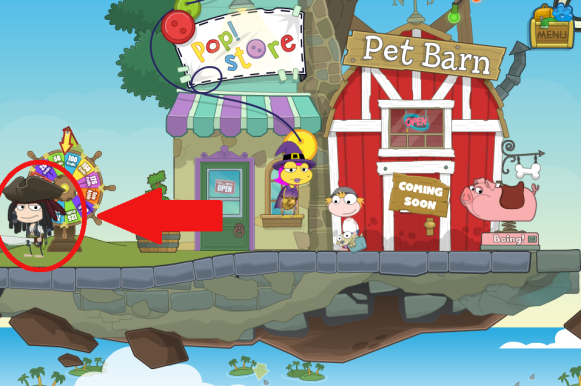 There are a few new notable features as well. First, there are some new platforms to run across and some bouncy items to jump on, like this “Pop-O-Rama” popcorn machine by the movie theater and an empty space that might be used for displaying something in the future. It doesn’t seem to be an ad space, since there’s currently a Ninjago ad on the other side of the island.

As for the bigger additions, we can’t use them just yet since they’re still being developed, but we can make some educated guesses as to what they will be used for. These new features-to-be are a pet barn, a rocket ship, and a tree house.

The pet barn, which was in the sneak peek from July, may be a place where players can adopt pets. What kinds of pets will be available and whether there will any member perks for this feature are up for speculation.

A sign at the top of the rocket ship building calls it the “Blast-Off! Arcade.” The astronaut standing by says, “The new arcade will be out of this world,” suggesting that it might be a new common room or a place for playing mini-games. 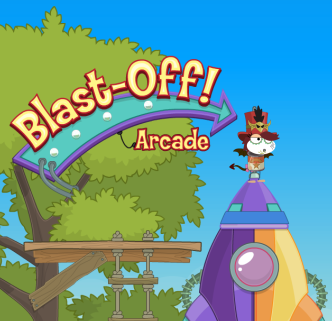 Next to the arcade-rocket, and below the portal to Realms, is a mysterious little house, with one window and a lightbulb on top. It’s not clear what it’s for, if anything, since the player’s home is likely to be elsewhere… 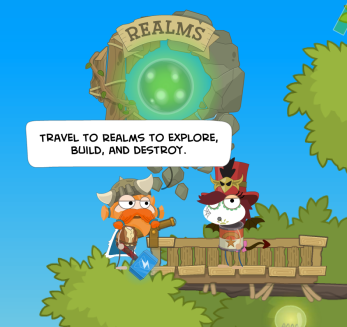 …in the tree house, where it appears that players will get a new place to live. It might not be as fancy as the tree house in Worlds, but it’s still got character. 😉 Players might be able to buy furniture and other items to furnish their homes, like we can on Worlds. Maybe pets will be able to live at home with their owners, too? It’s definitely intriguing that a feature originally from Poptropica Worlds is making its way to Poptropica Original. 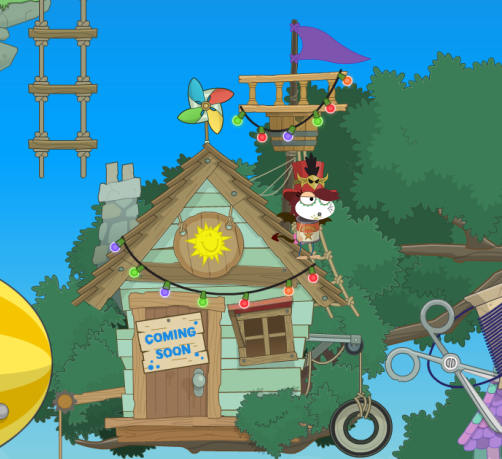 On that note, the Creators also wrote on their blog that they’ve been and still are working hard to make sure that Poptropica will stick around after Flash is no longer supported by the end of 2020. (They also mentioned it in an Instagram comment last month.) As for Poptropica Worlds, the Creators are currently working on new updates there as well. Here’s what they said:

And for those of you wondering about Worlds, don’t worry, new updates are headed there too! The Creators have been working on some updates that *have* to happen to Poptropica so we can keep it around after Flash is no longer supported, but that doesn’t mean we’ve abandoned Worlds!