Hey Poptropicans! Big news in the Poptropica sphere this week…

…if you’re a member, that is. But even if you aren’t, don’t worry — you’ll get to play this update soon. So what’s up? Well, Dr. Hare is back (kind of) in a new mini-game called Dr. Hare’s Revenge! Check out the sweet animated video promo:

In this game, which you can find on your map in Poptropica Worlds, Dr. Hare (who you may remember from 24 Carrot Island) has set a series of challenges for you: find your way around each maze full of tricks and traps, collecting all the carrots before time runs out. There are four zones of 10 levels each, which gives you plenty of gameplay and scenery to be entertained with.

Check out this full playthrough video from the PHB’s very own Brave Tomato:

Since this is currently still in beta, members who play this game during this early access period get to take a survey after completing Zone 1, in which you can give your feedback to the Poptropica Creators! They want to know what you think, so be sure to fill it out if you can! This style of gameplay is definitely following a different direction than a typical Poptropica island, yet it is a common mobile gaming trend with its simple objective and ascending level difficulties — but what do you think of it?

Also, if you’re playing this on a mobile phone or tablet, you also get to try out a whole new control scheme. With it, you can move around using an on-screen joystick and jump button. Again, the Creators want to know your thoughts on this!

The game itself is pretty exciting, but there is one thing worth pointing out: despite the name, Dr. Hare himself doesn’t make an appearance, instead letting his rabbot droids run the show! It looks like Poptropica has pulled another Dr. Hare’s Secret Lab — but at least Dr. Hare’s Revenge is quite a bit more interesting.

When you’ve completed Dr. Hare’s Revenge, you’ll win 500 coins and a cool trophy of Dr. Hare’s head for your house! Plus, you can always replay levels to beat your high scores and see where you’re at on the leaderboards.

On a comparatively less exciting note, but an exciting one all the same, there’s been an update to house decor: you can now stand on your furniture (the ones that make sense to do so, anyway — and yes, this one applies to everyone)! Jumping on beds will even make your character bounce with a satisfying springing sound. 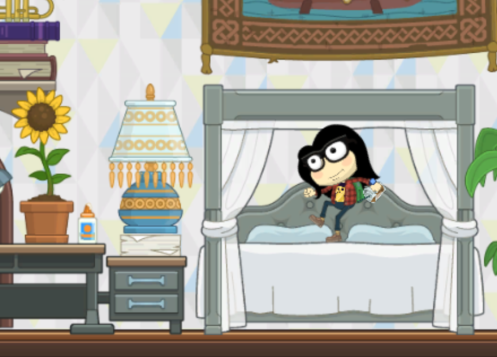 Alright, that’s all for this post! Let us know what you think of Dr. Hare’s Revenge and furniture fun in the comments below!

24 thoughts on “Dr. Hare’s Revenge, minus the Hare, plus bouncy beds”