Hiya, Silver Wolf here with some theories on what’s behind our house’s doors in Poptropica Worlds! This idea was introduced by commenter Silver Bear, who asked what’s behind the doors and how to get into them.

The doors are most likely going to be expansions of the house, but the exciting part is what type of expansions they will be.

Common Rooms? Party at your house!

One of my first theories is that we could have our very own common room! We could choose from templates of common rooms and change them whenever we want. The templates could look like regular rooms of a house, common rooms from other islands, or anything! Like regular common rooms, there could be multiple servers of the common room so it wouldn’t get too crowded. 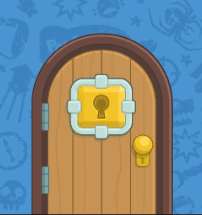 I especially think that tribe common rooms would be available since they were already separate and not tied to an island in Poptropica. Updated with the new graphics and art style, they could be really cool and could be expanded even further than before. Since they’re in our house, maybe we could even decorate them further just for us to view without affecting what others see.

A similar idea is that we could even design our own multiverse. We could decorate the room how we please and, when ready to invite over friends, click a button to create a random code so that they can join. The multiverse could end when the person who created it leaves, logs off, cancels the code, or becomes inactive for 10 minutes or so.

Trophy Rooms? Show off your stuff!

A simpler but more realistic theory is that the rooms could hold different types of items from islands. I think there will be a trophy room in particular because why else would Poptropica Worlds switch from coins and allow the trophies to go in our house? I mean, we’ll have a lot of trophies eventually.

A room could also be a gallery that holds our photos taken when we play islands, and we could choose what photos to put up and switch them around the way we want.

As for ways of opening the doors, the simple solution would be to use coins or Membership, but there are plenty of other ways we could open them too. I think that for at least one we could finish a special quest to open the door; the quest could even be specifically just for opening it. The doors may be able to be opened by completing islands in a certain time frame depending on their length and difficulty as well. For example, Skullduggery would have a longer time frame than Early Poptropica.

My last theory is that the Creators will scatter items or secrets across islands that we have to collect to open one of the doors. Maybe to open the door we have to learn some of Poptropica’s long lost secrets and history to get an ancient key.

When will these expansions come? Well, it’s taken well over a year — that we know of — for them to release Poptropica Worlds. That makes me think that these won’t come anytime soon, especially customizable multiverses. Maybe in a month they will release a regular room expansion for coins, but I think that anything more complex would take a really long time; after all, there aren’t even any social features yet, and there’s only one island so far that we can complete.

That’s all for my theories on what’s behind the doors! Feel free to add your own theories in the comments!

20 thoughts on “Popspiracy: What’s Behind Those Closed Doors?”