(Hey Poptropicans! This is a guest post written by Smart Flame, who also runs his own site, The Smart Way to Poptropica. This post is just theory and not to be taken as fact. With that said, enjoy! –🐠)

Hi guys, it’s Smart Flame. In this post, I’ll be inventing a backstory for various Poptropica villains and exploring possibilities as to how they turned evil.

Note that since some villains already have backstories explained by the game (such as Ringmaster Raven or Binary Bard), I will not be covering those. Well, let’s get right into it!

MYRON VAN BUREN (Survival Island): Myron wanted to be the greatest hunter alive, and in order to accomplish that, he needed to top his ancestors’ accomplishments by finding a new and bigger hunt: Poptropicans. He’s never lost a chance to catch his big hunt… until you came along.

BLACK WIDOW (Counterfeit Island): Even in her youth, she was the creative culprit, the elegant embezzler, the stylish stealer. When she was a child, she ruined things; she was messy and disgusting. When her parents told her to be neat, she rebelled. She used what she considered an artistic ability to vandalize places and things, which eventually led to vandalizing some of the world’s greatest art pieces.

DR. HARE (24 Carrot Island): Mad scientist Dr. Harvey Hare loved experimenting – especially on carrots. With a carrot farm just a mile away from him, his experiments never lacked his favorite ingredient – that is, until he started buying the whole harvest of carrots. To save their farms, the farmers started limiting his supply shipment. As a solution, the scientist put on a rabbit costume and starting stealing the carrots, becoming known as Dr. Hare.

CAPTAIN CRAWFISH (Skullduggery Island): When James and Samuel Ridley were boys, their father was the leader of their island at Fort Ridley. When their father died, one of them had to assume Governor, so, James, being the oldest, assumed head governor. Sam was angered by his brother’s decision, left home, and headed to the seven seas. He become a ruthless pirate known as Captain Crawfish. The one place he knew where there was treasure, enough for him to automatically assume the head governor position, was Skullduggery island, which was where he set sail for.

DIRECTOR D (Spy Island): David D. Denali was an unpopular citizen who was in the wrong place at the wrong time. Walking home from work one day, he was kidnapped by some B.A.D. agents. They convinced him to become their commercial leader; the face of their operations (the one everyone would see), and he accepted because he wanted fame. But soon he realized that he was stuck there and he’d be tortured if he left, which was why he carried out so many dastardly plans. 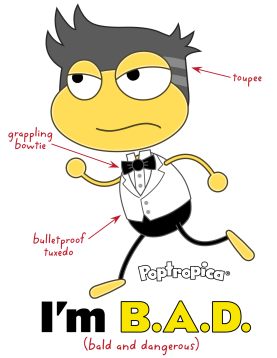 OMEGON & TESSA TURNCOAT (PoptropiCon Island): Omegon was the son of a powerful leader. His father wanted him to realize that the great power he’d have one day would also be a responsibility. But when his father saw the greed in Omegon’s eyes, he banished him from the planet. Out of anger he disobeyed his father’s greatest rule, responsibility. Meanwhile, Tessa Turncoat was a classic fan girl who fell in love with Omegon. After vowing her life to his, he messed up her mind and tortured her into doing what she did.

SHOGUN (Red Dragon Island): The evil Shogun and Basho were brothers. When Basho did exceedingly well in karate and impressed their father immensely, the Shogun-t0-be son was jealous.  He felt the only way to impress his father was to create an empire in which everyone lived in fear – and that’s what he did.

COUNT BRAM (Vampire’s Curse Island): In the early 1800s, Bram Stoker fell in love with a fair maiden. But soon he was attacked by the vampire’s curse, which ended all love he could ever have. He locked himself in a castle waiting for the day of his maiden’s return, and grew angrier with each passing day.

RED BARONESS (Monkey Wrench Island): Grace Earhart, sister of Amelia Earhart, never lived up to her sister’s fame.  When the big race came around, she knew it was her chance to ruin her sister’s fame and claim fame for herself.

40 THIEVES (Arabian Nights Island): The 39 poor people of the kingdom, a collective who survived together, had gotten a new leader: Scheherazade.  She was a good speaker who could make anyone listen to her. She created her own dynasty by turning the beggars into thieves. Their legacy was unstoppable; that is, until you came along.

FRENCHIE (Mystery Train Island): The French reporter, known as Frenchie, was amazed by everything she saw at the Paris World’s Fair. When the Chicago World’s Fair was announced, she was furious, because she thought they were trying to show up the one in Paris. Not wanting the Chicago one to be better, she tried to sabotage it.

EL MUSTACHIO GRANDE (Wild West Island): El Mustachio was the marshal until he was kicked off the job because of violence towards the citizens, but he was angry because he thought he was fired unfairly. He got on his horse, took off, and formed a gang greater than any other, seeking revenge on the Diamond Plains.

GRETCHEN GRIMLOCK (Cryptids Island): Gretchen was the daughter of an eccentric billionaire. After her father died, she got none of the money – it only went to Harold Mews.  She would’ve done anything for the money. After she heard of the million dollar reward, she felt that it was rightfully hers, and would stop at nothing to get it.

COPY CAT (Super Power Island): Copy Cat was a singer on Pop-Tube (Poptropica YouTube), but she wasn’t popular at all.  She wanted to be a big-time singer, and tried to achieve this by plagiarizing from popular songs and calling them her own.

SPEEDING SPIKE (Super Power Island): Speedy Spike was used to driving on a highway where the speed limit was 120 miles per hour. When he drove on regular highways, he went way too fast, and disregarded the police’s attempts to accost him.

SIR REBRAL (Super Power Island): Sir Rebral stole people’s identities by playing mind games on them to confuse them. When the cops figured out what he was doing, they tried to stop him, but he played mind tricks on them too. However, one cop outsmarted him, and he was arrested.

RATMAN (Super Power Island): After Ratman robbed a store, he was caught by the police.  To cover for his crimes, he blamed his friends to get out his situation, but when his friends were out of jail, he had to go into hiding because he’d betrayed them – which is how he ended up living in the sewers.

CRUSHER (Super Power Island): When Crusher and his friends visited the natural museum of endangered animals, they visited the bug section. Crusher was bored, so he decided to smash some of the bugs – which turned out to be the last of their species – and was arrested for his crime.

BETTY JETTY (Super Power Island): Betty Jetty failed her final exam at flight school, failing to get her flying license. Since she couldn’t get hired for a job without it, she printed a fake one. But when her new employers saw how badly she flew their planes, they knew she was a fraud.

MR. SILVA (Shrink Ray Island): With CJ as his student, he was always jealous of her inventions. He was so envious that he wanted to have them, and one day he decided that he had to steal it. 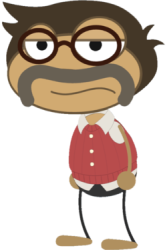 POPTROPICA ADVISORS (Mocktropica Island): After having their jobs denied as Poptropica animators, they wanted to destroy Poptropica. So they got jobs as the different advisors and tried to ruin the fun Poptropica experience.

ZEUS (Mythology Island): Zeus was an ignorant boy who always thought he was the best of his brothers. But when his father split the power over Mythology Island equally between them, he was mad. He wanted all the power he could get, and would try and get it in any way possible.

BOOTED BANDIT (Escape From Pelican Rock Island): Your Poptropican and the Booted Bandit were twins – but you were two minutes older. Your mother always favored you because you were the oldest. This made your sibling angry, and they decided to run away from home. When they had no money left, they decided to start stealing.

CONSTRUCTION CREW (Twisted Thicket): The head construction worker once ventured too far into the forest with his daughter. When they entered the Nokken territory, the hungry Nokken took his daughter away from him. The construction boss was so deeply mad and sad that he forever held a deadly grudge against the forest.

Thank you for reading, and I hoped you enjoyed these villain backstories. This was also posted on my blog, which I encourage you guys to check out [smartpoptropica.wordpress.com]. See you around!

Hope you enjoyed this guest post by Smart Flame!

The PHB welcomes guest posting from anyone in our community if you have something to share, whether it be sneak peeks, My Place in Poptropica stories, or any other ideas you might have. We also encourage sharing on our subreddit and the PHC.