So, you guys have faithfully been waiting for the next Missing Link about my giant Time Tangled theory – well, it looks like I was onto something.

If you guys have read any of the Mystery of the Map novel (which involves the origin of Poptropica), you may have realized that it basically debunked my theory – it looked like that time travel and inconsistencies have nothing to do with Poptropica’s wacky timeline. In fact, it didn’t look like there was much a timeline in the first place, what with the apparent viking island being a part of Poptropica as a whole, and not a teleported time period.

But just recently, I was looking through MotM at Octavian’s appearances, searching for an Easter egg. I found multiple Easter eggs throughout, not all about Octavian, and I’ll be posting more about those in the future, but for now, we’re talking about Octavian. 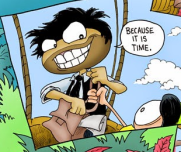 Two things to mention about the excerpts: first, Octavian saying “Because it is time.” If I have learned anything from the Flash on the CW, its to look out for double meanings in phrases. Time is mentioned indirectly multiple times throughout the book, not only by Octavian. So let’s think about the phrase as a double meaning; “Because it is time”. To preface, Mya shouts “Why are you doing this?!” while she hangs off of the balloon. So his motive for crashing the balloon is time. Now how does that fit in? Read more to find out!

Hey, what’s that in his hand? A golden watch? Where have we seen that before?

If you thought Time Tangled Island, you’d be right. Look at what happens as the balloon gets close to the portal to Poptropica:

It spins, similar to Time Tangled Island’s time machine. However, it isn’t an exact copy of the machine. It doesn’t have a cover, and doesn’t have the exact design from Time Tangled. This could completely debunk the theory, but you need to keep this in mind – the illustrator, Kory Merritt, has allegedly never even played Poptropica. He wouldn’t have known all the different design features, and a golden watch would be the easiest way to describe the time machine.

Also, you don’t see the activation knob in the appearance because, seemingly deliberately, it’s hidden by Octavian’s thumb.

So did Octavian time travel? It sure seems like it (remember the “Because it is time,” bit?). The gang meets Erik the Red on the island they land on. So once again, my theory holds strong. But that’s not the end of the story. Where did he get the time machine?

You may have noticed that along with the watch, Octavian carries a satchel throughout the book. You can easily identify it as the inventory satchel. Seriously, why else would they make it look so similar? Why would they give Octavian a satchel in the first place? It’s deliberately placed there, as well as the thumb placed where the knob would be. 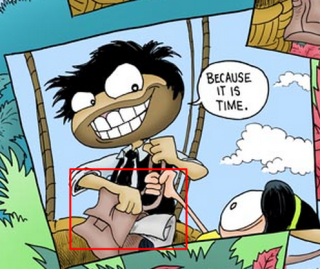 If you ever actually took a look at Octavian’s attire, you’ll notice how basic they are. It’s almost as if he’s a character just created on the start screen of Poptropica. He has a white shirt and black jacket, a black tie, and blue pants with a grey buckle. Three of the five listed there can be customized on the start, the last two very early on in the game. 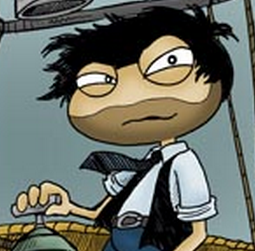 One more thing about Octavian: his experience. In order to be hired as a hot air balloon pilot, he would probably need to be qualified. Guess who automatically knows how to pilot a balloon when you start the game? 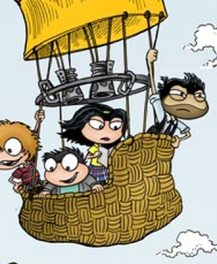 So with all of these clues, you’ve probably already pieced together my theory: Octavian is a corrupted avatar. I feel like this is going to be the story of a lost avatar trying to get home. He was much like you, hopping from island to island via time travel and his blimp, using his satchel to collect items and his wit to solve mysteries. How did he get stranded? That’s the real mystery.

We can slightly piece together some of the story; he didn’t complete many of the islands, if we judge by his appearance. The clothes worn can be found very early in the game. He has, however, already played Time Tangled and obtained the time machine.

If you’re still skeptical, I have a question: where did he get the map? If he was an avatar, it would be a given.

But there’s one more character in the novel that needs to be touched on: Embed. Come back soon for that as well!

(Also, if you’re bored and want to help us out, we have a need for pages on the wiki for the comic and graphic novel. Start by creating some pages on the islands from the comic here! 😀 From there, you can write a synopsis of what happens during the boys’ time on that specific island, and eventually creating a timeline of the comic.)