Hi guys! Slippery here. There’ve been a lot of Poptropica updates and other tidbits over Twitter and the Poptropica world lately, so here’s a recap! Let’s start with the minor ones.

Poptropica recently shared an awesome Poptropica quiz! It’s a name-all island quiz. Can you name them all? Just click this link to take the quiz. I’ve got an extra challenge for all of you: can you beat this score? 😀

Another behind-the-scenes moment was featured on Twitter – an early concept idea for the Black Flags tribe common room. Who’s a Black Flag member here? However, if you’ve ever visited the Black Flags room, you’ll recognize that this was not what they went with – it was a rejected idea. What do you think?

Here’s the latest PopStorm entitled “Helpful Hairstyles”!  Hairstyles that you can control on your own?! These are odd-looking hairstyles. How awesome is that?

Diary of a Wimpy Kid Book 9: The Long Haul ad

The 9th book of Diary of a Wimpy Kid has made it to Poptropica! As mentioned above, the title of the 9th book is The Long Haul. In this advertisement, Greg Heffley and his family visits a country fair, which Greg finds boring. When you get inside, just talk to Greg and he’ll tell you that if you can roll the pot-bellied pig, you’ll win great prizes!

The game is simple, similar to the mini-game on Great Pumpkin Island where you push the biggest pumpkin. You’ll run through moles, mud puddles, barns and crazy fair booths. Here’s a tip: Use physics! (Push the pig with great force from a far spot.) You can also watch a pig fly to the sky and crash a pie eating contest. When the pig lands on the weighing scale and breaks it, you’ll receive two prizes: a Pig Costume and a Pumpkin Bazooka Game (which leads to an external link, and awards you an in-game Pumpkin Bazooka). 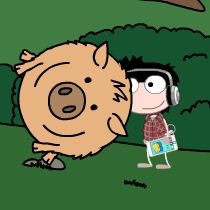 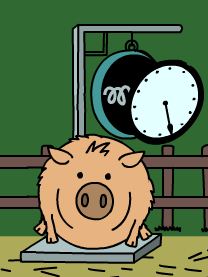 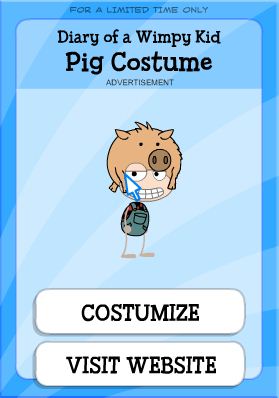 DK Publishing is holding a raffle draw for a chance to win an exclusive Poptropica Sticker book signed by Jeff Kinney! Enter now and you could be the lucky winner of this awesome treat! This tweet contains the link (note: you must be aged 13+ and live in the U.S. to enter):

One of Poptropica’s artists, Kory Merritt, was interviewed on an online magazine named “L’idea Magazine”.  He talks about his creation, Lost Side of Suburbia and of course—Poptropica! He also confirmed the Poptropica graphic novel  which is coming in 2015.  Here’s an excerpt of the interview. If you would like to know more about this interview, visit this link.

L’IDEA MAGAZINE: You are illustrating a graphic novel for a famous author. Are you still keeping the details secret or are we ready for the revelation of this mysterious author?
KORY MERRITT: Ah, that’s the Poptropica stuff. The famous author is Jeff Kinney, the Wimpy Kid himself – I think I’ve dropped that name a few times already. He created Poptropica and the characters from the Poptropica comics, along with author/editor Jess Brallier and some others. I’m presently drawing and coloring a 105-page graphic novel based on the Poptropica comic characters. It’s an original story from Jeff and Jess, and the script was written by Max Brallier, who has another illustrated series in the works. They’re really cool people. I’m lucky to be on board. I nearly geeked-out the first time I heard from Jeff, but luckily managed to keep it together (or at least that’s how I remember it).

Who will be reigned as the best of the best? The Poptropica Creators asks everyone of us to judge and vote our own Lands champion! The battle is between Zany Crown’s terrific tree house, Serious Bird’s tasty village, Silver Lightning awesome obstacle course and Fast Lizard’s haunted house! Who’s the best of the best? Vote in the poll!

“From Serious Bird, you don’t have to go far for a bite to eat in this town. Does the building on the right shake in an earthquake?”

Ladies and gentlemen, here’s what all you’ve been waiting for…

What’s coming next Thursday, 13 November (on my birthday)? PoptropiCon’s second episode, Spoiler Alert will finally be released next Thursday! What an awesome birthday gift, Creators! 😉 Do you want to know a spoiler? Guess what? SPOILER ALERT: There will be an awesome plot twist!

That’s every update on Poptropica right now, so I better go too! What do you think of the recent updates? Leave a comment below!