Hey Poptropicans! A new common room has been added to PoptropiCon Island: Facili-Tee, located right outside the convention center! Funny that they released this after the island came out, but at least we have a new common room… that hasn’t happened for the past two islands. 😛

By the way, have you found the special “7” balloon in the common rooms yet? It’s quite rare, so it may take several tries, but you’ll win a snazzy 7th birthday costume if you manage to pop it. Good news: the Creators say they’ll be turning up the frequency of the balloon’s appearance, so there’s now a better chance of finding it. 🙂 Here’s a video from HPuterpop showing what that looks like:

Poptropica’s birthday party only lasts through September, so once the month ends, so will your chances to get the special costume and free balloon in the Store – so pick those up quick! Also, you can click here to check out the recap of the PHB’s celebration of Pop’s 7th birthday. 🙂

Poptropica Music now has its own page, which you can find here. It currently advertises the Volume One music album, and while you can listen to previews of the first two tracks there, you can hear previews for all the tracks on their actual iTunes and Amazon pages.

If you like listening to Poptropica’s music, check out our Behind the Scenes page, where we’ve listed links to where you can listen to these tracks online through Poptropica’s own files! (Be sure to read the simple instructions on the page to get those links to work.)

Have you noticed that PoptropiCon’s “Mighty Action Force” parodies some of the characters in Marvel’s The Avengers? Gold Face is Iron Man, World Guy is Captain America, and Elf Archer is Hawkeye or Black Widow (not to be confused with the Black Widow of Counterfeit Island!). It checks out: 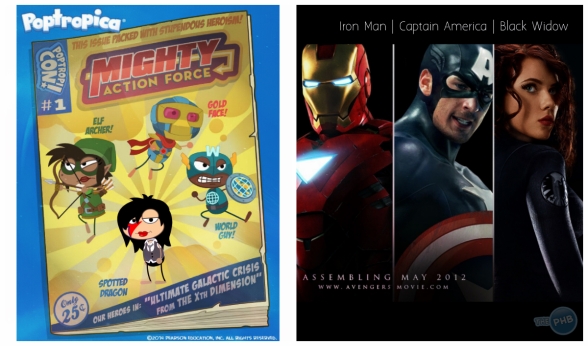 (You can see the Mighty Action Force on PoptropiCon Island billboards, and members can get the printable poster with their own character from the Store. Avengers image credit to We Live Film.)

Anyway, just a heads-up that you can find cool trivia facts like this and more on all the PHB’s island trivia pages, which are all listed under the Island Help hub page. For more PoptropiCon trivia, click here!

Among all the recent Daily Pop sneak peeks, these two in particular may be of interest – first is “Props to You”, which features the Legendary Swords villain E. Vile in his spectacular helmet (and your rocket) as decorations in the PoptropiCon convention hall, and the second is a preview of some furniture, most likely as an upcoming feature for Land (Labs). Here they are:

Props to You: May your legend never fade.

Will we ever see a return for Legendary Swords? They used to promise a battle arena at the end of the quest, but this message has inconspicuously been removed from the ending for some time now (after they failed to deliver on it for three years, I might add 😛 ). RIP. 😦

As for Land, it’s likely we’ll get to play with furniture sometime soon, to further develop the many cool houses (among other awesome things) people have been making — but for now, maybe the PHB’s Land (Labs) guide will help you members get started with this cool feature if you want some tips.

As is typical in these days, the action in Poptropica doesn’t stop — so be sure to check out the other posts on the PHB home page to catch up with all the news! Stay popping, Poptropicans. 😀