As you might have heard or seen, the new mini-game for Mystery Train Island, D.C. Diner, is out! As many PHB commenters correctly predicted, it is similar to the game Diner Dash!

To play D.C. Diner, visit the travel map and click on the starburst next to the Mystery Train logo. Or, if you log in, you can click the D.C. Diner slide in the rotating feature box to go there instantly! (Poptropica Creators’ Blog)

The visitors of the diner want a quick bite to eat before hopping on the train to Chicago. You act as the waiter/waitress and serve food and drink to them before they leave.First you have to seat them, then wait as they order.

To fill drinks, click on the machines for soda, root beer, and coffee. For food, visit the chef and pick from chicken, burger, or dessert based on what the customers ordered. When customers are done, pick up their plates and wash them. Throw unused orders in the trash bin.

There are more shifts and it gets harder each shift, like for example, a timer. When people leave, they add 20-30 seconds to the timer, depending on the shift number. Upgrades are also available each shift!

After 3 shifts, non-members won’t be able to go on, but can still play the minigame. Members can go on up until five shifts. There are also prizes to be had in this all-new minigame, which I’m sure you’ve all been waiting for!

There are VIPs that come into your diner that you have to serve, but you don’t know it yet. Whenever they leave, you get an item, and at the end of each shift, you find out who they are. Five prizes are to be had in this game!

Edison Light Bulb (non-members and members): When Thomas Edison comes into your diner, you get this handheld item that lights up when you press spacebar!

Mark Twain Haircut (non-members and members): When Mark Twain comes into your diner, he leaves you with his snazzy haircut that you can wear! Mustache not included. 😦 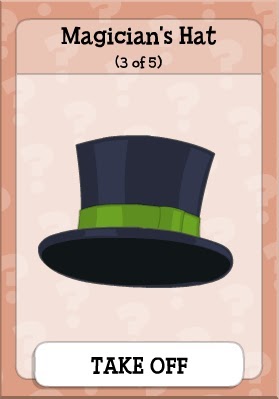 Magician’s Hat (non-members and members): When Harry Houdini comes into your diner, he leaves with you his magic hat! This magic hat, when you wear it and press spacebar, bubbles appear and a cute rabbit pops up! 🙂 Sometimes flowers pop up too, but it’s not as cute as the rabbit. 😛

Eiffel Tower Hat (members): When Gustav Eiffel stops by your diner, he gives you an Eiffel Tower hat, a hat that will surely make you a fashion “attraction”! 😀 Get it? Oh never mind. 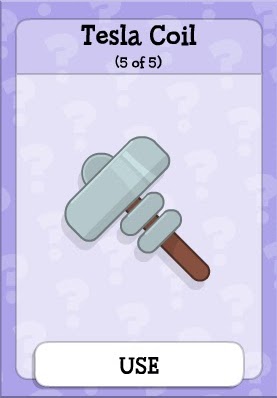 Tesla Coil (members): In my opinion, this is the best prize :P. When Nikola Tesla stops by, he leaves you with this handheld Tesla Coil. When you wear it and press spacebar, it electrifies you in little lightning bolts and emits a flash of light! 😀

. The first three prizes are available for non-members.If you have any tips for the game,  just leave a comment! Credit to Striped Grape for all the item cards! (You’ve been credited a lot now, huh? 😀 )

In other news, Plague and other PHB readers have found out about country flags and friend buttons in Poptropica common and Multiverse rooms! Seems like now we can add friends on Poptropica! 🙂

EDIT: PHC people have noticed that the flags and friend button started working last night, but got removed. But stay tuned! It might come back! 😀

Also, thanks to Mstorm/Mbones/Madrigal, we have info on the newest ad to make its way into Poptropica: the Adventure Time video ad! all you have to do is watch the video and get a Jake follower at the end! So far, it’s available on Early Poptropica. Try finding more islands it’s on!

One last thing: Have you checked out the latest Daily Pop sneak peek? It hints about costume closets! Do you think it will be an addition to the Poptropica world? Would this be a great addition? Leave your opinion in the comments! as for me, I’m out. Peace! 😀 Phew long post 😛

*dashes off to DC Diner*

I'm (almost) 16, and have been to the US Capital, Washington DC for a school trip! View all posts by Shaggy Tornado