After many weeks those Pirates that Codien saw have landed. They have crashed on a giant pointy rock, and are roaming Poptropica right now. 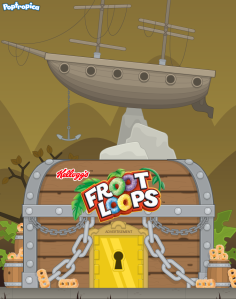 Yesterday, PCB announced that they had released a Pirate Adventure Advertisement, Just for 6 – 8. Just for 6-8!Doesn’t Poptropica know that there are people older then 8 that are playing.  So the only way to do the advertisement (If your Poptropican is older then 8) is to make a new player , and set the age betwen 6-8.

The new advertisement, based around Pirates, is advertising Froot Loops newest fruity treasure, ‘Frooty Golden Bars!’ The Froot Loop Treasure Chest Building can be found on Spy Island, 24 Carrot island, and Early Poptropica Island , and can only be accessed via a golden key.
This golden key has been broken up and given out to 3 Pirates. These Pirates are hidden around Poptropica and will only give you the key after you complete a game.
The 3 games are ‘Rebuild the Map’, ‘Pirate Labyrinth’, and ‘Pirate Target Practice’. Each one is easy yet challenging.

After all three pieces of the key are handed to you, you will then get access to the Froot Loop Building. Inside is Toucan Sam and his gang, all the games you played to get the key , a advertisement movie about the froot loop gang finding the golden bars, and a special prize thats goldeny. 😀

NOTE:To do the advertisement or find the pirates your Poptropican must be between the ages of 6 – 8. Which means if you seem to not be able to find the pirates then its because your age is to high. Create a new player with the right age and do the mission.

The Pirate locations are:

This pirate can be found on the roof of the Headquaters in Spy Island.
To win a piece of the key “ye must prove your worth at the target range” in the game Pirate Target Practice’. You use your mouse to control the cannon, you can hold down to extend how far the cannon fires.
Your aim is to get all the Froot Loops, PLUS the new Golden Bar,  and get as many points as possible. Remember
shooting the images of Black Beak will cause you to loose 25 points.

This pirate can be found on the roof of the Pop Art Museum building which can be accessed via the blimp rope in Early Poptropica Island.
To win the piece of key “ye must put back together thee map” in the game ‘Rebuild the Map’.
Your aim is to put the map back together like a puzzle.

This pirate can be found on the roof of ‘Charlies’s Surplus Co.’ building which can be accessed via the gas pumps in 24 Carrot Island.
To win the piece of key “ye must finish thee maze in time” in the game ‘Pirate Labyrinth’. You use your mouse to move the golden bar piece around.
Your aim is to reach the end in time. You can extend the time by getting froot loops. Remember hitting the images of Black Beak will take off 5 seconds.

Learning to write my counter thoughts. View all posts by Codien