Hey everyone, after a (not so short) hiatus, I finally have finals, tests, projects, etc. out of the way and can be active in the community again!

As previewed by HP in a post earlier this week (along with many other awesome things – so check it out if you haven’t), the new Fishing Suit has been (officially) released for Survival – Episode 2. It is currently free in the Store for everyone, so make sure to go claim yours! (The Fishing Suit can also be found on a tree trunk in Episode 2.) 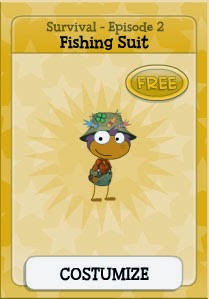 As always, there have been some interesting new Daily Pops. Sometimes these Daily Pops can give away a lot about upcoming islands. They helped us figure out that  “Mall” (Night Watch), “Movie” (Back Lot), “Monster” (Monster Carnival), and “Winter” (Survival) islands were all being prepared for release, and now it appears that the next island will have a city theme to it!

As you can see, the Portable Toilets, Pizza Pocket Truck, and vending machines, along with all the background imagery gives away that the creators are working on a new city themed project! What city, you may ask? I predict it will be San Francisco, or a city based on San Francisco. The second image gives it all away. In the background, behind the pizza truck we see a bay with a bridge over it. This bridge might just be San Francisco’s Golden Gate Bridge!

So what do you think? Are you excited for a new San Francisco-based island? What do you think the plot could be about? Share your ideas in the usual place below!