A shadow is creeping across the frontier, and its name is El Mustachio Grande. He’s the meanest, nastiest, outlaw in the land, and he’s terrorizing the good folks of Wild West Island. With your trusty horse by your side, only you stand between the Mustachio gang and total anarchy. Can you bring Mustachio to justice, once and for all?

For walkthroughs on Wild West Island, scroll down. 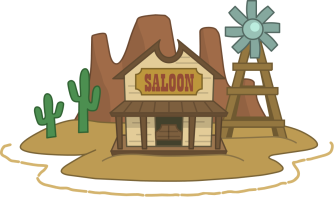 Go to Wild West Island if you’re not there yet. Go right until you see a cowboy trying to trade your future horsey companion, Elmer. Anyway, talk to the cowboy and try to tame the horse. Try to keep your cursor over the white one, and once Elmer is tamed, he’s all yours. You’ll also get a little Horse Whistle you can use if you and Elmer get separated.

Talk to the lady on the horse, and she’ll give you a Letter to Marshal, to be delivered to Marshal Taylor at the Diamond Plains.

Now you and Elmer can leave town. Once you leave, pull down your map on the top right hand corner to see Diamond Plains. Go there.

Go right, to the Saloon, and talk to the guys who are spitting gum. Join them and play. Aim your arrow and click to spit your gum into the pot when your aim is perfect. The one who gets the most gum in wins.

When you win (keep trying if you don’t win!), you will find out that the Marshal is the snoring guy towards the end of the shop. You will go and tell him you have a letter for him, but you’ll have to read it. He won’t help, so you’ll be the new Marshal. He’ll give you his Marshal’s Badge.

Put it on to show everyone who’s boss. You can leave Diamond Plains now.

Go back to Dusty Gulch, and get your picture taken. You have to hold the camera on you while it develops, and when it’s done, you’ll get your own Portrait.

Go back to Diamond Plains, and enter the Marshal Building. It looks like this:

In case you were wondering what the Members-only outfit looks like, there it is in the above picture. Anyway, go inside. Use your portrait, and since you are officially the new Marshal, you get the Pea Shooter! Do you realize that you can now shoot peas?

Anyway, just as you get the Pea Shooter, the ground will begin to shake. El Mustachio’s Gang is rescuing the jailed person! They will take off, but you and Elmer have to help! Follow the Mustachio horses, until they go into the train entrance.

Then you’ll say they got away. Now, find the star in Dos Cactos, and enter from the shooting side.

Once in there, enter the shooting contest by talking to the man by the booth. Aim about one centimeter above your object, then shoot, but be faster than your opponent. To reload, click the “Reload” button at the top.

You will have to play against five opponents, and if you beat them all, the last opponent – Miss Annie Oakley – will be impressed and give you your own Spud Gun. 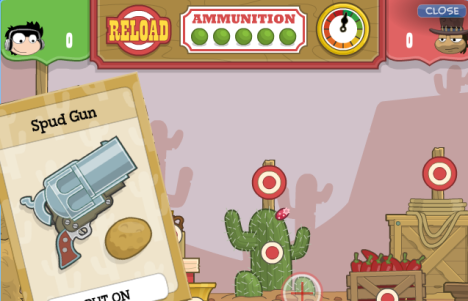 Now, go up the little hill to the casino. Go inside, and go to the top floor. Talk to the guy with cards on his hat. You’re gonna play a game of Slap Jack! What you have to do is put a card in the centre when it’s your turn, and when you see a Jack in the center, you slap it! But here’s the catch: the opponents move the Jack, so you have to be sure it’s properly placed before slapping it. Otherwise, you lose a card.

When you have all the cards, you win a Map to Gold.

You’re done with the casino, but if you go to the right, you’ll find a boy with a big head. He says he needs a blue tulip to cure him – you’ll get that later.

For now, go to Rock Ridge. Talk to the cowgirl with orange hair. She needs her cattle back, and after talking to you, she’ll give you a Lasso.

Go find that cow! Activate your Lasso by pressing space bar. Follow the little trail of hoofprints, and go north a little bit.

You’ll find the little cow. When your Lasso is pointing straight her, use your space bar again. The cow will resist, but don’t force her yet. But after a little while, she’ll know who’s boss, and she’ll follow you. Lead her to the ranch that looks like this:

After you’ve led her there, go back to Rock Ridge. Talk to the cowgirl, and you’ll get an Old Saddle.

The cowgirl will also say she could use your help wrangling five of her cattle that have escaped – this part is optional, but if you leave town and help her by lassoing five more cows, she’ll reward you with the Rattlesnake Wrangler costume. Again, it’s not necessary, but you get a cool costume for doing it!

Also, walk right of the cowgirl, and R.J. Earl will give someone a bad potion that will turn them invisible.

Moving on, head on over to Dusty Gulch and talk to the trader at the trading post, trading your Old Saddle away for a Gold Pan. The pan’s not gold; it’s for panning gold.

Now, go to this location on your Map:

Once you get there, examine it to start panning for gold. Click on a sparkling spot to pan, then shake off the dirt to see if you’ve found any gold.

If you found the gold, it should look like this:

Yay! A Gold Nugget! You can get something for that over in Rock Ridge.

Talk to R.J. Earl (at Rock Ridge) and use your Gold Nugget. He’ll give you some of everything: a fine selection of R.J. Earl’s Tonics!

Go back to Dusty Gulch, and this time, trade your pan for the Oil Can.

Now go to Diamond Plains. Find this entrance, and go inside.

Inside, you will have to drop some red platforms (click the silver knobs) and push some boxes in order to reach the top. Watch out for the pale brown wood, which falls if you step on it.

At the top, you will see the back of the clock, with all its gears and cogs. 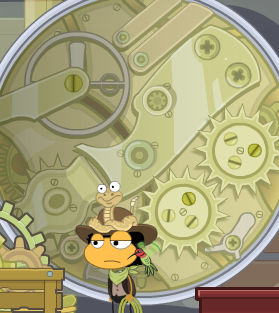 Only it’s gonna look really dirty and rusty. Click on it, and now you’ll need to oil just the eight gears that connect from either side of the two important big gears. Use the oil on them until they let off a shine, being careful to add just enough so you don’t run out of oil. If you’re having trouble oiling a specific gear, click and hold a bit to the right of the gear you want to oil.

Now click on the button in the lower-right to turn the gears, and the clock will be fixed.

Leave that room, and if you talk to the worker, you’ll find that the train is pulling up! Ride the train to Rock Ridge, and you’ll have to stop a train robbery on the way. The Mustachio gang is at it again!

Use your Spud Gun, and shoot at them! With Concentration Carbohydrate, they’ll seem to slow down, but you only have a limited supply. You must shoot each person once. Reload whenever possible.

You will arrive in Rock Ridge. Find the canary (the yellow bird), who’s resting on a ledge just next to the train station, and shoot at it. Don’t worry, it’ll only make him drop a Canary Key. 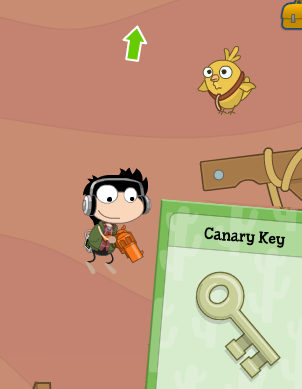 Next, go left to the door with the lock. Use the key to go inside. Inside the mine, go right. Rocks will fall.

Go right and hop onto the mining cart. This next part is similar to Nabooti Island, except instead of ducking and jumping, you have to shoot at the targets to switch tracks if necessary – otherwise, you might be led off track and fall off!

Your potato ammunition is unlimited, so fire at will! You can even knock down the flying bats, and you’ll pass about ten track-switchers before eventually coming to a stop.

Find the Blue Tulip and go up (why is there a cow just sitting there?).

Once you go up, go right. A guy will be crying because Mustachio and his gang have wreaked havoc on his bank. Above the crying dude’s head, there is a piece of paper. Grab it and you’ll have half the Map to Hideout.

Go to Dos Cactos (you can take the train), and give the Tulip to the kid with the giant head. His head will shrink to normal and he will give you the other half of the Map to Hideout.

Are you ready for the battle with Mustachio? Well, this is it! Ride to the star in the lower-left corner:

Use the Transparency Tonic to help you sneak past, and go inside their cabin for the final shootout. You will have to get rid of everyone except El Mustachio Grande. Avoid getting shot!

Then El Mustachio will take off – so take off after him! Follow Mustachio, and then lasso him and take him to Diamond Plains. 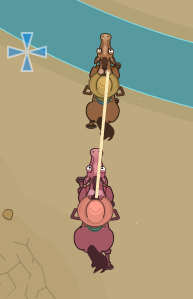 El Mustachio Grande will be sent to jail, and you’ll get your Island Medallion and credits to spend at the Store! Congratulations, cowboy (or cowgirl), you’ve finished Wild West Island! 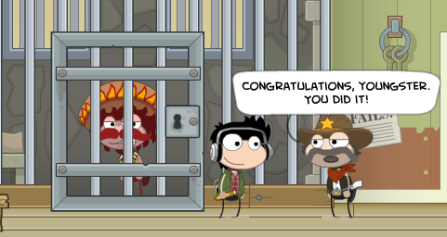 Time for some horseplay.

We do need some stinking badges.

I could shoot the shell off a snail at 50 paces.