In the dead of night, a caravan rumbles into town. The traveling carnival has returned! But this is no day at the park. Behind the lights and the laughter, the carnival harbors a dark secret. Buy a ticket if you dare, but beware — once you enter, you may never be able to escape the Monster Carnival!

For walkthroughs on Monster Carnival Island, scroll down.

Welcome to Monster Carnival Island! Once you arrive, go right and talk to the guy who will introduce himself as Edgar, a carnie trainee. He says he doesn’t think the carnival will be ready in time! Follow him through to the next area labeled ‘Carnival’.

Talk to the guy in front of the Ferris wheel, who will tell you that the lever is broken.

When you’re done talking to him, go right to the next area, where you’ll find a big Poptropican’s head, as well as the Lever, which you should pick up.

Now go left and return to the mustached guy. Give him the brand new lever. 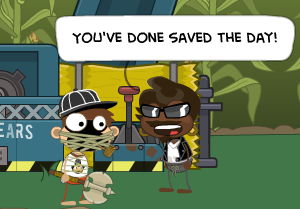 Also, talk to the lady by the fried dough stand, and she will hand you a Sugar Formula she needs you to help her make. Head back to Main Street and go inside the pharmacy labeled ‘Apothecary’. The apothecary up front (Dr. Dan) will give you a sheet for a Salt Formula you need to make for him (sodium chloride, also known as table salt). Here’s a chart to help you: 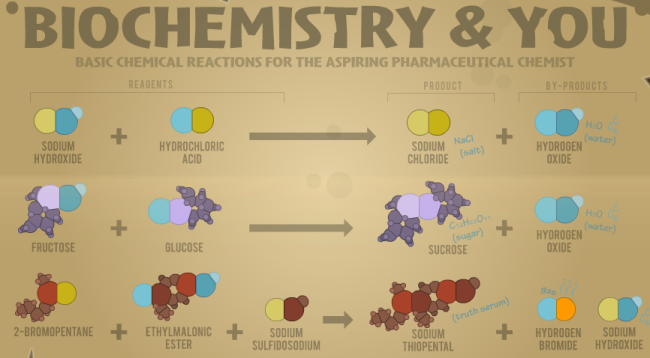 To make sodium chloride (table salt), mix sodium hydroxide and hydrochloric acid. The bottles are located on the left side of the machine. When you click on the bottles, your character puts them in the machine. Match the light blue to the dark blue, and light yellow to the dark yellow. Blow the yellow and blue compounds apart with the blower.

Once you finish, you’ll have the Salt. Go talk to the apothecary up front and give him the salt. He’ll say you can use the lab to get the powdered sugar. Go back up and grab the two bottles to the right on the lab (Fructose and Glucose). 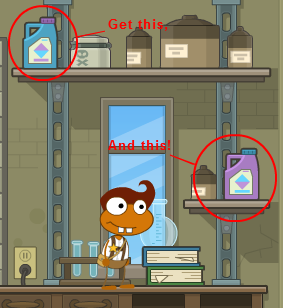 Now do the same as before. You have to make sucrose, so separate it and put it together, like so: 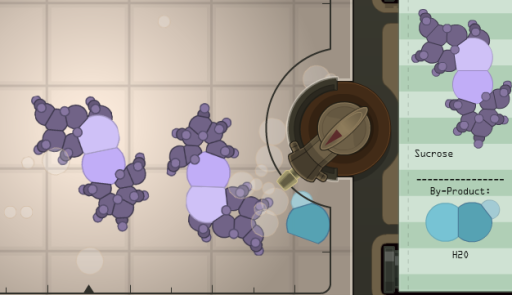 Once you have the Sugar (sucrose), go back to the lady at the fried dough carnival booth, and give her the sugar. She’ll thank you and give you some Fried Dough.

Now it’s time to get the hose! Go back left to Honest Gabe’s Auto Repair, and tell the worker you need a Radiator Hose (not the other options!). Pick up the Hose from the top of the shelf and bring it to the guy at the duck game carnival booth. The hose water will fill up the pool. Edgar will come and say that the carnival is now ready to open!

It’ll be dusk/late afternoon by now. Go to the game booth where you throw darts at the balloons and pick up the Blunted Dart. Now, run to Honest Gabe’s Auto Repair, go left, and sharpen the dart on the machine to get a Sharpened Dart. 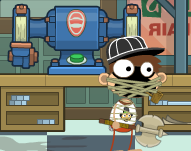 Now return to the carnival and play the Pop the Balloon game with your dart, and this time you should be successful. Not wanting to give away a teddy bear, the boothkeeper will award you a Souvenir Cup instead! (BEST. PRIZE. EVER.) 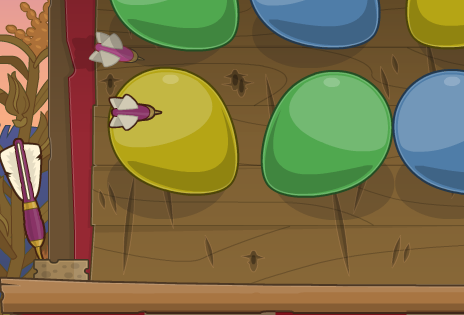 Next, hop up and let the guy with the scale guess your weight. After he guesses correctly (and gets no prize), go back to the Apothecary pharmacy. You want something heavy, but you don’t him to know you’re fooling him. Talk to the apothecary, then click on the little orange box as shown:

Now, go back to the weight guesser and let him guess your weight again. When you outsmart him, he’ll give you a Super Bouncy Ball. (Warning: If you encounter a glitch here, log out and back in.)

After you get the bouncy ball, go right to the next area, and play the Test Your Strength game. Use the bouncy ball to win – it bounces off the ball, and you’ll win a Hammer! 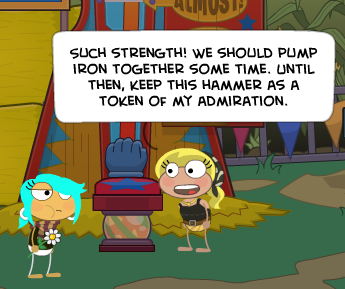 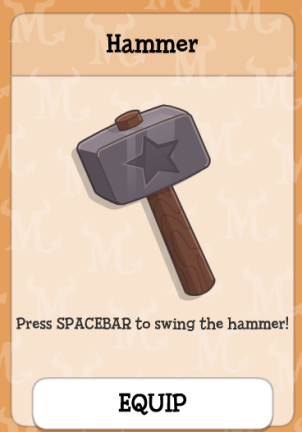 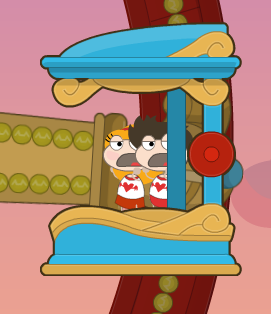 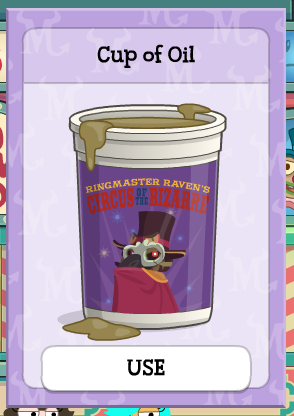 With the flashlight, you’ll be able to see through the darkness of the Haunted Lab. Walk around and go up the stairs, heading right until you find the Human Fly Mask. Take it and put it on, then head inside the Tunnel of Love and ruin the romantic moment…

The couple you scared will run away, so run two areas to the right and into the woods. Follow the debris (the directions are randomized, so they’re different every time). The same scenery is re-used so it looks like you’re in the same area. However, if you keep following the trash trail (there’ll be a random piece of rubbish either on the ground or on the highest grassy lump), you’ll eventually end up where the carnies are being hypnotized into monsters.

Eventually, you’ll arrive at this tree stump where some darkly-dressed dude is hypnotizing the carnival workers to serve him! 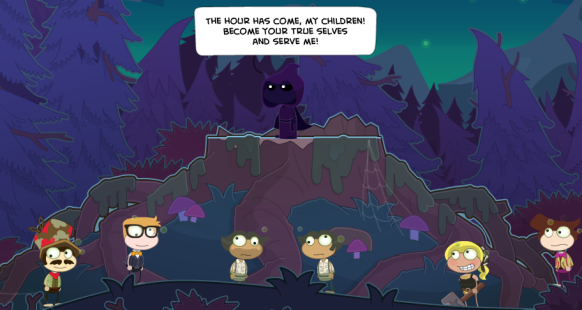 Once they finish transforming into his minions/monsters, night will fall. Go back to the carnival, and jump on this barrel to avoid the hunky cat monster: 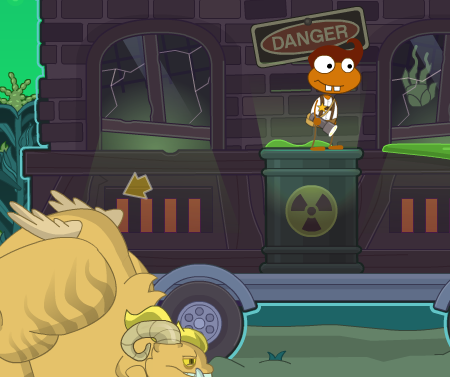 Now run past the Tunnel of Love and Merry-Go-Round, jump over the monster, and run into the next area. Follow Edgar into Ringmaster Raven’s tent. He says there’s a formula to reverse the hypnotized carnival workers from monsters back to normal, and it’s in the Ferris wheel guy’s back pocket. Leave the tent and go right to the Ferris wheel.

When you get to the Ferris wheel, equip the Hammer and press the spacebar to knock the guy out. The monster will fall from the Ferris wheel to the ground. Pick up the ticket with a Secret Message, which is helpful for the duck game later on.

Now head towards the Haunted Lab, jumping onto the Test-Your-Strength game to bounce above the cat monster. Inside the Haunted Lab, a monster will chase you – no big deal, just turn on your flashlight and run away! Once you reach the top, climb up the shelf and click on the box labeled “Black Light” to obtain a Black Lightbulb. 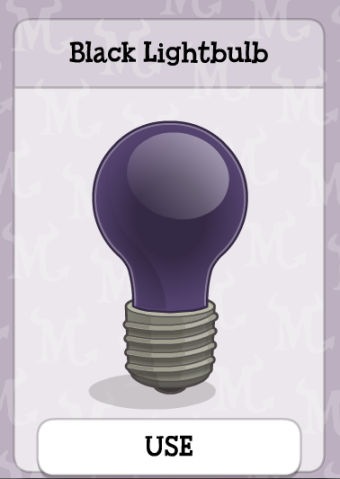 Now exit and go left to the duck game booth. While you’re running there, you’ll see this Big Glob Monster! (Hard to tell if this is Scooby-Doo’s cousin or SpongeBob’s brother!) 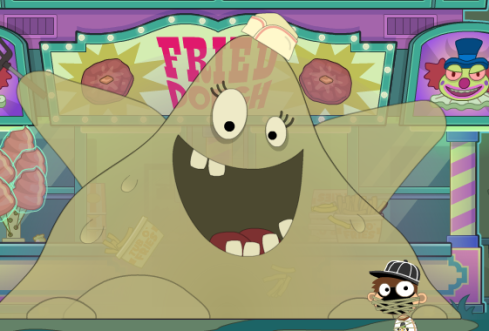 At the duck game booth, open up your inventory and use the Black Lightbulb to make your flashlight emit black light. Now click on the duck game and follow the colors by where it has the name “GORY” on the ticket, and fish the ducks out. When you finish, you’ll get this formula: 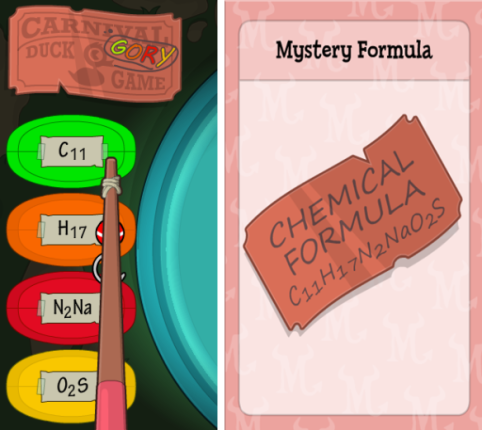 After you get the Mystery Formula, go to Honest Gabe’s Auto Repair (because the pharmacy is closed), and hop onto the first pedestal, then press the red “up” button. When you reach the top, hop on to the second one and mouse over the broken vent. 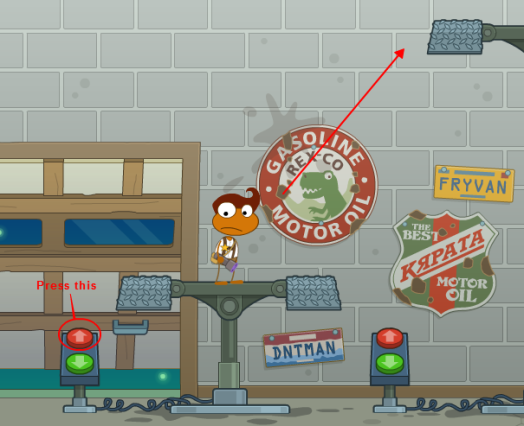 Inside the vent, follow the path and go left out of the vent. You’ll appear on the other side, where there are newspapers you can read to learn more about Ringmaster Raven’s tragic backstory. (Basically, he was a homeless orphan working at the carnival as “Bird Boy”, but was left behind when the carnival left town. He was blamed when Honest Gabe’s burned down and was exiled by the townspeople, left without a home… 😦 )

Anyway, click on all the newspapers to get through the vent and into the lab. Inside the lab, grab the three remaining containers – the yellow bromopentane, red sodium sulfidosodium, and blue ethylmalonic ester – and put them into the machine. Now you’ll need to create sodium thiopental (truth serum) and its byproducts:

Once you’ve got the Sodium Thiopental, leave the building and go back to the carnival, specifically where Ringmaster Raven’s tent is. Enter the tent, and Edgar will kidnap you and put you in a chair! And as revenge for being exiled by the townspeople, Ringmaster Raven (known back in the day as Bird Boy) wants to hypnotize everyone and make them his slaves! 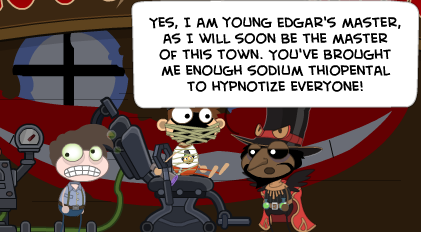 To get out the chair, use the Fried Dough to un-hypnotize Edgar. Once he’s un-hypnotized, he’ll release you and Ringmaster Raven will escape into the Mirror Maze. Go inside and you’ll find him hiding behind one of the mirrors. Equip your Hammer and use it near his hiding spot. 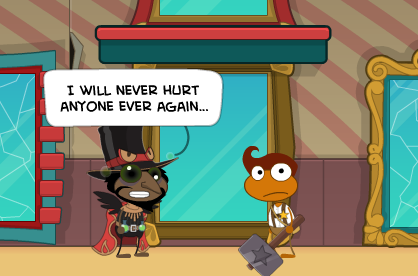 When you break the first set of mirrors, he’ll hop to the second level, where it’ll be hard to find where he’s at. He goes through six sets of mirrors, which you’ll need to smash with your hammer. After that, you’ll get to make him your slave, telling him never to hurt anyone ever again – plus he has to act like a chicken! Poor Bird Boy… Ringmaster Raven… and now the Incredible Chicken Man! 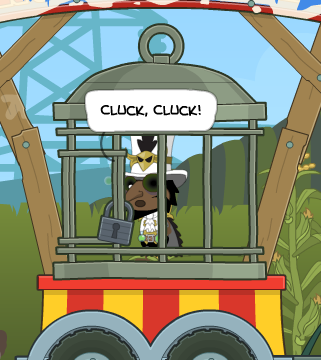 The next day arrives, and the carnival is all packed up and ready to leave town. When you talk to Edgar, he will award you the Island Medallion! At this, the carnival will start moving out. Congratulations, you’ve saved the Monster Carnival from its monstrosities! 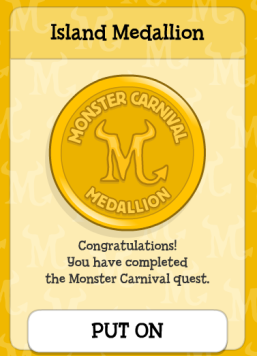 The town is safe, but now a prominent citizen is missing. Has the monster carnival claimed another victim, or is something else behind his disappearance? 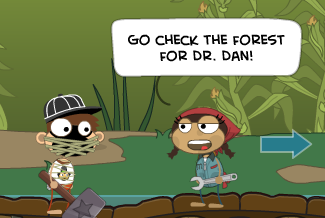 Dr. Dan is missing! First, run to the right and enter the forest. When you get there, you’ll find Dr. Dan, cowering and telling you to stay away. 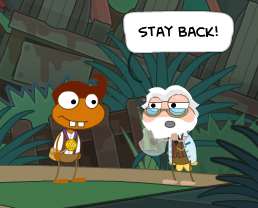 He’ll run away from you. Follow him up the rollercoaster, and he’ll say he’s a monster and that he needs a cure. Run past him, jump off the roller coaster, and pick up the Wild Mushroom Extract. 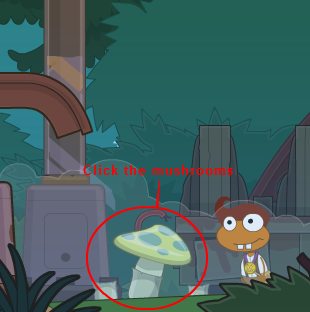 Once you get the Mushrooms, hop up the roller coaster and go left a couple of areas, entering Honest Gabe’s to the left. Take the Pickle Juice on the shelf.

Now, go inside the Apothecary Pharmacy to the right. Click on the soda pop machine for the last ingredient – a Cola Soft Drink. 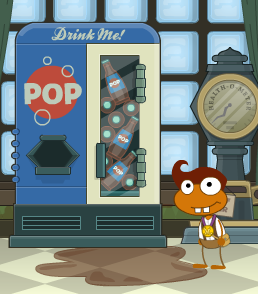 Then go start working on the formula. To complete it, you’ll need to get it to this:

Once you finish the formula, you’ll have Chemical X. Run back to Dr. Dan, who will grow horns. He says he’s forced to leave town, but the townspeople come at the last moment and tell him that they want him to stay. So he gives Chemical X back to you. When you use it, you’ll transform and look like one of the mean goblins from earlier!

(Note: You can’t keep this costume, even if you try to save it to your costume closet.) You can use Chemical X any time to transform into a monster – however, the effect will wear off when you leave the room. Anyway, that’s the end of the bonus quest! Hope this walkthrough was helpful!

These pictures are collected in your Poptropica photo album in the profile section.