and six years after the mystery first appeared…

What is Monster Carnival Island? The legend goes way back…

In early 2008, Monster Carnival Island appeared on the Map as “coming soon.” Plenty of Poptropicans were excited until it mysteriously vanished with no explanation one day, only to be replaced by the release of 24 Carrot Island. It’s been one of Poptropica’s biggest mysteries for six years…

The above picture, taken by Codien on February 4th, 2008 shows Monster Carnival (MC) on the map, along with Time Twisted – the name of Time Tangled Island before it was released. MC was expected to release as well, but never did. Though we don’t know why for sure, here’s what we do know.

In mid-2008, there was an “leak” of strange monster-like customizable parts, which are assumed to be from Monster Carnival. Codien (a former PHB author) investigated the leak and got the following response from a Poptropican called Legoless:

Ok, firstly, these items are all but impossible to get now. There was an ‘item leak’ in the multiplayer buildings. Someone managed to get their hands on unreleased items that somehow happen to be on the servers (I am guessing they came from Monster Island). So, obviously enough, they spread like wildfire.

But when the creators finally got around to fixing it most people lost their items. If you logged on in the following 2 weeks (I don’t actually know the precise amount of time this went on for) they were removed. I hadn’t logged on in that time so, oddly enough, I got to keep the items. – Legoless

You may notice that many of these are now a regular part of Poptropica. However, this was before even the release of Nabooti Island, which you may know is where the bubble brain helmet comes from, for example. (Type “411” in your Nabooti cell phone.)

While these items were still rare, the PHB had a competition in the summer of 2009 in celebration of one million hits on the blog. As for prizes, we gave away many accounts with the rare monster collectibles. This was still before the opening of the Poptropica Store. 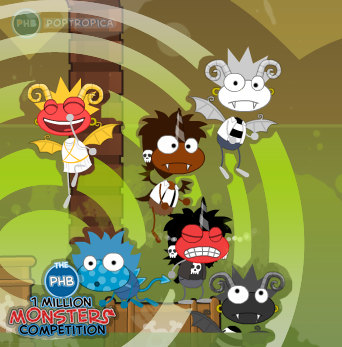 Two years after the leak, in October 2010, Poptropica released a variety of different “Furry Monster” costumes in the Store, and they are still available today. Each costs 75 credits, and members can access them for free. Apparently, that’s what the Creators decided to do about the leak!

Here’s what the girls get:

The boys get different Furry Monster costumes. Here’s what theirs look like:

In February 2011, there was a Daily Pop image titled “The Wayback Machine” with the caption “an early sketch for a long-rumored, never-completed Island,” likely a reference to MC Island considering the carnival setting depicted. It also suggests that perhaps we never got to see the island simply because it was never finished. Thanks to Poptropica Secrets for the image and insight!

On April 1st, 2012, the Poptropica Creators’ Blog posted about adding noses to all Poptropicans. Don’t worry, it was just an April Fool’s joke. However, Captain Crawfish did write this:

Not since the introduction of the Costumizer or the removal of the Monster Carnival map icon have we made an update this momentous.

That’s the first time the Creators have ever acknowledged Monster Carnival Island and its mysterious disappearance by name! The second official-Creators-mention came just a week after that – the trailer for Poptropica Friends was released, and from seconds 0:12 to 0:14, we’re given a subtle hint for “MonsterCarnival2012”!

When you type in that username in the Avatar Studio or on your friends list, you’ll get a character with the name Monster Carnival! Curiouser and curiouser…

Since the video was only posted in April, we had hoped for Monster Carnival Island to be released sometime later in 2012. However, that year has passed, and we still haven’t seen the island return!

Poptropica has bought some web domain names based on their islands (such as VampiresCurse.com) which redirect back to Poptropica.com, and a Whois lookup on MonsterCarnival.com shows that Poptropica did in fact create this URL on May 16, 2012, which means that they may have had plans for the island then.

At the beginning of 2013, a sneak peek captioned “Carnival of Costumes – maybe not quite a circus of values” surfaced on the Daily Pop. It later turned out this was for Night Watch Island.

However, on closer inspection, you’ll see “Mardi Gras” on one of the costume posters:

Mardi Gras, according to Wikipedia, refers to Carnival celebrations. Yes, maybe even like Monster Carnival, whatever that might be about! A few days after the sneak peek above, another image showed up on the Daily Pop with the caption: “Mardi Gras – These folks are ready for Fat Tuesday.” Again, however, this is actually from Night Watch Island, not Monster Carnival.

On April 30, 2013, Captain Crawfish posted this old notebook page of long-forgotten ideas for a Poptropica island dated late 2007 or 2008, around the time when Poptropica was just getting started. The blog post says, “As we developed it a little more, the “Haunted Amusement Park” took on a slightly different form (and name), but it didn’t end up becoming a real Island.” 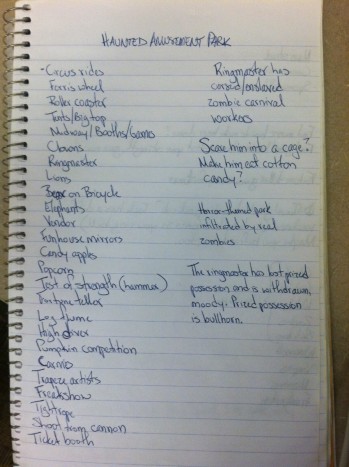 The “different name” for Haunted Amusement Park, as we know, is Monster Carnival. This post gives us some insight into what the island might have been about, with ideas on the right like “ringmaster has cursed/enslaved zombie carnival workers,” “horror-themed park infiltrated by real zombies,” “the ringmaster has lost prized possession and is withdrawn, moody,” “prized possession is bullhorn,” etc. On the left is a list of carnival elements which mentions things like funhouse mirrors, bear on bicycle, trapeze artists, etc.

At the end of his Creators’ Blog post, Captain Crawfish adds, “You never know, I guess.” Could this be a hint for Monster Carnival seeing the light of day in the future?

On December 17, 2013, the PoptropicaCreators channel on YouTube uploaded a new Poptropica Tour video. At about the 1:10 mark, the video shows the process of saving your game, and “monstercarniv” is typed into the username box! Now they’re just teasing us.

Mocktropica Island, which parodies Poptropica and its creative process, was released on December 19, 2013. Among the many things to explore on the island is this old page with a drawing of a monster and the words “Monster Carnival” scratched out with a big NOPE:

In January 2014, some Daily Pop images hinted at the possible return of Monster Carnival, featuring sneak peeks of fun house mirrors, monsters, etc. We’ll just have to wait and see where this is going!

On January 17, 2014, about five years after the great mystery first appeared, Monster Carnival Island was finally announced as the next Poptropica island. Dreams do come true!

And here’s the official island description:

In the dead of night, a caravan rumbles into town. The traveling carnival has returned! But this is no day at the park. Behind the lights and the laughter, the carnival harbors a dark secret. Buy a ticket if you dare, but beware — once you enter, you may never be able to escape the Monster Carnival!

In early February 2014, Captain Crawfish made a post on the Creators’ Blog coming clean about “the long, strange journey of Monster Carnival”. As it turns out, the island was simply never finished (until now!). Here is what he wrote:

Longtime Poptropicans know that Monster Carnival was supposed to be one of our earliest Islands. It was announced in 2008, and even added to the travel map with a message that said “Coming Soon.” Then it disappeared without notice.

There have been a lot of explanations over the years. Some were closer to the mark than others. Frankly, we’d like to let the conspiracy theories go on, because they’re more interesting than the truth. But it’s time we came clean.

Monster Carnival was removed from the Poptropica travel map because it wasn’t finished, and everybody was too busy with other projects to give it the attention it needed. That’s all! We really just announced it too early, got onto other things, and never came back to it.

But as Monster Carnival continued to live on in the imaginations of our players, we couldn’t let it go. What a great name! Every year, when we discussed what new Islands to make, somebody would say “Monster Carnival!” and everyone else would nod. Then we’d pick a bunch of other Islands to do instead.

Maybe we were intimidated. We all know what happens when something becomes anticipated for too long. Better to leave it as an unrealized dream, rather than risk not delivering.

Well, every dog has his day, and the same is true of a great idea for a Poptropica Island. Monster Carnival is very real this time, and we hope it is worth the wait.

Leading up to the release of Monster Carnival Island, PHB author HPuterpop wrote up some “Monster Carnival Files” to analyze what we knew about the actual island thus far. Check them out:

Finally, at long last, the island debuted for members on February 21, 2014, with a demo for non-members. Public access for Monster Carnival finally opened on March 20, 2014.

If you need help on this island, check out the PHB’s Monster Carnival Island Guide, a written walkthrough with pictures. Also, if you’d like to listen to the jaunty and spooky tunes of this island and more, our Behind the Scenes page has Poptropica music listed. We’ve also got trivia listed on the PHB’s info page for MCI. See you at the carnival! 😀

Like this page? Check out more at our Pop Plus collection!