Something strange is happening on 24 Carrot Island. People are going missing, and the virtual world’s carrots are disappearing as well. It’s up to you to get to the bottom of the mystery and to bring the Island back to its former splendor! 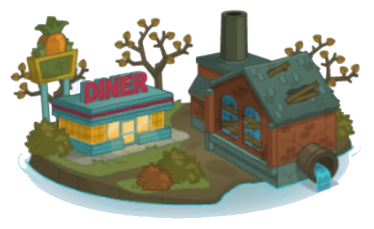 *Not to be confused with 24 Carrot Island on Poptropica Original.

For a written walkthrough on 24 Carrot Island, scroll down.

Welcome to 24 Carrot Island! Unfortunately, it’s all doom and gloom at the moment, because the town’s carrots have gone missing… and with it, their livelihood. Trees sway ominously in the background, and even the main signpost points to “Rot Land.”

Talk to the mayor, and he’ll ask for your help in getting the carrots back. 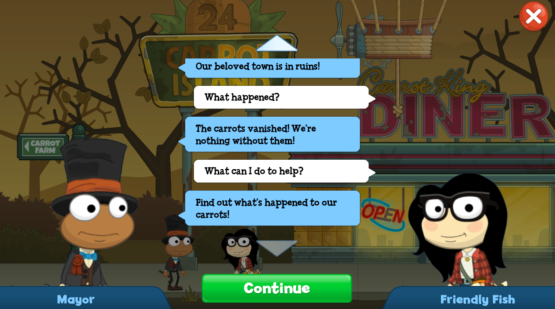 Enter the Carrot Museum (formerly a theater) and talk to Rhonda, the gal in the carrot suit. She wants to give you a free pass to the carrot movie that’s playing, but has misplaced the ticket. 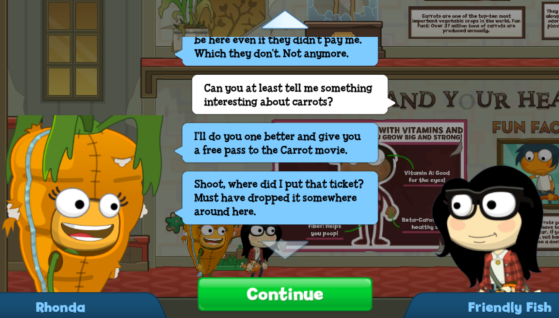 Go up and to the right. You’ll find the Ticket lying on the ground. 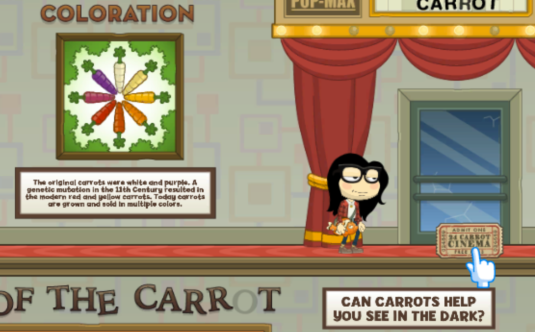 Now exit and head right. You’ll be on the factory grounds. Pick up the spring Part on the ground, which you’ll need later.

Go back left to Main Street and talk to the lady, Charlie, whose cat, Whiskers, has gone missing. She’ll give you Whiskers’ Empty Bowl.

Head into the diner and offer the waitress the movie ticket you snagged earlier – the best you can do for a tip. She’ll begrudgingly fill the dish up with milk, giving you a Full Bowl.

Now go further left, to the Funny Bunny Farm, and enter the red barn on the far left. You’ll see Whiskers locked in a cage, which you can click to free the poor cat.

Once you do, a cage will fall on you! Then your captor, Maynard, will reveal himself and his motives: he’s the only person to have escaped from the carrot factory, and he’s trying to catch its current regime leader, Dr. Hare.

Since his trap is now broken, give him the metal Part you picked up earlier. In return, you’ll receive some Blueprints for the factory’s vent system.

Maynard leaves, and meanwhile, you’ve still got to find Whiskers. So go over to the house next door and enter through the chimney like you’re Santa Claus.

Once you’re inside, run up to the top-left and turn the shower on. Whiskers will jump out. Put down your bowl of milk, and Whiskers will lap it right up. The cat will love it so much that it’ll now be following you! 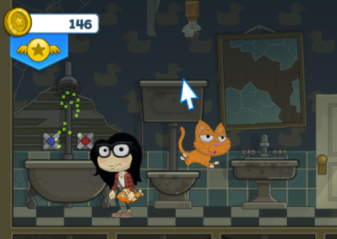 With Whiskers in tow, you can head back to Main Street and return the cat to Charlie. To thank you, she’ll give you a Crowbar.

Into the Carrot Cake Factory

Now you’ve got all you need to enter the factory! Hop over the wall and jump down, making sure to stand on top of the pipe hatch. Then, use your crowbar to pry open the pipe, and enter.

Go up, and you’ll come across some timed platforms. Walk over them when the platform closes the gap. If you fall, get back up and try again.

Once you pass through, jump up. There’s a mean old rat in the way. Hop on the ledge and wait for him to pass, then go past him and up the ladder. 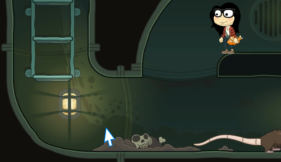 You’ll now be in the Engine Room. Power on the main engine by dragging the levers until they are all lit up.

Then run right, and hop up and over to the platform on the left side. Wait for the giant claw to come around, and hop on, letting it take you to the other side. Once you’re there, enter the vents through the entrance.

You are now in the vent system. Use the blueprint, to your left, to help guide you to the Processing Room. Here’s the full picture of the vent system schematic:

Along the way, you should find some Wire Cutters. Pick them up.

Then continue working your way to the Processing Room. Jump to the ground. Wait for the security system to automatically transport you to the Freezer.

From outside the room, Dr. Hare will announce that he knows there’s an intruder, but fear not, you can stay one step ahead of him by dismantling the security system. Click the small metal box on the wall labeled “Security Access,” and use the wire cutters to cut all the wires. That’s one business taken care of!

Climb up to the top and enter the vent system again. Use the blueprints to help you get to the Printer Room.

At the Printer Room, head right, making sure to go when the crates aren’t falling! (You’ll be knocked over if you bump into them.) Down by the printer, you’ll find a mind-controlled girl – it’s Shy Sky, one of the missing kids from the diner bulletin board.

Talk to her to distract her, and when her drone helmet pops up, press the power button to disable its effects on her.

Shy Sky will give you a printout with the System Password on it – “fuzzybunny.” Grab the paper and head back into the vent system, this time making your way back to the Processing Room. 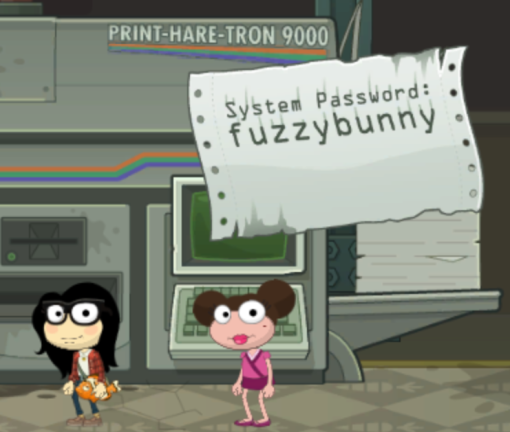 Now you’re back in the Processing Room. Talk the mind-controlled kids – Sleepy Bird and Magic Socks – to distract them, then press the power button on their rabbot ears so they’ll be free from its effects.

Then, go over to the right where there’s a door for “Authorized Bunny Drones Only.” As you are not yet one, Dr. Hare will mock you from inside and drop you through the hole you’re standing on.

You’ll find yourself back in the vents, but this time right by a damaged pair of Drone Ears. Take it and put it on – don’t worry, the helmet has no effect on you since it’s damaged. Head back to the Processing Room again. 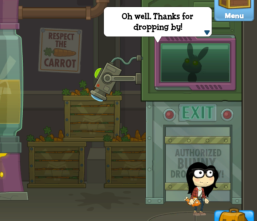 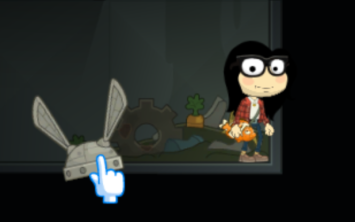 This time, with your rabbot drone ears on, go back over to the metal authorized-only doors and click. You’ll be allowed to enter.

And now, you’ll be face-to-face with the great pink menace, Dr. Hare! Thinking you’re one of his slaves, he’ll tell you to hurry and finish putting his plan into action. 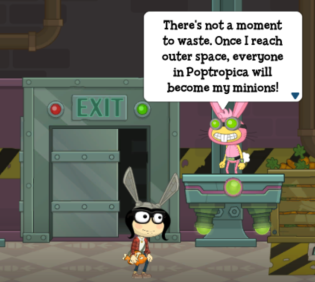 So, he’s using all the carrots he stole to power up a giant rabbit robot (affectionately called a “rabbot”) that will blast him to outer space, where he’ll send drones down to Poptropica so he can mind-control everyone into becoming his minions. Truly diabolical!

But you’re going to stop him, aren’t you? Climb up the giant rabbot and jump over to the platform with the super-computer on the right. Distract and de-hypnotize the final mind-controlled kiddo, Crazy Comet, and he’ll help you destroy Dr. Hare.

For now, you’ll be following Dr. Hare’s instructions, but the attack will come soon enough. Click on the computer and type in the password: fuzzybunny. Hit enter. Next, type in the command, as taped to the screen: launch rabbot. (Use the space key.) 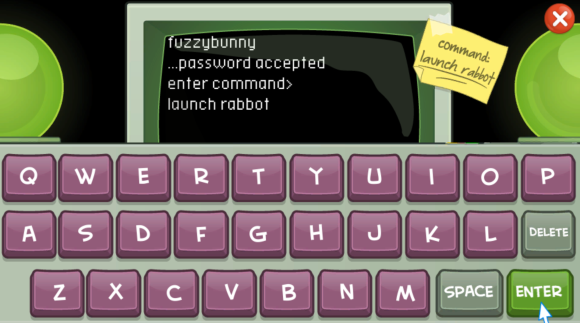 This begins the final boss battle. From up above, Dr. Hare will be sending his drones out from his giant rabbot. However, Crazy Comet’s got a plan: you can attack the drones using this big carrot shooter in the factory!

There are going to be 20 drones sent out, and your goal is to shoot down every last one. To do that, aim at a drone (the rabbot heads) and fire by clicking (or tapping). If one reaches the bottom, it’s game over, but you can keep trying.

When all 20 drones are done for, Dr. Hare will be a long away, but he sends one last threat: “you haven’t heard the last of me!” Still, he’s gone… for now.

A rope will drop down from where you and Crazy Comet stand, and you can climb up to get back to Main Street. There, you’ll see that the town has been returned to its former splendor, with all the kids you rescued safe and sound!

For your valiant efforts, you’ll be awarded 500 coins and a sweet new trophy for your house. You can also replay the island for more coins. Congratulations, you’ve completed 24 Carrot Island! 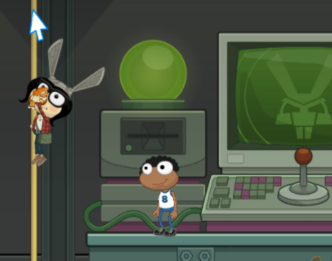 These are the displays from the Carrot Museum. Click to view the images in full size! 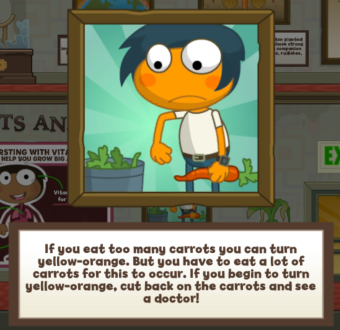