Hello once again everyone! Spotted Dragon here bringing you the July recap for Community Creations! This month’s theme was literature and the featured work is not in any particular order. Be sure to check out all the featured artists!

No clue what’s going on? Go see our intro post.

Note that some featured stories, while none are NSFW, can contain intense descriptions that may not be suited for everyone. Sorry DRTI fans, but that fanfic has a mature warning for a reason.

When you wake up, bright and early in the morning, when the promising rays of sun poke through the blinds and into your room, you forget. You forget your not living in a normal home, or that your life could end at any moment. You forget that bombs or weapons could plummet down from such a peaceful sky, ripping you away from those you love. You forget you will never see  your friends, you neighbors, your cousins, even that kid who picked on you in class, ever again. You forget the constant throb in your chest and throat and the flips your heart does too often when you hear a tiny noise. You forget you are living in a war. As  I wake up, I allow myself to absorb the reality- to take in the fact that this is not an ordinary day and that I don’t have to trudge myself over to school. School. I surprisingly miss that demented place- that place where I was a straight D and F student and nothing but disappointment. My thoughts are slowly killing me, so I force myself out of bed. A quick scan of the ripped up hotel room and I already can tell that my parents and the Pietermans were already out on the island. I grab the opportunity to take a shower, turning on the cold water. It was rare every one was out of the room so early. My parents moved to the Amity a month and 2 weeks and 6 days after the the first bombing started so they could help victims  in the hospital. Amity Island is currently the “safest place in the world” and yet it is anything but safe… READ MORE

The word choice and descriptions are totally immersive and paint a detailed picture. Not much is known about this fictional world yet, nor its characters or its relation to Poptropica, but it truly is off to a great start. A few grammar errors, but everything that Lilly wrote makes me want to read more! Find her blog here.

Keeper of Chaos by NineTenOnetyOne

Zeus’s glowing face turned pale as his breath hitched in his throat. The gaze he gave her remained unbroken, and he stared at her for what seemed like an eternity. As much as he tried to deny it, she was there, at the foot of his brilliant golden throne, staring him square in the face after lifting her eyelids, revealing those horrible, beady red eyes.

The gold rays of the heavenly light heavily shone off of the bronze armor plates that capped her shoulders, each pointed off with one aciculate spike. It was as if Zeus was looking at Apollo’s crown, and even he could barely keep his eyes open at the intensity. A strap crossed the goddess’s chest and down to her waist, acting as a holster to his brother’s trident upon her back. There was plain evidence that his other brother contributed to her aid, as his crown sat comfortably upon the mop of her electric blue hair.

Zeus could sense hands trembling on the solid gold coated arm rests of his throne. He clutched the ends of them to the point where they could be crushed from his mighty grip.

To imagine that a god as powerful as Zeus- the KING of gods, if you will- could be frightened of another entity was truly mind-boggling. Zeus was a god; superior to any living, breathing mortals. Who would cause the almighty god of thunder this much of a threat?

Delighted at his fearful reaction, her wide, mocking grin flash across her black lips, then parted to speak the words:

“Did you miss me?” she asked, her voice bringing back such horrible, vivid memories from the past.

This story too has amazing word choice and description. NineTenOnetyOne doesn’t miss a beat, throwing the reader right in the middle of a tense situation. It brings back a fan favorite Poptropican, Zeus, and is a great tale for those interested in Mythology. Each sentence left me on the edge of my seat. And this is just chapter one! Fine her DeviantArt here.

Okay guys, I’ll admit it… I’m a sucker for puns and this is adorable. I couldn’t not feature it. Proving that visual art can fit into the “literature” theme, ArtisticAsianBunny references Harry Potter (as I’m sure most of you can tell) by connecting the Ravenclaw house to our beloved Ringmaster Raven. How did we not see this earlier? I feel like he is an underappreciated character and this simple, but magical blue color palette does him justice. Find her DeviantArt here.

Of Darkness and Shadows by SuperGrape1

Our story begins in a college building on Mocktropica Island where a science teacher can be seen trying to give his class a lecture about neutrons and atoms, but they are too busy playing Mega Fighting Bots to pay him any attention. The science teacher just sighed as he sat down putting down his lesson plan suddenly to the teacher’s surprise a black looking smoke was coming out from his hands and he was freaked out by this. However, the black smoke soon stops coming from his hands and the teacher looks confused as to what just happened. Suddenly, a young lady walks up to him saying “hey brother, what are you doing?” the young lady asks the science teacher. “Sadly nothing, what do you need?” The science teacher asks the young lady revealing that she is his sister.

“I got an invitation to go to an island called Fantasy Island, and I think we should go, what do you think?” His sister asks with glee. “I don’t know Lidia, I’m a science teacher, and I have tons of paper work to do, and I don’t know if the principal will let me take the rest of the week off” The science teacher replied revealing that the lady’s name is Lidia. “I think that I can convince him to let you take the rest of the week off, besides you have been working very hard brother” Lidia says to the teacher smiling. The teacher just smiles as he says, “Yes, I know, but it’s just to keep Mathew in school, things have been hard for him since” The teacher says before he starts to tear up.  “I know Xavier, I know, but you could use a break, and I’ll have someone look after Mathew, alright?” Lidia said revealing that the science teacher’s name is Xavier, and Xavier just smiles as he hugs his sister Lidia.

“Thanks, sister, you’re the best you know” Xavier asks Lidia smiling.  “I know, and I’ll go talk to the principal, so I’ll be right back” Lidia said smiling, and with that Lidia walks off to go talk to the principal. Xavier suddenly clutches his head as a dark voice in his head begins to speak to him in his mind saying, “Embrace your destiny” The dark voice said coming from inside his head. Suddenly what appears to be flames of black fire circles around him trapping him and the room goes dark around him. “What’s going on?” Xavier asks starting to freak out, and panicking confused as to what, is going on around him… READ MORE

Not as much description as the others, but the plot can really pull you in. Lots of questions are left unanswered thus far in the story and curiosity can really hook a reader. There’s a lot of potential in how the fanfic can go and how it fits into the world of Poptropica, but a bunch of possibilities are already thrown in and this is just chapter one! SuperGrape allows the reader’s mind to imagine anything and everything. This story was even nominated for a Poppie! Find her DeviantArt here. Okay, I have many reasons as to why I featured this piece. First of all, I’m pleasantly surprised by the referenced story! The Illiad is a tale that many of you will most likely read in school (if you haven’t already) and is definitely a classic. Not the expected mainstream dystopian novel! Second of all, the time and effort that Bean put into this drawing is obvious. I remember simply seeing the lineart in a previous month, but the color is just stunning. The perspective is excellently executed and the shading of the neutral tones is breathtaking. Seeing this historic moment in a Poptropica-like style perfectly captures the educational part of the game and how fun it can still be. Find their DeviantArt here and here.

nurse: *pulls out baby MK* congratulations, it’s a girl, what would you name her?
MK mom: look at her gorgeous eyes, shiny as a jewel
MK dad: no, not a jewel, something more than that, let’s call her…
MK mom: i will name her… ruby
MK dad: ruby, hello ruby
baby MK: *giggles happily*… READ MORE 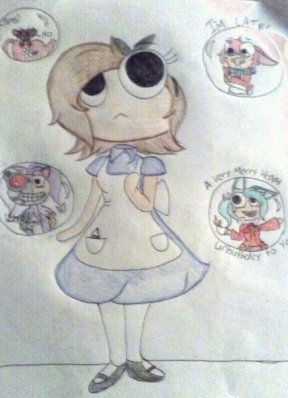 Diary of a Wimpy Shark by JelloMcFellow

August: How do I Participate?

Community Creations is a cool series for anyone in the Poptropica community to join in on. To sum up what it’s about, it’s basically a chance to show off your artwork, creepy fan-fic, realms, costumes, and anything else that pops into your mind.

If we really like the piece you submit, we will feature it here on the PHB! As long as it relates to that month’s theme. So what is August’s theme? August’s theme is…

With the Poppies coming to a close recently, almost everyone who was celebrating the event showed up in a dashing, formal outfit. Whether it dress or suit, everyone looked fabulous if I do say so myself. In continuation of this trendy attire, I thought that this would be a great theme! It also gives those who loved making Poptropica outfits, but aren’t artistic in the drawing sense, a time to shine.

Similar to the rules of our literature theme, all costumes will be accepted this month. However, other media is accepted too as long as it relates to fashion! Draw your Poptropican in their classy Poppies outfit or make a stunning pose on the catwalk in the Photo Booth. Create a perfect back to school outfit or write about your Poptropican’s odd experience in the clothing store on Night Watch Island. Didn’t win the Poptropica Costume contest? Send in your old submission for another chance to show it off! The possibilities are only limited by your imagination!

I will always be sure to let you know I have seen your creation. Bonus points if you make a compelling description for your piece! While quality counts, I’m mainly looking for something to simply catch my eye, so don’t be afraid to join in!

So what are you waiting for? Go make something awesome!