(Hey Poptropicans! This is a guest post written by TechWizard, and it’s a sequel to his previous Pop 5 post about the greatest Poptropica villains. Keep in mind that this list is purely his opinion and also contains spoilers. With that said, enjoy! –🐠)

Greetings, people of the PHB! It is I, TechWizard, everyone’s favorite guest poster, glitcher, and all-around complainer. Looking back on my previous Pop 5: Villains of Poptropica list, I honestly felt like I left out many deserving villains. So I’ve decided to do a round 2!

Also by the by: there be spoilers on the horizon! So turn back now if you haven’t completed these islands. (IT’S 2017, YOU SHOULD HAVE FINISHED THEM THOUGH!) Anyway, let’s get right into the list!

He’s the rather spooky baddie of Monster Carnival. His crime? Running a monster circus. Pretty awesome! Especially when he puts on that fancy cloak. Truly an amazing villain. 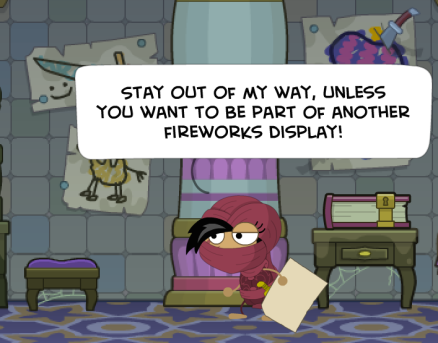 Ah, Arabian Nights, the Create Your Own Island contest winner. The first part isn’t too exciting, but then you get entangled in a fetch quest for one magic lamp. Some thieves cause some trouble for you in Episode 2.

Then, in Episode 3, the leader – who becomes a genie – is revealed to be the princess, who has a bad case of father issues. Everything works out in the end, as the princess and sultan return to their old lives as street merchants. Good for them… I would’ve wanted the money, to be honest.

One of the original villains of Poptropica, Binary Bard is an all-time classic. He brought technology to a medieval village! And then he went crazy and made a space fortress. And he stole the village’s power orb. And the princess. So you fly into space in an attempt to rescue her.

That’s not all… when he returns in another island, you have to go enter his dreams and make him good. And that’s the last we see of him… for now.

A psychopathic hunter straight out of a Jumanji ripoff, MVB rescues you and offers you food and shelter. Seems kind, right? WRONG. He wants to mount you over his fireplace. So you make a break for it. A big manhunt ensues, and you and another escapee work together to stop MVB! And then to add insult to injury, you steal his helicopter. All in all, a pretty intense piece of work!

Before we get to #1, let’s have some honorable mentions…

Your stereotypical Wild West villain. Like Scheherazade, he too has a gang. Only they’re not Arabian thieves, they’re cowboys with guns. Yeah… I hope you brought a bulletproof vest! 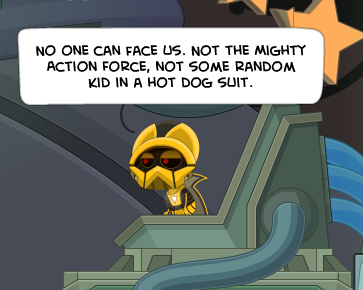 Robots! Portals! Giant cat robot! It’s everything a guy can ask for. Omegon, mistaking cosplayers and actors for actual heroes, hijacks a convention and makes it his super cool fortress. And you, as always, have to pull the plug on his operation. An epic fight ensues and you win the day! 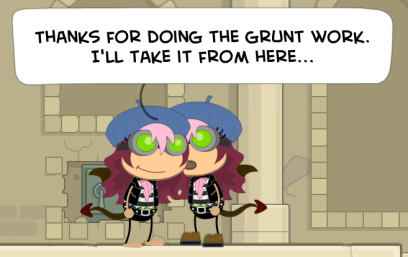 A classic case of identity swap! BB sends your player to the slammer while he/she roams free. Thanks to the Booted Bandit, you now have to break out of prison with the help of your new friends and clear your name!

And now for the number one villain… 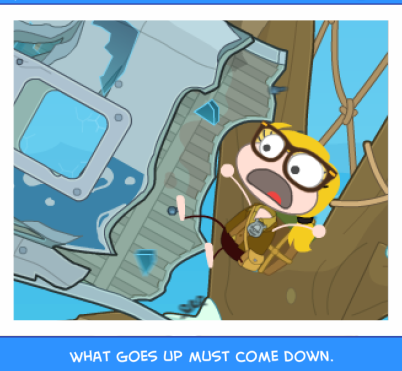 YOU, the player! Don’t think I didn’t see you littering!

I kid again! Now for the TRUE number one villain…

Black Widow! This lady is another classic villain. At first, she plays the role of an innocent detective. You and some creepy guy (who probably owns a white van and lurks outside schools) work together to stop the Black Widow before she can snatch The Scream. But surprise surprise, you and Creepo are captured by her. So you two make an escape and capture her. The end!

But then she gets put to sleep as well. And in another island, you gotta enter her dreams and make her good. THE END…

Well, that was a lot to type. I must depart now. I have places to go, exploits to find, people to bug.

The PHB welcomes guest posting from anyone in our community if you have something to share, whether it be sneak peeks, My Place in Poptropica stories, or any other ideas you might have. We also encourage sharing on our subreddit and the PHC.