This is the My Place in Poptropica story of White Ice, a Poptropican who played on-and-off with another game, Fantage, but ultimately chooses Poptropica. See below for details on sending in your own MPIP! 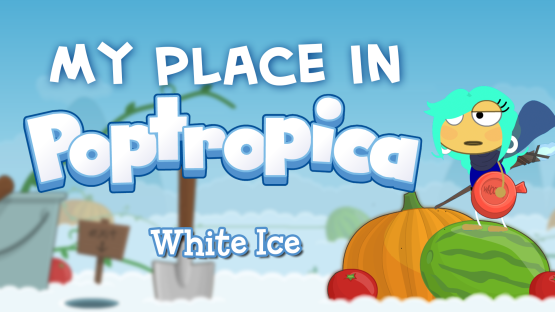 Hey guys! I’m White Ice, and my username is maryamkamal2197. I’m fairly new to the Poptropica community, and to blogging as well. Just to clarify, I’m not the White Ice that runs a Poptropica fashion blog, though I used to run the People of Poptropica blog along with Lucky Joker, and you can find me on Instagram at Skyestique. Here’s my Poptropica story!

I didn’t discover Poptropica through Funbrain, unlike many people. I actually discovered Funbrain later, through Poptropica!

During 2009, I was living in the Philippines for a short while, and during one of my mom’s classes (I used to come with her to them), there was a girl who came with her parents, and she introduced me to Poptropica. Back then, I was only about age 5 or so, so I don’t remember much about what Poptropica was like back then. But after she introduced me to it, I was hooked.

I didn’t know what walkthroughs were, so sometimes I would get stuck on an island for months. I don’t remember if White Ice was the account that was my first, but I do remember that it’s at least 4 years old. I regret making my username what it is, because it is kind of personal, but I was young, and didn’t know any better. 😛

I soon discovered another online game called Fantage, which caused me to play Poptropica a lot less. My cousin introduced me to it to me midway through 2010. Fantage is a rubbish game now, but back then, it was quite addicting for a kid. To me at the time, Fantage was much better than Poptropica, because you could chat with other players, and in Poptropica you couldn’t.

I would still check on my Poptropica account occasionally, but it wasn’t until my Fantage account was hacked during 2012 that I was fully pushed back to Poptropica.

These two years were probably the most active years I had on Poptropica, but I don’t get how I never discovered the Poptropica community! During this time, I was obsessed with completing islands. I discovered walkthroughs, but because some written walkthroughs missed details sometimes, I also used Thinknoodles’ walkthroughs. I completed all of the islands that were out back then. I never got membership, because my mom thought spending money on games was a waste.

I didn’t have a chance to introduce my friends to Poptropica, because most of them were Chinese and they weren’t really interested in playing English games. (I live in Hong Kong, and yes, it’s the same city Slanted Fish is from! By the way, Hong Kong is in China, but is considered a special administrative region.) Anyway, some of my friends actually knew Poptropica, because some younger kids would play it in the computer room during recess, but they themselves didn’t play it.

And then life got in the way…

During 2014 and 2015, I started to play Poptropica less and less, because at that time, I got an Instagram account, I became a Potterhead (Harry Potter fan), and I started to read more mature books than the Wimpy Kid and Geronimo Stilton I had been reading before. This led to me becoming a fangirl and joining Instagram fandoms. I even started playing Fantage again, because my cousin managed to get my account back. So basically I just grew up a little. And when I got my first phone, I didn’t touch Poptropica at all.

It’s funny how many breaks there are in my Poptropica story. I guess that’s because I’m a strange kid who has strange tastes.

During the latter half of 2015, I checked on my Poptropica account sometimes, and completed the newer SUI islands that came out during my 2014-2015 inactiveness. My return to Poptropica was probably due to finally quitting fantage, and to ignore the sadness I felt for splitting ways with my primary school friends. I discovered the PHB, and checked on it pretty often, but I never commented, and I didn’t explore enough to find the PHC yet.

On the 15th of June, 2016, I finally got my chance to get more involved. I was bored and decided to check out the PHB, when I saw the post announcing the Summer Kickoff Party. I thought, Hey, it would be pretty cool to finally actually talk to other Poptropicans!

At 12am on 21st June, I set multiple alarms for 6am on my phone, and put it right beside my head. And guess what? I didn’t wake up. In fact, I was about an hour late, and the party was already in full swing.

The summer kickoff party was an amazing first Poptropica community experience for me. That day, I met Lucky Joker, Red Thunder, and Zany Panda, who, including me, were the last people who stayed on after the party ended. Lucky Joker then had the idea to start a blog together. Thus, the People of Poptropica blog was born. (Unfortunately, it was hacked a couple of months ago, but has since been revived.)

I just joined the Poptropica community not too long ago, and I don’t plan on leaving anytime soon. Well, maybe I will, if the New Pop is disappointing. But probably not. I love Discord (where the PHC is) and blogging too much. 😀 It’s become my daily routine already. Get up, turn on my laptop and go on Discord. If I’m ever famous, it’ll probably be because I’m on Discord way too much! :’D

I have no idea how to close this up, but thanks, fellow poptropicans and POP bloggers. And thank you, for reading my Poptropican story.

Hope you enjoyed this “My Place in Poptropica” story! Feel free to send in your own (please include a minimum of 550 words, type with good spelling and grammar, divide it into labeled sections, and include your username). Look out for more community MPIPs in the future!

15 thoughts on “My Place in Poptropica: White Ice”