It is the year 201x. Doctor Cobalt sits down on his recliner, drinking the aged grape juice his robot servant gave him. He looks up at the screen embedded into the wall, scrolling through the PHB’s archives.  “Hey,” he wonders aloud, upon noticing that the PHB had reached 24 million hits in April of 2016. “Did we ever celebrate that?” the old, discolored scientist asks, to no one in particular.

He gets up from his beloved chair, placing the glass down on the table. Grabbing a flashlight, the doctor proceeds to walk down the rickety spiral staircase. He shines the flashlight into a darkened room. “Well fellas, I finally found some use for all five of you.” The old doctor laughs, taking the time-watch out of his lab coat.

Wihi, Cobalt here! A white blast of light hits him from behind.

“Wait, you have to reschedule the Top Five Wanted Gaming Features for another day! I’ve come from the year 201x, and I’m here to tell you, you’ve got to do something for the PHB viewers for helping the blog reach 24 million hits! How about a little contest?”

Well, alright. I guess we can have a contest, but I’d like it to be a Top Five post at least…

There is a lot of unreleased material without specific cards in Poptropica’s files, and some that are so mysterious and awesome, you almost feel compelled to speculate about them. From a never before seen Astro-Knight to a pepper gun, these items sure are fun! 😉

So for starters, all these items appear on SUI and Non-SUI, probably meaning they’re having no plans on releasing these items. While they are awesome, I will admit, I do see no purpose for them anymore either. Though, let’s get on with it! (Trust me, I’m showing you the best of the best!)

Also, I didn’t steal these pictures from anyone, I just thought it would be easier to take screenshots from my Poptropican’s closet, check it out for yourself! My username is: CaptainSpencer 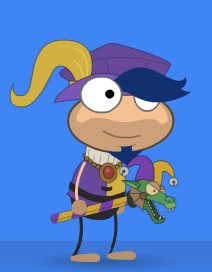 There’s more to Mordred after all! While the item name is called tBardStaff, it does look better with Mordred than with Binary Bard. (It makes the jester hat less repetitive, I’d say.) Other than on an ASG that’s been patched, I’m sure many of you haven’t seen this one before!

I’d imagine this samurai was planned to have been obtainable somewhere along the road during Red Dragon‘s development, but it never saw the light of day, always sneaking in the shadows of Poptropica’s files… Well, hopefully now this costume gets the gratitude it deserves! One thing is for sure, this armor is ancient!

This ninja honestly would’ve been my favorite outfit back in the day. It looks like a mixture of all the ninja costumes possibly obtainable now, though. 5/5 Shuriken Stars! 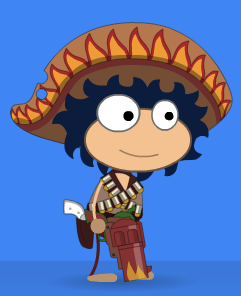 That’s right, the villain with without a doubt the best character design (El Mustachio Grande!) was originally going to have an awesome gun. It’s called the pepper gun, but the pepper pistol sounds a lot cooler in my opinion. 😉

Anyway, I get why they took it away; it really does distract from his outfit and he already has a pistol in his holster. Though, maybe they could’ve downscaled it a bit?

1. Rock and Roll All Knight! 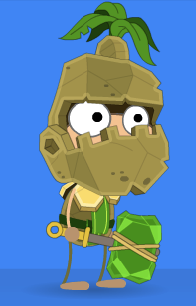 This outfit is definitely boulder than all the other ones I showed you! While the emerald hammer is a whole different unreleased item of its own, I noticed the color palettes were similar, and I kind of fictionized it together.

So hopefully you all enjoyed this pop-in to a never before seen Poptropica past. I definitely think all of these were worthy items back in the day, but I guess releasing them now wouldn’t make much sense, would it? 😛

Now that the outfit preview is over, it’s time for a fun little contest!

Any amount of battle stars, credits (max. 5625), name and unreleased outfit (from this post) of your choosing is up for five lucky commenters – all you have to do is submit a brief backstory to a Poptropican wearing said outfit. You also need to tell me the username, and if you win, I’ll pm you the account credentials on the PHC.

I’d like the secret samurai with the name Firstname Lastname, 5 battle stars, and the maximum amount of credits! I’d like the user to be FirstNamesSwagAccount. Here’s the story:

The secret samurai was named Sammy Samurai and had an awesome sword called the Sammy Sword. He slew all the bad guys and got babes with it.

Of course I’d like the submissions to be a little more serious. 😉 The contest ends precisely a week from now! What outfit will you choose?

Well, back to the future for me! Until next post pops around, Poptropicanos…

Creator of Rebel Group. I'm also a musician, find me @witchotel on SoundCloud! View all posts by Spencer