Escape from Pelican Rock Island is now released to members for Early Access! You heard it right, it’s now open! Non-members should not worry, though. Poptropica has an island demo in store for you – and don’t worry, the full island will probably be out to the public in a few weeks! 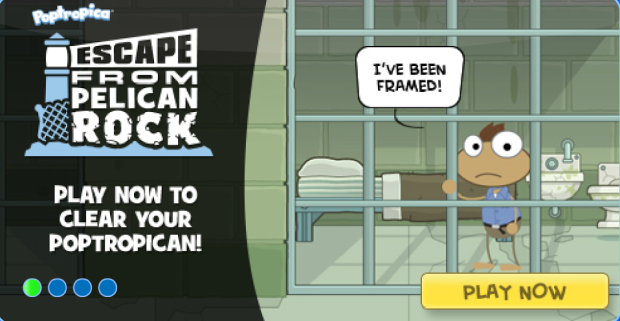 Poptropica has updated the homepage with some prisoners running along the screen, and Escapee Dr. Hare is even behind the pack! Also, the Dr. Hare hula-hooping animation loading screen has appeared in other places outside of Realms, including EFPR!

What are you waiting for? Play Poptropica’s newest island!

Afterwards, check your position on the World Champions map and share your prison stories in the comments below!

Stay tuned to the PHB – we’ll have a walkthrough up as soon as possible! In the meantime, feel free to ask questions in the comments.

35 thoughts on “Escape from Pelican Rock in Early Access!”