After all the rumors and speculation, it looks like it’s confirmed. Here’s the news we just received:

JANUARY 18, 2013 – Mews Foundation seismologists have confirmed the unthinkable: Poptropolis Games is on the verge of sinking back into the ocean. As the Island’s shaking intensifies, it seems clear that it will slip entirely beneath the surface of the Poptropica Sea by January 24. “We’re doing our best to accommodate as many athletes as possible before we sink,” said the Games’ master of ceremonies. “Be we recommend anyone who wants to compete does so as soon as possible. Who knows if the Games will ever rise again?”

Sounds like Poptropolis Games could be gone in as soon as a week! You may want to take this opportunity to visit Poptropica and play it.

Yikes! Just like the fate of Monster Carnival, Poptropica is taking an Island off the map! When you look a the map, it seems to be sinking and when you put your cursor over it, the outline goes into the water: 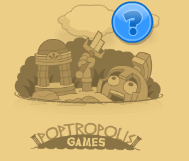 And then when you land:

Uh oh! There’s water on the island! So let’s follow the Creators’ suggestion! Go play Poptropolis Games NOW before it sinks forever by January 24! Take our handy walkthrough with you! NOW GO!

Actually, don’t. I still have some story to tell.

So we have the Cat Burglar Costume, a Whoopzie Cusion (parody of Whoopie Cushion), and the Burnt Orange Tan Power. And as usual, the costume is only available during Early Access! Which hasn’t been announced yet. But it will soon! Speaking of Night Watch, the PHB discussion page for it can be found here, and this is the description:

After the stores have closed and the shoppers have all gone home, the mall is your playground. But are you alone on the night watch… or is someone watching you? From escaped animals to creeping cat burglars, get ready to find out what really happens after hours!

Interesting. Hopefully, we’ll get a release date soon! But I think none will top Zomberry Island in my opinion. 😛 Check out the Island Help page for the Night Watch trailer, discussion, desktop wallpaper, printable poster, and tour for more info.

That’s actually it this week. 😀 So go finish Poptropolis within a week and check out the Night Watch resources! I wonder what happens if you save on Poptropolis and it sinks. 😛 Hmm…

Have a great weekend! 🙂 Cheers!

I'm (almost) 16, and have been to the US Capital, Washington DC for a school trip! View all posts by Shaggy Tornado

90 thoughts on “Night-Watching the Games Sink”