For Green Seal’s post about the Honey Nut Cheerios ad on Poptropica, scroll down below!

[Update] DaVinci: Everyone, there is a new PCB post. I don’t think it’s big enough to merit another PHB post, but there is some pretty sweet info in it – regarding the upcoming membership feature! For example, the Creators hint that “This is key, since we are planning on releasing some pretty sweet islands this year!”

Regarding the many concerns about Poptropica itself still being free, the PCB mentions – “Remember, even if you don’t have credits or membership, the Poptropica Islands are always 100% FREE for all to play!” So, this is ultimately awesome.

There’s a sweet new advertisement on every island on Poptropica… for EVERY AGE. :O I don’t think this has ever happened before!  This is a historical moment *tear*.  Um, anyway, it’s the Honey Nut Cheerios: Honey Defender Game Ad (Thanks Bobitator for the update!).  This advertisement doesn’t have any plot or task; there’s just a costume, a video, and a quiz game. 😀 You just go inside the huge hive and jump around. 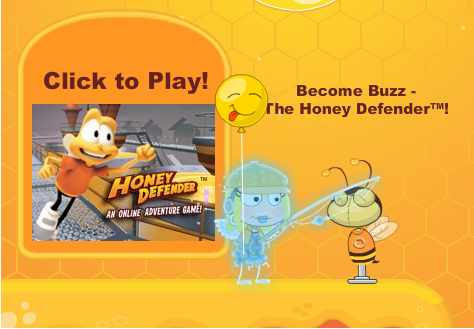 *announcer voice* Now you can become Buzz, the honey defender!  Explore, collect, and defend the honey!

Yeah, I just took that from the video ’cause I was bored. 😀 When you click the link to the game, you are directed to the game on Funbrain.  You can also play it at: http://honeydefender.millsberry.com/, although to play the full game you have to put in a code from your cereal box.  You can play the demo version, though.  I can’t play either because I don’t have unity web player. xD

In other news, there’s another sneak peek of Reality TV Island posted in the Creators’ Blog:

Still stuck on this island, I found some people playing a game with small sliding pucks. I don’t think the mime is going to win this one.

It shows some kind of weird game that to me looks similar to pool or something… IDK.  The characters above are probably the contestants you are going against in RTV.  Some new characters are the chef, the elder woman, train/bus driver (I’m guessing), and the elder man on the right.  I think the place where the mime is is where you would be… I’m not sure, it’s just a random guess. 😀

This is all for now!  Be sure to check out the below posts: