Following up with Golden Eagle’s post about Halloween hitting the Poptropica Creators’ Blog, it seems that it has also arrived in-game as well! Besides the spooky costumes released to the Poptropica Store yesterday, there have also been some new strange ones appearing around multiplayer rooms.

As mentioned in yesterday’s post, a new mini-quest (which may or may not be an island) called the Haunted House is coming just in time for this crazy festival! Many of the Haunted House’s costumes seem to have been leaked, similarly to the Monster Carnival leaks. Among the outfit surprises are:

It is said that dummies similar to the ones in Super Power Island’s Masks & Capes store will randomly appear in multiplayer rooms for a period of time, which you can Costumize from to get these costumes. This is probably how this Halloween ‘leak’ happened. Be on the lookout for Grim Reaper dummies in your Multiverse room if you want that scythe!

This morning, I was hanging around our Poptropica Help Chatroom, and decided to meet in a Multiverse room with the rest of the online users. In this collage of pictures below, several of the above costumes mentioned can be seen. On another note, I also saw Golden Eagle there (with yellow hair and a gray guitar), as well as managed to Costumize some others to form my Poptropica Halloween costume for this year. 🙂

As you can see toward the end of this picture, I met a player whose in-game Poptropica name was really ”Elmo PWNS”. Now I’m not sure how he did it, but according to Deathstalker (Seph), it’s a cheat that only 2 people know how to do. Sounds awesome, though!

One totally spectacular sight from today was the Fact Monster (he is also shown toward the end of the pic). Fact Monster is a website that sponsors Poptropica, and for those of you who have been to Time Tangled Island, you’ve probably noticed the educational ”Fact Monster” fact bubbles. Their site mascot is a red monster with purple wings, and this pretty much how he appeared to look like on Poptropica.

A couple months ago, around the time Astro-Knights Island was released, people started to see a weird mouth that curved upward and had three sharp teeth poking above it. At first, no-one knew where they came from, but now it seems that Fact Monster was the one who brought it around. Because FactMonster.com sponsors Poptropica, you might be able to call them ”Poptropica Creators”. After all, FM had the ability to change his Poptropican’s name to ‘Fact Monster’! 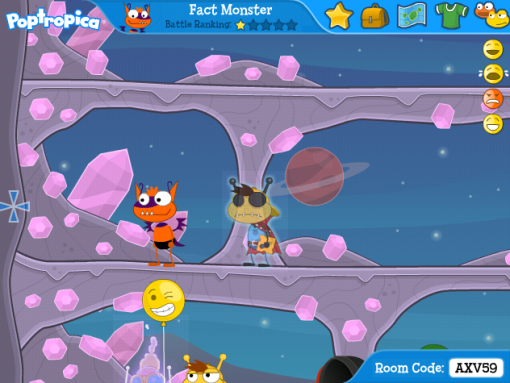 There have also been rumors of a Poptropican named ”Tinker Bell” roaming Poptropica! Because Tinker Bell is a Disney character, could this mean that Disney is hoping to be affiliates with Poptropica??

But there comes a mystery with the arrival of Fact Monster. Mostly everyone who was online at the PHB’s chatroom at the time of his arrival did not seem to be Fact Monster himself, but then who could it have been? Fact Monster was probably someone in the chatroom, because he knew exactly which Multiverse room to go to. Either that, or the Creators have a list of which Multiverse rooms are currently open and who is in them.

One of the guests online at the time was someone called ”Zerror”. At one point he said ”Boo?” to the public, but other than that, nothing much. I decided to private-chat with him. Is Zerror who he seems to be? This was the dialogue we went through:

At this question, there was no reply. Very interesting… and suspicious. Do you think Zerror is the Fact Monster or not? (By the way, a search on the username ”Zerror” at the Avatar Studio shows the name Undefined Undefined and a guy with the black Nabooti turban and Thornax Launcher from a recent LEGO Bionicle ad.)

In another Multiverse room, I found a Garden Fairy dummy. Like with Super Power Island’s hero costumes, clicking the dummy would let you Costumize from it. This Garden Fairy was wearing a red dress, fairy wings (from a Tinker Bell advertisement), curly red hair, and best of all – a candy cane from last Christmas.

The picture above shows that Sleepy Melon has Costumized the dummy. When I hovered over her character, it showed her face with the dummy’s skin. Funny glitch – sometimes, it even happens with the eyes.