Yikes, it seems that they’re at the dumpster with someone’s missing keys! Must be another mishap in the unfortunate life of Ned Noodlehead. Thanks for the news about the sneak peek (shown below), Obiwan2324!

Ned Noodlehead decided to take a break from hiking, so he went back down the hill and walked downtown, where he was hoping to get some lunch after being unsuccessful in grabbing some seagulls’ eggs. He walked around the island central, considering all the restaurant possibilities. ”Yo, Comic boy, over here!” called a voice to the side. Ned Noodlehead spun around, staring at the little crowd that had gathered before him. ”How did –?” he began, but was cut off by his adoring fans. ”Noodlehead, I’m a big fan of yours!” ”I heard that you saved an island from dangerous criminals!” ”Your comics rock, man!”

”Gee, thanks.” Ned grinned about his sudden fame among the citizens of the strange island. A kid wearing a ”Brief Encounters” T-shirt with Comic Kid’s face on it shouted, ”Can I have your autograph?” Less than a second later, he was surrounded with dozens of pens and papers. Ned tried to sign as many as he could, but his hand soon got tired. ”Guys, thanks a lot, but I really gotta run. I haven’t had lunch yet!”

Another fan, who was wearing a puppy dog costume, tapped his shoulder. ”Oh, you’ll love the Cartoon Dog. They’ve got lots of tasty stuff there. C’mon, I’ll show you.” She led the way to a building with a hand-drawn sign reading ”The Cartoon Dog: Taste the comics!” The screaming mob of fans followed them inside, but the puppy-costumed girl didn’t seem to mind. ”Table for two, please,” she told the waitress standing at the front. The waitress, who was wearing a white uniform, smiled and showed them their seats. Meanwhile, the rest of the fans had finally realized that it wasn’t necessary to hog up all the restaurant’s space, helped by the manager who had to take them all outside. The restaurant manager winked at Ned.

”My name’s Comical Dog.” She reached her hand out, so Ned shook it. ”I’m Ned–” ”Oh, you don’t need to tell me who you are. Everyone here knows you; you’re the superhero who saved Super Power Island. Ned Noodlehead, am I right?” ”Yeah,” laughed Ned, very pleased to know that others knew about his heroic efforts. ”But I couldn’t have done it without a very special Poptropican!” This day is going so well!, thought NN, thinking that good fortune was finally entering his life.

After a pleasant meal with lots and lots of cookies, Ned Noodlehead sat back, declaring that his stomach was now very well-fed. He managed to resist a satisfied burp, just when Comical Dog volunteered to pay for the meal. ”That’s kind of you,” offered Ned. ”Thanks,” replied Dog, looking down at their table. ”Hmm, we seem to have made quite a mess with our leftover cookie crumbs.” She chuckled and picked them up with a tissue. ”There’s a dumpster out at the back; let’s go.” So Noodlehead followed Comical Dog out of the restaurant.

A ghastly smell filled the atmosphere as they stepped closer towards the dumpster. ”Ick,” gagged NN. ”Don’t worry, kid,” smiled Dog, who was now standing right in front of what Ned called ”the box with bad smells”. She tossed the wrapped tissue with crumbs inside the dumpster, then said, ”Sorry, Comic guy. I have to get home now. See you around!” ”Bye,” croaked Ned, feeling unable to smell the stench for much longer. Comical Dog jogged away, and Ned decided to leave to.

It was only when he’d arrived back at the front of his comic shop in Super Power Island did he realize that he’d forgotten his keys. Without them, he couldn’t unlock the door to his store. Oh no, oh no, oh no! He remembered placing them on the Cartoon Dog restaurant table, as he was explaining to Comical Dog about his comic shop. ”Nooooooo….!!” wailed Ned Noodlehead. Comical Dog had thrown his keys away!

And so this was how he came to be down in the dumps for the rest of the day. (Thanks for the joke, Cool Wing!) 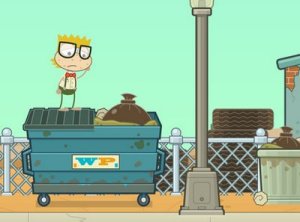 Blog Post Title: Trashy Day
Description: My day was going so well until I realized that my keys were missing. The last time I remember having them was at lunch, when I threw my leftovers away. I’m afraid they’re probably in the big dumpster out back.
Image URL: http://2.bp.blogspot.com/_q9BePaDQLzI/SlOi3_ZZVNI/AAAAAAAAAE8/ARaifeq4X14/s1600-h/trashy.jpg
Image Name: trashy.jpg
Posted By: Comic Kid

Show your support to the Poptropica Help Blog today! Motionman95 has created an awesome desktop wallpaper for all PHB fans to use, and it broadcasts the message ”I ♥ the PHB!” Click on the link below for the image, then right-click on it and select ”Set as Background”.

On another note: WordPress has changed the smilies by default, which is why they now look different. Although it seems that some of us don’t like them too much, there isn’t an option to change them back. Sorry for any inconvenience caused. 😦

A new page has been added – ”Typing Tricks”, in the Cool Stuff section. Learn what text you need to type to add in smilies to your comments, or discover how to make your words bolded, italicized, or underlined. Go check it out now!

53 thoughts on “Don’t trash your wallpaper!”