Ready for some Poptropica swordfighting? It’s gonna be legen—wait for it—dary! Legendary! Right, to get started, head over to the Map and look for the “Legendary Swords” island. This adventure is available to everyone!

On a distant planet, a hero explores a strange land to discover a race of aggressive and bizarre robots who are planning an invasion of Planet Poptropica! The only way the hero can stop this invading force is by using a series of hidden mystical swords that are scattered throughout the planet. Driven by courage (and a little fear), the hero must stop the invading robots and their diabolical master; the mysterious E. Vile! 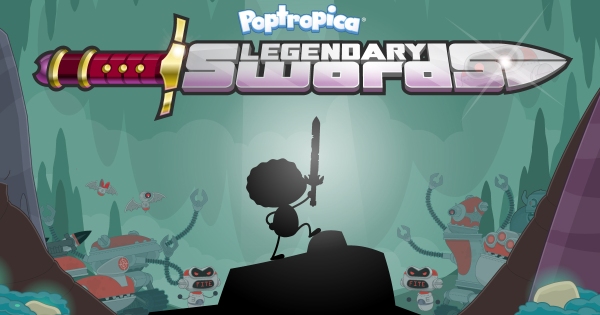 Scroll down below for a written guide, complete with pictures.

Buckle up—you’re about to take off into space!

You’ll get to watch an introductory cutscene in which you fly around space, passing Pewter Moon, Ice Planet, and Lava Planet. Then, you’ll come across a jungle planet (not the mechanical jungle planet from Astro-Knights). Space sure is peaceful…

As if on cue, explosions will arise from the planet. Curious as you are, you go down to investigate. When you arrive, you see a bunch of alien animals running away from… something…

Go to the right, and then go up. You’ll notice a cave. Go in.

Navigate through the cave. Drop then go to the left to see a hidden thing that isn’t important to the plot: a broken robot. Yikes.

Continue going right. A pop-up will appear on the bottom, pointing out the stone in the stone. Click on it to receive the first storyline sword in the game: the Rusty Relic.

The pop-ups will give you a little tutorial. Before you face off against anybody, try out some moves. Why not? Might as well.

When you go to the right a little, you’ll encounter your first health crystal in the game. Whack it with your sword until there’s nothing left. Later, when your health bar decreases, you can boost it back up with these health crystals.

Somewhere in this cave, if you go to a section with bones on a dark cave wall, there’s a shiny skull. Click on it to obtain a Skull Mask. It’s optional, but why not pick it up as a souvenir while you’re here?

If you got hurt, take a health crystal or two, but make sure to use them only when you need to. (Before I got the card, I purchased a costume with a sword, so I’ll be using that for now. You can use swords from Store costumes that have them in this game.)

Continue on to the right, where you’ll see two robots discussing a plan for invading Poptropica, led by a guy named E. Vile. Sheesh, how many overlord wannabes will be in Poptropica? The Charge-Bots (as I call them) will notice you. Jump. Attack. You get it.

Then, continuing on and fighting on, you’ll encounter a Laser-Bot. Careful, because it shoots lasers at you (hence the nickname). Fight, fight your way on through (don’t try to lead the bots into that pond—E. Vile must be smart to make the bots water-proof).

Then, you’ll encounter a bigger version of the rocket-bot, whom I’ll call Momma Turtle. Camera Bat will tattletale about the human who has been reducing the robot population (you). Momma Turtle will start attacking now. Go to the middle of the bot itself and attack. There will be targets on the ground every once in a while to indicate where rockets will be heading. Unlike the smaller version, the rockets don’t follow you.

Try to make it so that Momma Turtle will be damaged by its own rockets as well as the fury of your sword. Once you defeat it, heal yourself and climb up the vines. On the first platform, there is a health crystal, so collect it.

Along the way, you’ll notice boulders falling, and you’ll encounter Laser-Bots. If there are multiple at once, take your fight to the main ground. It’ll be worth it to give yourself more space to fight.

After you defeat all the Laser-Bots, a vine will drop down to allow you to continue up. Watch out for the boulders, and go up.

Mr. Boulder will start throwing boulders at you. But for now, it’s only one at a time. Dodge ’em. Make sure you get to those health crystals first. Fight. Be careful when he starts picking up and throwing boulders like crazy. Go a little bit in front of him and run! When he stops, he’ll pause, since he’s exhausted. (Get it? Exhausted? No? Stop with the pun? Okay.) Attack. Repeat this a few times, and he’ll explode eventually.

When you defeat Mr. Boulder, the rock next to him collapses, revealing another sword! It’s the most powerful in the game (so far) and it’s called… The Bolt! I like to call it the “Zeus Sword” but oh well. Get it, and a few bolts of lightning will appear. Go to the right. I think it’s a good idea to hold onto the Zeus Sword for the rest of the game.

Tip: Different swords have different attack powers. You can also get new swords from some costumes in the Poptropica Store! Here are the two you’ll encounter in Legendary Swords:

When you go right, you’ll see Charge-Bots and Laser-Bots, providing you the opportunity to try out your new sword. As you’ll learn, it’s pretty powerful. 4 stars. Woo.

Defeat the few robots and snatch the health crystals. Camera Bat tattletales again to a robot I like to call Master-Laser. 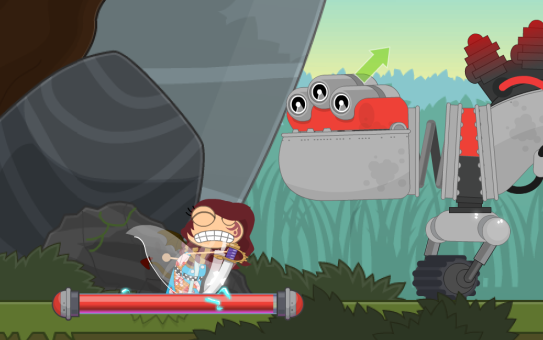 He’s pretty easy to defeat though. Go to the middle of the bot, and jump when he uses the laser. Fight him from the middle, and eventually, he’ll explode.

Continue on to the Spider Forest. Here, there are little spiders, and then there are big spiders—and all of them will start getting feisty if you get too close! Slash your sword when necessary. 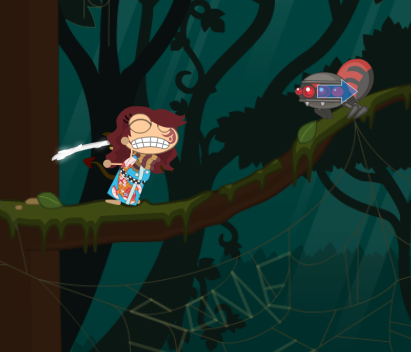 Take some time to laugh at the Charlotte’s Web spiderwebs on the way.

Navigate through the trampolines and vines, making your way up and fighting off spiders as necessary. At the top, go right.

Wrong. Camera Bat goes into its head and turns Big Fella on. Eep…

Nice kettle head, though. Anyway, go on one of those platforms that shoot you into the air. The robot will follow you. It is immune except for one spot: the area where a clock and a tube is.

Jump when it attacks the ground. When it pauses for a second, attack the area that is glowing red (the clock and tube). Repeat this several times. Heal when necessary. And eventually, the thing will explode… revealing its… boxers?

Then, a mysterious flying gold thing will fly in and open… revealing… him. E. Vile. As a hologram.

You’ll have a conversation with him, and he’ll admit to trying to take over Poptropica. He wants to get rid of you first – but not if you can help it! At the end of the verbal showdown, you tell him, “You’re going down!”

E. Vile’s hologram will shut off and fly away. Your space shuttle will appear and you go in. 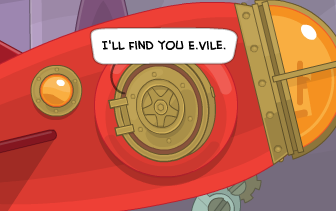 We have come to the conclusion of this adventure. For now. Will we see E. Vile again?

Maybe. You will win a Bully Bot costume as a prize, which you can find in your Store items inventory along with the Rusty Relic and the Bolt swords from the game. You’ll also win the Legendary Swords medallion and 150 credits to spend in the Store. 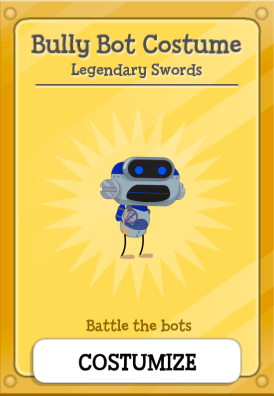 In the past, they’ve also promised a battle arena coming soon—but after about three years of not delivering on this, they’ve stopped showing this message. 😦

The mystery of the battle arena was covered more in-depth in this PHB post. Plus, if you’re interested in costumizing E. Vile’s helmet, check out our Glitching page and search for it among the “ASG” list.