Poptropica’s oldest inhabitants have a problem: someone’s been stealing their stuff! To return what’s rightfully theirs, you’ll explore creepy sewers, pitch-black caverns, and even a giant’s garden in the clouds. See how it all began with the very first Poptropica Island: Early Poptropica!

For walkthroughs on Early Poptropica Island, scroll down.

Head all the way right, passing the sign that says “Early Poptropica.” Talk to all the 8-bit pilgrims in the area to get the scoop: a pig, bucket, and flag have been lost, and it’s up to you to recover them all and save the day.

Go over to the well by the man who lost a bucket, and go down the rope.

Keep going down and you’ll be in the Storage Cavern. Move a little to the left, and jump downward to the left side, where you’ll land on a green platform.

Climb up the rope on the brown platform, then jump onto another brown platform located to the right of the rope you are holding. Now jump up to the platform above you, and grab the Glow Stick!

Trace your steps back and exit the Storage Cavern.

Head left back to Main Street and look for the manhole on the ground beside the Soda Pop Shop. Go down. 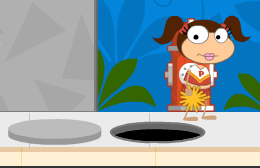 Climb down the rope to enter the pit. Make your way down to the bottom-right corner, careful to avoid the purple spiders that can knock you over.

In that corner, guarded by a giant spider, is the Prized Porker. Grab your prize and stay put for the next step: the golden egg. 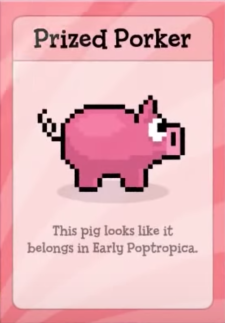 From the bottom of the pit (where the pig was), go all the way to the left and keep going, past the tunnel, and into a dark room. Using your glow stick to see, start at the spot that says ‘Darkness Awaits.’

Now go all the way to the left until you see the first rope. Climb up the rope until you reach a place where you have to go either left or right.

Go right until you pass by two ropes. Climb the second rope at the dead end, and go left until you see another rope. Climb that rope. The words on the wall should say ‘Getting Warmer.’

Once you are up that rope, go left and grab the Golden Egg.

Now go right, past the ‘Getting Warmer’ sign, and climb up some ropes. You’ll soon find your way to the top where you can exit to the Poptropica Towers.

At Poptropica Towers, you’ll want to make your way to the top of the blue building in the far left. But first, a pro tip: you can get a hidden, optional Hypnotic costume in one of the green building windows!

Anyway, keep jumping left on window ledges, the stone statue, and building roofs until you reach the blue building with a little restaurant setup on the roof. Go up the vine in between the tables.

Climb up the vine again, and now you should be in the skies. Go all the way to the right until you see a huge pair of feet.

Click on them to talk to the giant. Give him the Golden Egg and he will lift up his spiky weapon to let you pass.

Now go right, and right again, until you see the gardening shovel. Walk on it as if it were a ramp and you should soon be doing the same to a vine. Now jump off of the vine, and you’ll land on some gigantic vegetables. 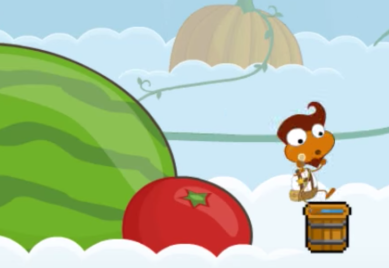 Jump off of the vegetables and pick up the Water Bucket. 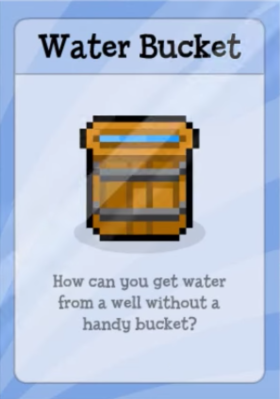 Now go to the right, and right again to the Aircraft Graveyard. Keep going right and grab the Jet Pack on the yellow table. You can wear this item to fly! (This item can only be worn on Early Poptropica Island.)

Put it on and return to the Giant’s Garden on the left. Now you can fly over the shovel to get to the hole in the clouds marked ‘Exit.’ Go down.

You’ll land on top of the water tower on Main Street, and behold… you can now reach the Signal Flag! Take it back to Early Poptropica.

At Early Poptropica, talk to the 8-bit pilgrims who had mentioned losing items, and one by one you’ll return them all: the prized porker, water bucket, and finally, the signal flag. Now it’s time to claim your reward!

Climb down the rope near the pilgrim with the flag, and go right over to the boat, where another pilgrim awaits. Talk to him and he’ll award you your Early Poptropica Island Medallion, plus credits to spend at the store. Congrats!

Looking for more walkthroughs? Check out our Island Help page! 🏝

Note: For a more in-depth guide, scroll up to the Written Walkthrough.