Unravel the mysteries that lie in the caves of Crisis Caverns. A deadly supervolcano threatens Poptropica as we know it! To stop it, you must start an adventure taking you deep into the earth and explore areas that have yet to be discovered.

For walkthroughs on Crisis Caverns Island, scroll down.

For a written walkthrough on Crisis Caverns Island, see below.

Talk to the park guide, and you’ll be given a visitors’ Button. Tacky? Yes, but it’ll be useful later, so save the souvenir.

Head inside the Visitor’s Center, where you can learn about the environment of the park, from the supervolcano to the wildlife (shoddy taxidermy and all), and also about the disappearance of Dr. Crispin Vincent.

On the top floor, talk to the ranger, Rick, standing next to the “Ask Me About Elk” sign and he’ll sigh about how someone plucked the antlers from the elk taxidermy and made off with them. It is your goal to find them now.

To find those antlers, first exit the Visitor’s Center, then go left. At Ye Old Cabin and Mine, hop up to the roof of the cabin, and you’ll find the Elk Antlers.

Go back to the Visitor’s Center, right by Ranger Rick, and click “Use” on the elk antlers. Pleased with the task you’ve accomplished, the ranger will make you a junior ranger for the day and award you a special Junior Ranger Badge. Retrieving fake antlers means that you’re a responsible officer, apparently.

Now, head over to the right, where two professors are talking science stuff. Pretend to listen to them, then show them your well-earned junior ranger badge. They’ll give you a fancy Magnetic Belt. 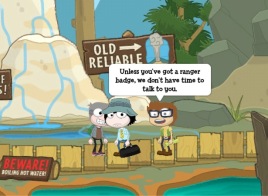 Now go left, past the Visitor’s Center and Ye Old Cabin and Mine, and you’ll arrive at another scene. Navigate your way through the geyser platforms and you’ll reach Crispin Cave at the end. Talk to the park guide, Stanley, and he’ll bring you inside. Stanley will tell you about the story of Dr. Crispin Vincent and his campsite in the cave. 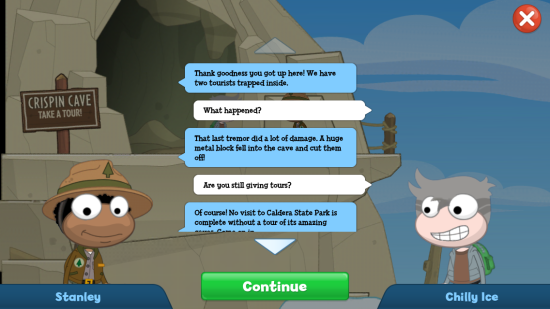 If you look around inside the cave, you’ll see two elderly ladies arguing about who knows what, and they’re trapped by a square-shaped rock!

Move the rock so it falls perfectly into the hole, and the two grannies will be free to leave and “go somewhere even more depressing: Hazel’s house.” Heh. 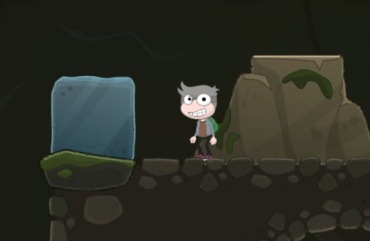 Next, hop up near the entrance where there’s a ledge above. Jump onto it and you’ll see more magnetic square rocks. Jump up and click-hold the rock to get attracted to it, then jump to the tent site and go to the right. 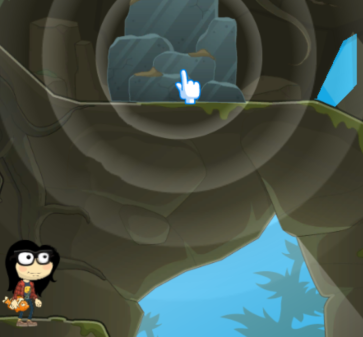 Here you’ll find some holes that need to be filled by more square rocks (let’s call them squarocks from here on) which are nearby. Click-drag the squarocks so they fall in place in the holes. Soon the number of squarocks will increase and the space will decrease. A few more of these puzzles, and you’ll make your way down.

On your way, there’s another big magnetic rock you need to click-drag onto to make it past the wide area.

Now there’s a spring! Not to worry. Pull the squarock from above and put it right into the spring to make it stop.

Next, move forward and you’ll see a rope. Go up using the magnetic rocks to the side, and you’ll see some miners. They warn you not to get any further, but this is Poptropica and you aren’t gonna listen to them, now are you?

Thought not. Keep going, and the screen will zoom out, showing you a ledge you can jump to on your right. You can use the magnetic rocks to help you, but don’t have to.

Once you make it all the way right, there’ll be another squarock, which you should push downwards – and now there’s a DRILL MACHINE! Get on the squarock and jump to examine it, and then… you fall further in…

You’ll end up deeper in the caverns, somewhere with lots of pink crystals. The thermal you were supposed to be looking for on the machine is gone, along with three important drilling parts.

Thankfully, you can find the three drilling parts by exploring. Use the green mushrooms to jump higher and use the magnetic rocks to propel yourself towards new spots to keep moving. You’ll find the three drill parts one at a time, and they’re all in various corners.

First, jump on the mushrooms on the right to get to the Battery. Then drop down and keep going right, then drop down and head left to find the Engine. Finally, go back a little right and up, where you’ll see a squarock. Pull it down and use it to stop the mud spring, then go down and to the right until you reach the Drill Bit. 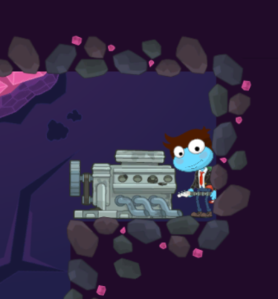 Once you have all three parts, run left and jump back up with the green mushrooms. Make your way back to the drill, which will work again! 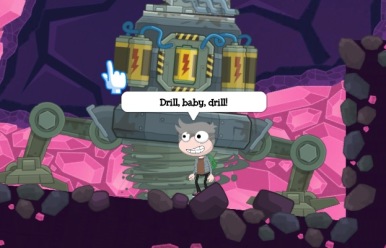 It’ll drill your way into the next scene, which is full of blue crystals – and traps! Going forward, you’ll soon come across a tiny statue, which you don’t have to get and probably shouldn’t, but if you must satisfy your curiosity, push the squarock nearby to the pedestal with the statue so you can reach it. Don’t say you weren’t warned: when you grab it, a rock will flatten you and send you back.

Anyway, push the squarock all the way right, then jump on it to reach the stone gate, which you can open by click-dragging the rock slabs on the gate. Once you’re on the other side, move the nearest squarock right so it lands on the large platform that’s about to crush you, so it’ll hold that up and you can pass by safely.

Jump down and you’ll be at a slope. Run down until you see a rectangular magnetic rock and click-drag it down into the magma with your magnetic attraction powers. This will activate the boulder at the start of the slope, so you have to jump quickly onto the rectangurock, then onto the ledge where it came from, and then down further.

You should try to be faster than me and not let the rock hit you.

Then as you keep going right, jump over some more magma, hop up and push the squarock down. Push it onto the floor platform by the gate to raise it, allowing you into the next area.

In the next room, you’ll find a sliding puzzle with an image of a geometric sun. All you have to do is envision it as it originally was and put it back into place after it shuffles itself. Remember that each piece only moves in one direction – wherever the blank spot is.

Here’s a tip: think of the 3×3 grid as four 2×2 connected grids. Then swap them all (try doing the corners first) until you get the original picture. You can tell where each piece goes by looking at where the frame is on each piece.

Once you’ve completed the picture, it will open up, revealing the laser interferometer from the drill. 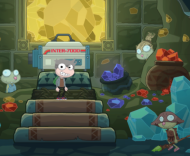 But just as you try to grab it, some spooky cave dwellers, or mole people as they are known, show up and take you to their king. They’ll demand that you give them something to justify your presence in the caves. Fortunately, you’ve got just the thing: the button from the beginning of the island! 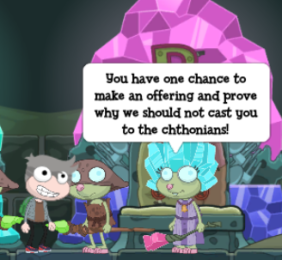 The leaders of the mole people, King Mondo and Queen Bondo, will tell you about their rivalry with the chthonians, which are wormy creatures living in the caverns with them. They don’t know why the chthonians want war with them – and then, suddenly, one such worm creature shows up and grabs the mole king! 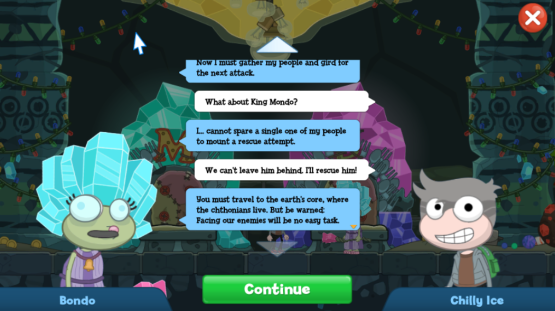 You and the mole people will, of course, run for your lives. Keep running right, and jump when you see little yellow tentacles poking up from the ground – if you run into them, a chthonian will jump up! They can be avoided if you don’t touch their tentacles, but if you do touch them, they may send you back to the beginning of the scene.

As you keep running, the ground will start to break up into platforms, and you’ll have to jump quickly onto them and make it to the end as fast as possible. If you fall, or take too long, you’ll start over at a checkpoint. At the end, click to go right.

You’ll find yourself back in the mole royalty’s throne room. Talk to Queen Bondo and she’ll open up a room behind her throne, which you can enter. 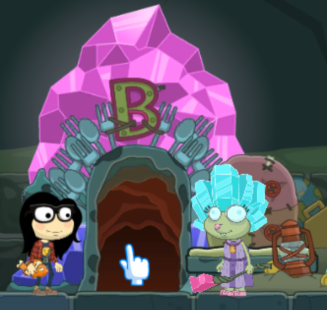 In this volcanic room, run across the platforms, which will fall as you step on them, and jump down. There’ll be a moving platform. Jump on it when it reaches your side and don’t move till it reaches the other side. Then go down.

Now go up some geyser platforms. At the top, keep going forward and down, dodging any chthonians that get in the way. 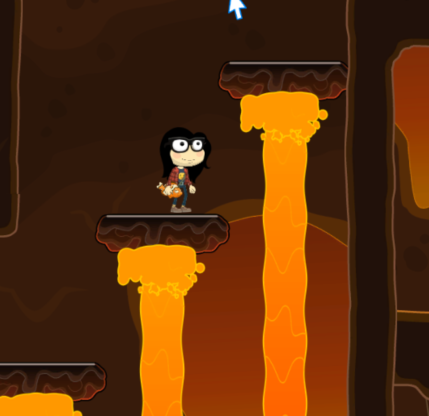 Wait until the chthonian at the very bottom goes right, past the hole, then jump down and enter the hole.

In the next volcanic scene, you’ll have to jump on some more geyser platforms to avoid magma. Run right and you’ll make it to the king, who’s been tied up by the chthonians with a sticky substance he can’t get out of. Talk to him, and he’ll say you need to return the chthonians’ egg from the mole people’s stash of hoarded stuff.

Go back out from the way you came by passing the geyser platforms again. When you reach the first volcanic room, climb the rope to your right and keep going up, then run left and head back to the throne room. Take the Egg from the stash, then go back to King Mondo and click Use on the egg.

With the egg returned, the chthonians will free King Mondo, but now there’s a more pressing problem at hand: the supervolcano is about to erupt! The mole king and queen urge you to return to the surface, while their plan is to stay underground to stop the eruption by sealing the earth beneath.

They’ll run off, and you’ll have to leave through the newly opened hole where the king was freed. Quickly run through the obstacle course of cave settings, using your powers to move squarocks to help you jump to places as needed. The magma will start to rise higher and higher, so move quickly before it gets to you! 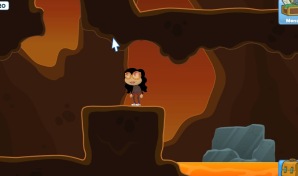 Eventually, you’ll be pushed out of the caverns by an overwhelming force of lava and water, arriving back on the world above. The scientists by the big geyser, Old Reliable, will talk about how the supervolcano isn’t going to erupt after all. Crisis averted!

You’ll be awarded 500 coins and a cool trophy to put in your house. Plus, you can replay the island for more coins. Congratulations, you’ve completed Crisis Caverns Island! 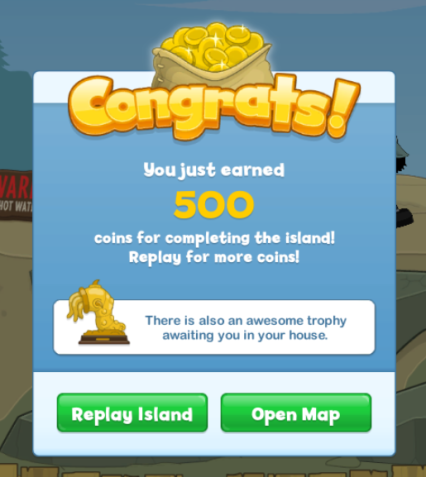 These are the displays from the Visitor’s Center. Click to view the images in full size. 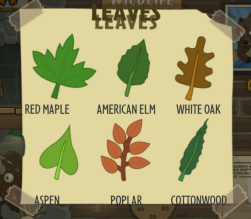 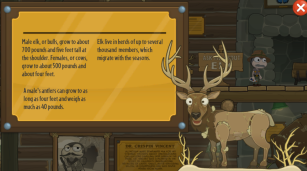 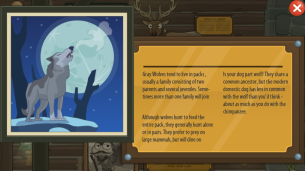 get me out of this cavern
or i’ll cave in