A while back, Skinny Moon posted on the Creators’ Blog (twice, actually) about Popsonas, which is shorthand invented by the Poptropica community to mean Poptropica personas. Such creations have been a longtime tradition among the fandom, and this fun practice continues to this day. In fact, you’re invited to join in.

One’s Popsona tells the story of their Poptropica character, and the details are up to you: you can create a backstory, personality, likes/dislikes, and more! Some of the staff writers here on the PHB wanted to create and share their own Popsonas, so in this post, we’ll be doing just that. Here we go!

Slanted Fish hails from Shark Tooth Island, where she has always admired the swimming fish, including the bright blue betta she adopted from the sea. Born as Friendly Fish, she acquired the nickname Slanted Fish in her youth as a wordplay on her Chinese name. This Fishy finds her home in both land and ocean; bustling cities and secluded islands.

She went on to study many of her passions, including art and writing, at Ephraim University on Mocktropica Island. These days, Slanted Fish works as the editor-in-chief of a Poptropica publication known as the Poptropica Help Blog. She is often traveling around various Poptropica islands to promote the PHB, but also travels to relax and catch up with Poptropicans all over the community.

Born on Monster Carnival Island, Spotted Dragon grew up in an apartment off main street with a distant view of the carnival. Not being much of an extrovert, SD admired the carnival from afar and often just stayed within the comfort of her own home, occasionally visiting the Lazy Sundae Ice Cream shop for a sweet treat. She did small jobs for the local newspaper to earn money and gradually found an interest in photography. Sadly, she had lots of insecurities, especially about her hair that seemed to constantly change shades of brown.

As an only child, SD grew bored of her aging parents’ simple lifestyle and as an adolescent decided to leave home in search of her passion. Inheriting her grandmother’s blimp, she started to fly around Poptropica as a loner, eventually learning how to maintain a constant set of odd photography jobs. Today, Spotted Dragon resides on Home Island, in a house she bought herself. After really finding her personality, she managed to become widely known throughout Poptropica for her tendencies to help everyone she meets, snapping pictures along the way.

She briefly attended Ephraim University, expanding her knowledge on subjects like journalism and discovering her non-traditional name translation of Sydney Doragon, but soon dropped out for financial reasons. Thankfully, she met Slanted Fish and much later earned herself a job working for the Poptropica Help Blog as an author and photographer. SD continues to travel for her work and personal adventurers and has acquired lots of confidence in herself. She shows a great interest in the arts, casual soccer, pride advocacy, and of course her trusty hoodie. She is asexual and panromantic, has a varying INTJ-T and INFJ-T personality, funny in the stupidest of ways, became best friends with Silver Wolf, and loves music.

Who am I? You sure you want to know? The story of my life is not for the faint of heart. If somebody said it was a happy little tale if somebody told you I was just your average ordinary guy, not a care in the world… somebody lied. But let me assure you — this, like any story worth telling, is all about a Poptropican….

I grew up in River City, one of Shrink Ray Island’s cities. I attended River City High, where I was one of the kids on the honor roll. CJ was one of my study buddies back then, and I actually helped her with her shrink ray project. Sadly, I never got to attend the science fair because there was an interstate debate that I had to compete in.

My family later moved to Red Dragon Island, and that’s where I met Jack and Annie, who were my neighbors next door. They showed me the joy of reading books! I instantly fell in love with books, and sometimes you can find me hanging out in the Frog Creek Library past dusk.

Later, I moved to Mocktropica Island to attend the ever-prestigious Ephraim University. The university life was bizarre for me, and I met Slanted Fish, then a college senior who also attended my journalism classes. Upon reading one of my essays, she invited me to take part in the journalism club, which then grew into the renowned Poptropica publication, the Poptropica Help Blog.

Today, I continue to quench my thirst for learning, travel to many Poptropica islands, write poetry, and watch world-famous musicals on Back Lot Island. 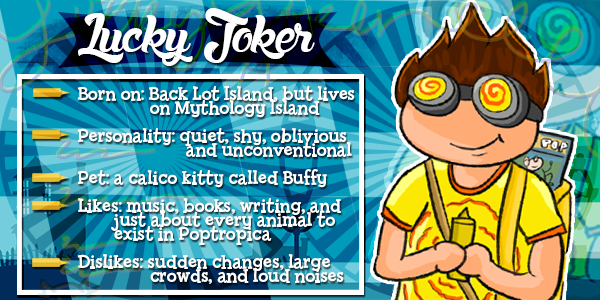 Lucky Joker was born on Back Lot Island and lived on the overlooking hills of the island for most of his life. He’s an only child and often did things on his own since he didn’t have many friends to play with. He found various ways to entertain himself like coloring and solving puzzles, but what he likes to do most (and still does today) was learning.

Lucky gained an interest for Greek Mythology, in particular, and in the pursuit of his own happiness, packed up his bags and moved to Mythology Island. Currently, he studies Greek history, art, literature, and mythology, while still having the time to enjoy the peaceful environment his new home offers him. He also writes on the widely-known Poptropica Help Blog to practice his writing – another favorite pastime of his. 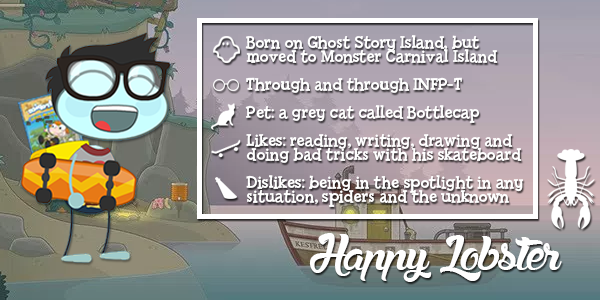 Happy Lobster was born and grew up in Ghost Story Island. There weren’t many children who lived on the island, but he made friends with a boy who held a perhaps unhealthy interest in tinfoil hats, and another boy with a red bolt across his face who had come from Astro-Knights Island with his parents. But Happy Lobster was intrigued by all the Poptropicans who came by on yellow blimp to try and solve some enigmatic problem the island harbored.

When he reached 18, he visited the Trading Post at Wild West Island, where he discovered an old yellow blimp – just like the ones he had seen arrive multiple times on his home island! He received it in turn for giving up one of his modern ghost comics, which the owner was more than happy to read about, seeing as he was from a totally different time. At once, with his new blimp, Happy Lobster decided to roam around the world of Poptropica, and stop off at islands where there were unusual rumors, such as dangerous forest creatures and vampires kidnapping seemingly random girls – who knew Poptropica was such a mess nearly everywhere these days?

Soon afterwards, Happy Lobster attended Ephraim University, and met Slanted Fish, Spotted Dragon, Slippery Raptor and Purple Claw… the last of which looked very similar to one of his childhood friends. Towards the end of his time at the university, Slanted Fish decided to make a blog about all the wonders of Poptropica – and invited some of her university friends, including Happy Lobster, to join her in writing it! 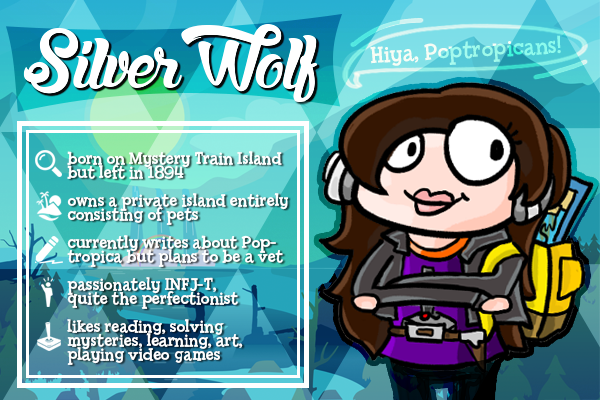 Silver Wolf was born on Mystery Train Island and lived there until she saved the Chicago World Fair from peril in 1893. At the time, she was defined by her iconic purple hair and inspector-like clothing. The event sparked a desire in her to solve more mysteries, so she traveled all across Poptropica to help others, gaining small amounts of money along the way. Once she saved enough, she bought her own private island to live with her many pets: cats, dogs, parrots, hamsters, you name it!

She settled down on her island until the 21st century, when she decided she wanted to do more with her (very long) life. That’s when she started to blog about the world. She also changed her 19th-century outfit to a more modern one, including a joystick t-shirt and headphones.

Since she hasn’t seemed to age, no one knows when exactly when she is going to fulfill her dreams of being a veterinarian, as she seems content as she is. However, what is known about her is that she mainly keeps to herself, enjoys reading fantasy and adventure books, and plays a multitude of video games; it seems as if she keeps interests of the old and modern.

Purple Claw was born in the great land of Arturus of Astro-Knights Island, and lived there with his mother until he became seven. They moved to Ghost Story Island after PC’s 7th birthday to take care of his grandparents. Over there, he only had two friends, one of them being Happy Lobster.

When Purple Claw turned 18, he got an email from the PND (The Poptropica Nature Defenders) to go on a trip to Nabooti Island to find the missing jewels. PC was absolutely stunned by their proposal, and joined the adventure. Besides the jewels, Nabooti Island had so many beautiful places to visit, that he even made a blog post about his adventure! And ’til this day, he still documents all of Poptropica’s wonders whenever he goes on adventures on his blog!

A year later, Purple Claw attended Ephraim University, and met Slanted Fish, Slippery Raptor, Happy Lobster and Spotted Dragon. The best part was that he met one of his childhood friends there, him being Happy Lobster! He also became an author on a Poptropica publication: the Poptropica Help Blog, run by those friends, a couple of months later.

During his free time, PC likes reading, drawing, writing, playing video games, or taking long walks with his owl, Silver Acorn. Or, if he’s not doing any of this stuff, he’s probably sleeping. 😛

Thanks for reading our Popsona stories!

Now tell us, what’s your Poptropican’s Popsona like? Feel free to share down in the comments, or post on social media with the hashtag #MyPopsona so even the Creators can see it and possibly re-post it! We’d love to hear your story!

38 thoughts on “PHB Special: #MyPopsona from the PHB Team!”