This is the My Place in Poptropica story of Smart Flame, who played Poptropica when he had a computer to do so. See below for details on sending in your own MPIP! 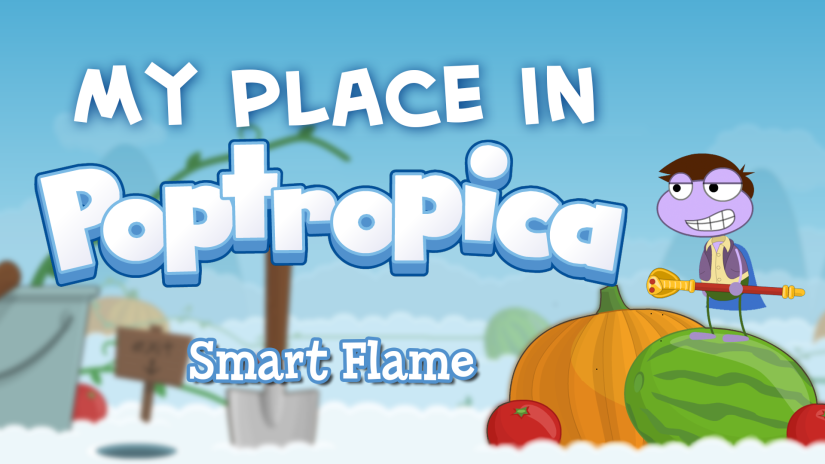 It all started in 2010, when I was only five years old. I saw my brother playing a game with a title I couldn’t quite yet pronounce, and I wanted to play as well.

That led me to create my first account, Fierce Eagle.  I instantly fell in love even though I couldn’t beat an island. Unfortunately by the end of the year, our 2008-model computer was practically busted, and with my brother glued to the other computer, playing Poptropica wasn’t an option for me.

By January of 2011, I had stopped playing. I forgot about the one thing that brought me to the game, that me and my brother had this in common. I didn’t even bring the thought of Poptropica to my mind throughout 2011.

In the year 2012, we got a new computer, since the old one finally bit the dust. Although at this point I didn’t remember Poptropica, my brother brought it back into my life. With Fierce Eagle forgotten, I then became Blue Eagle, which leaves me still wondering, why two eagles?

But that passed, and now all I could ever wanted happened: I beat Reality TV Island and Super Power Island. I also was able to get farther progress on the other islands, making me get to the challenging parts of the islands, which kept me more interested.

I also discovered common rooms, and I was instantly amazed. The thought that there so many other people playing Poptropica, and that I could interact with them, started my journey into the community. Poptropica was once again the best thing ever – well, until 2013.

I began to take school more seriously, and I hung out with my friends a lot, so Poptropica became an afterthought. Also when my brother stopped playing, I had no one around me that played, so I wasn’t motivated to play. Another reason was that I had beaten the easier islands, and the ones that were left were too hard for me. Plus, my brother needed the computer for more important matters, so I rarely had computer time to play.

In 2014, I got my own personal Chromebook laptop computer, and I randomly joined Poptropica with my Blue Eagle account.  The memories came back, and I realized that I missed so many changes in Poptropica.

I tried looking up guides for islands like Astro-Knights, and Skullduggery, when I came across the PHB. I started reading the blogs, becoming a stalker who read every post and comment ever written. I was especially interested in the costume contests because they involved Poptropicans so much.

During this time I also picked my two favorite islands, which are Mission Atlantis and Reality TV island.  I really grew into knowing what Poptropica is all about and completing everything I could. I felt like I had grown further in my journey to becoming a part of the Poptropica community.

I finished my 51st island in April, which to me was a major accomplishment, considering for that for two years I couldn’t beat a single island.

Fast forward to October, when I decided to comment to enter the PHB’s Halloween costume contest. And something surprised me – Slanted Fish replied to my comment! Even though it was just to tell me my link didn’t work, I was ecstatic. For years I had felt like only royalty could be witnessed by her, but here I was squirming with excitement. I didn’t waste any time to reply, indicating my excitement, and made sure my link worked this time.

After that, I continued to comment everywhere. But the place where I felt the most like a part of this community was the PHC, where I talked a lot and still do. On the PHC I found other players, and what was even cooler was our ability to talk about anything we wanted to.

My current account, Smart Flame, is my favorite, and my username is LMSEC if you want to friend me. Someday, I plan to make my own Poptropica blog and continue to grow in this community.

Hope you enjoyed this “My Place in Poptropica” story! Feel free to send in your own (please include a minimum of 550 words, type with good spelling and grammar, divide it into labeled sections, and include your username). Look out for more community MPIPs every weekend!

9 thoughts on “My Place in Poptropica: Smart Flame”