Well, this pretty much settles it. Poptropica is going to have its own show. 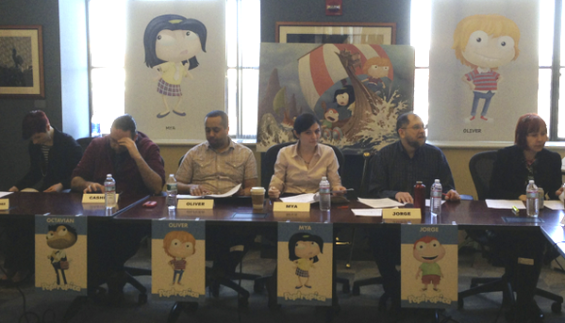 This picture was tweeted from the official Poptropica Twitter with the caption “Poptropica script read????”. The picture above (which the PHB lightened a bit from the dimmer original for more contrast) shows a number of people with labels in front of them (character names from the Poptropica comic/upcoming graphic novel: Octavian, Oliver, Mya, Jorge).

Each person presumably has a script in front of them, and various polished pieces of art that look like something from the comic are hanging in the background throughout the picture. I researched a bit and found out that this seems to be a read-through –

The read-through, table-read, or table work is a stage of film, television and theatre production when an organized reading around a table of the screenplay or script by the actors with speaking parts is conducted. Read more

So wait… is Poptropica going to have a cartoon based on the Poptropica Comics?

We’ve been seeing a lot of colored and polished artworks from the comic being released on Twitter, but we assumed it was for an upcoming graphic novel (which has been confirmed). And weren’t we supposed to be getting a Poptropica Comic sponsored quest or island this year?

One more thing that may tie it all in – remember my post a while back on the Poptropica animated short? The pitch made by a random studio for a Poptropica cartoon? Has it been in the works for over a year? Only time will tell. This is certainly exciting! Tell me in the comments what you think, and also tell me if you’ll be watching the Poptropica cartoon if it really is coming out!

28 thoughts on “A Poptropica Cartoon?”