Hey Poptropicans, there’s a new ad building around Poptropica for the upcoming Dreamworks animated movie How to Train Your Dragon 2, coming in 3D starting June 13! I found this on Main Street of Mythology, and it’s a common room too, so you can chat and battle with other players! 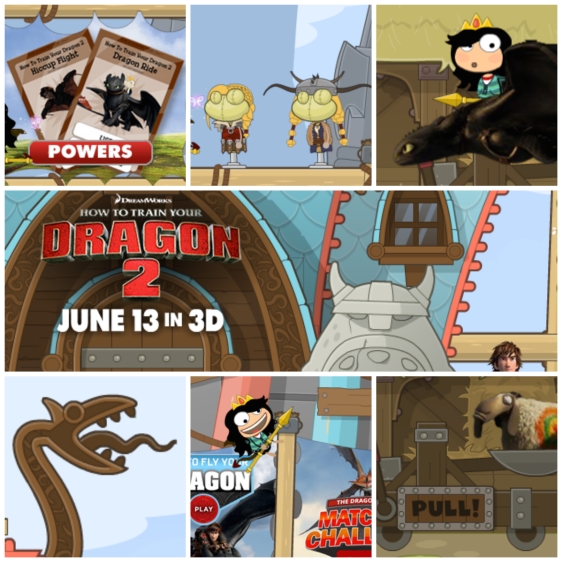 As you can gather from the collage, there’s quite a bit to explore – on the left, you can watch a trailer, read the movie’s synopsis, customize from two dummies with cool berserker costumes, and claim two power cards: Dragon Ride (which places your Poptropican on Toothless the dragon) and Hiccup Flight (which shows Hiccup zooming around on a dragon).

On the right, you get to click on two different games to play, both of which will lead you to a new tab – How to Fly Your Dragon and The Dragon Trainer Matching Challenge. You can also click on a catapult with a sheep on it to fling it and conjure up some dragons.

(UPDATE!) There’s also a video ad in between places (such as underwater on Mission Atlantis) for Dragons: Defenders of Berk (Part 2), now on DVD. (This is a series related to the How to Train Your Dragon films.) Watch the video, and you’ll be awarded Hiccup’s Shield, which “protects you from fire” (see images below) when you press the spacebar. Basically, it summons some glowing blue light which swirls around your shield for a moment. /end update

On a different note, a Poptropican named Zippy Berry was featured today on the Creators’ Blog because she “made it through to tomorrow’s semifinals in the Scripps National Spelling Bee.” I don’t know who she is, but she must have some special connection to at least one of the Creators to get such a mention on the official blog! Well, whoever you are, Zippy Berry, congratulations. 🙂

Anyway, don’t forget that this Sunday we’ll be publishing the next issue of the PHB magazine, now known as POPCORN! We’re accepting entries at phbpopcorn(at)gmail.com (at = @).

11 thoughts on “How to Train Your Dragon 2: Poptropica ad”