Yes, the winged creatures. These birds of all kinds, from seagulls to owls to woodpeckers, will quite frankly be haunting your life in Survival Island. These are the Survival Files, and danger awaits…

Let’s discuss the birds that we may be seeing in Survival Island. In some of the early pictures from Reality TV Island (which is based off of Survivor), the main setting was a mountain theme. In one such sneak peek that never became a reality, a seagull and its nest are shown.

In Survival Island, one of your main goals is to survive, and one way to do that is to find something to eat. Comic Kid is not sure if the bird would like it if he were to eat the eggs laying inside the nest. 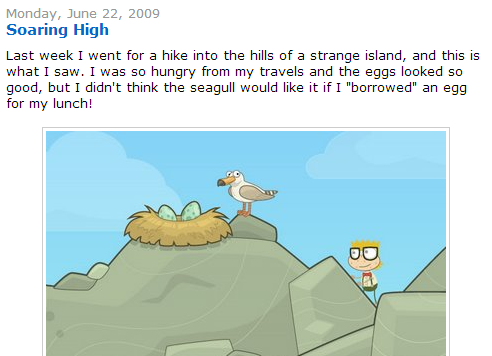 As we know from the Daily Pop, one of the items from Survival Island is a nest.

But enough about seagulls — let’s talk about owls. In a Daily Pop from a few months ago, an owl in horrible shape is shown. He seems to have fallen apart, but it’s probably for the animation pivot points. This owl also seems to have multiple babies (then again, perhaps it’s just the process of animation).

Perhaps this will be the final boss of the owls, because this island appears to house many other owls. From the looks of it, they will be jumping out at you for the most part. 😛

Besides seagulls and owls, it looks like woodpeckers will also appear on Survival Island. You can find one flying through the forest in the desktop wallpaper.

And that’s just the birds! Tune in next time for More on the Story of Survival Island. 😉

7 thoughts on “The Survival Files: the Winged Creatures”