Three years. We have come this far. 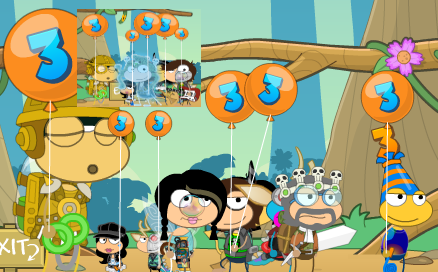 Three years ago on July 26th, 2008, the Poptropica Help Blog was created by an 11-year-old girl and the support of her younger brother, collectively known, as some old-timers may recall, ‘Scary Tomato’ (the Poptropican’s name), then later as ‘Hijuyo.’ It turned out the girl was mostly the one running the blog, so she started going under the name ‘Hijuyo’ independently and writing posts with other hired blog authors.

Three years later it’s July 26th, 2011, Hijuyo is now 14, the blog has over 5 million views, a great community, and awesome contributors everywhere. We have invited everyone who wanted to come celebrate, and come they did. The PHB just celebrated their big 3|Three party on our chatroom, the PHC, and met in Multiverse with tons of supporters coming to inflate their “3” balloons (of varying sizes!) from Poptropica’s own 3rd birthday. It was also our third Author Night, and people were able to meet and talk with some of our great PHB authors. Hicoga made a video of the party you can watch here.

These three years were also Hijuyo’s three middle school years, and though I would probably never delete the PHB, high school would mean I may have less time here. Which is why, for everyone’s enjoyment, the PHB comments are now set so that a comment made can immediately go through instead of me having to manually approve them. Hopefully this will bring more discussion in each post as people can read and respond to each other quickly – however, authors will still need to monitor the comments to make sure they don’t get out of hand and everyone has to be responsible in following commenting rules. I will still be around, although I do hope everyone in the community does their part in helping the PHB continue to prosper.

Long live the PHB and the rest of the network!