For as long as players could obtain cool costumes, Poptropica glitching has been used to give people a leg up when it comes to awesome account alterations. What exactly goes on in the underground world of Poptropica glitching? Here’s an overview from the PHB.

Put simply, a glitch is something that is not supposed to happen. There are bad glitches: for example, when you know you got an item during an island quest, but it’s gone the next time you log in. Those are the bugs people report to Poptropica to have them fixed. But hold on – that’s not the type of glitch we’re talking about. We’re just getting started!

When it comes to “good” glitches, we don’t want them patched. These types of good glitches are exploits unintended by Poptropica, but found and used by players to make unallowed alterations to their accounts or gameplay experience.

Some of the earliest major examples of such glitching came from a Poptropican known as Codien, whose knowledge of Poptropica’s inner workings allowed him to offer some cool costume parts to fellow players in the community. From bushy beards to monster marvels, for the first time ever, Poptropicans were able to enjoy some uncostumizable costume parts (known as rares) through PHB giveaways!

Another well-known early glitcher was Coderkid, also known as Motionman95. Using his then-active Poptropica Help Forum (PHF, a branch of the PHB) as his promotional space, Coderkid created and announced several Poptropica projects that would allow players to perform various cheats. In order to do this, Coderkid used his knowledge of coding and Poptropica files to code his various tools. While the tools are no longer available, they will be mentioned here for posterity’s sake:

For a while, it was also possible to create dummy accounts through requesting from the few who knew how. These were mannequins you could Costumize everything from, including handheld items. However, they can no longer be created, and any that remain will become normal Poptropicans if they are ever logged into. The PHB has some dummies listed on our Friend Finder page if you’re interested.

Yet another form of Poptropica glitching around this time came in the form of teleportation tools, which allowed you to teleport to certain areas of islands as well as some old advertisement rooms (useful for getting retired ad prizes). These no-longer-working tools included PopLaunch by Adiboy, PopTravel by ScripterKid, and the Poptropica Ad Transporter by ScripterKid and 64MCY.

As more rare items leaked throughout the Poptropica community through various breakthroughs and limited edition items became rarer with the passage of time, collecting rare items became status symbols among many Poptropicans. Sometimes, the fashionability of an assembled costume didn’t even seem to matter. To collectors, all that mattered was the pursuit of the uncostumizables. 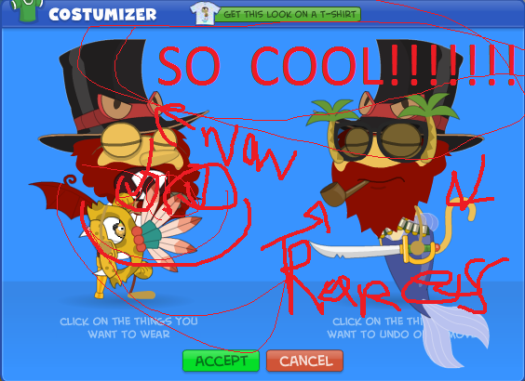 With the advent of methods like the Avatar Studio Glitch (commonly known as ASG), SUI (Sound-Updated Island) Costumize Everything Glitch (CEG), Friend CEG, and so on, those who knew how to operate such tricks would use them to obtain rare coveted items for themselves or to trade. Glitching became a whole industry.

On places like the PHC (the PHB chat), exchanges about who had what costume part and how to get it were hot topics among aspiring collectors, for which this became a hobby. Trading was the solution for spreading rare parts: if two parties had a rare item that the other wanted, they could perform a trade to give each other what they were looking for.

However, trading in the black market of uncostumizables (for that was what it had become) involved trust that was unfortunately sometimes broken. With scammers not holding up their end of the trading deals, as well as hackers getting into people’s accounts to take rare parts, the art of “glitching” had become a bit of a risky activity. Some Poptropicans even quit the game over all the cheating and scamming that went on.

These were greedy times, when there was a huge gap between “rich” and “poor” (in terms of how many rares one had), but over time, the gap began to lessen as more rares were leaked through the spreading of methods and generous giveaways. However, it wasn’t always glamorous: at a time when many things were still rare, it was not uncommon for those who were “rich” in rares to curse at those who tried to undermine their status by giving away rares, which would of course render them less rare.

Despite the ugliness surrounding the art of glitching, many Poptropican rare-collectors were proud to call themselves glitchers, the term used to describe those taking advantage of such glitches.

Distributing the Goods (2015–beyond)

While the black market of glitch trading had become a dangerous place for many Poptropicans, filled with the drama of who hacked who and what coveted item had gotten leaked, it wasn’t the end.

Some kinder Poptropicans would take it upon themselves to share their knowledge of the glitching world and freely give away ASG-able accounts and other info. Well-known examples include Mashimai’s Poptropica Glitches & Cheats Help YouTube channel, which posts many videos of ASG accounts, as well as Keith Sammut’s website, which offers a plethora of glitching info. Even the PHB had a long list of ASG accounts on our Glitching page.

Our biggest breakthrough yet came in 2015, in the form of a secret method shared with us (the PHB) by a retired player who called himself Dr. Snowball. Using this method, we have been able to obtain just about any Poptropica costume part in existence, give new accounts custom names, and more. With this method being so powerful, we decided it was best not to share it with the public – not only would it possibly get patched, but it could also be abused in the wrong hands.

However, we still wanted to do something with it, so our plan has been to share the goods but not the secret. After lots of hard work collaborating with experienced glitchers Red Lizard, Zerror, and Grumpy Wolf, on Christmas Day 2015, the PHB released the Avatar Studio Gift: a collection of ASG accounts filled with rares that looked good in all their glory. It comes with instructions! Check it out!

Not long after, we also released the Custom Name Genie, where we use the same secret method to create custom names on new accounts (unfortunately they do not work on pre-existing accounts). This service continues to run today with the help of Keith Sammut, Red Lizard, Grumpy Wolf, and Zerror. If you’re interested, fill out the form on our Cheats page and you’ll receive your request soon!

In early 2016, a tool known as iPop was made for the Poptropica public by Santorno. With iPop downloaded, users can easily modify their Poptropican account to their liking. iPop can add any items to your account, add any clothing features to your character, give you a 5-star battle-ranking, and more!

This highly efficient tool is still in use and the PHB can vouch for its credibility. You can download it here, and if you need further instructions, check out the PHB’s Glitching page.

With these distribution services, the Poptropica Help Blog hopes to allow more players to enjoy amazing otherwise-unattainable items and creative custom names without the risk and ambiguity that once plagued the Poptropica glitching world. Using unconventional glitches to get cool stuff may not be what Poptropica intended, but Poptropica wouldn’t be the same without their glitching community.

Maybe glitches aren’t so bad after all. 😉

for more Poptropica goodness, check out our Pop Plus page! 🙂

41 thoughts on “Overview of Poptropica Glitching”